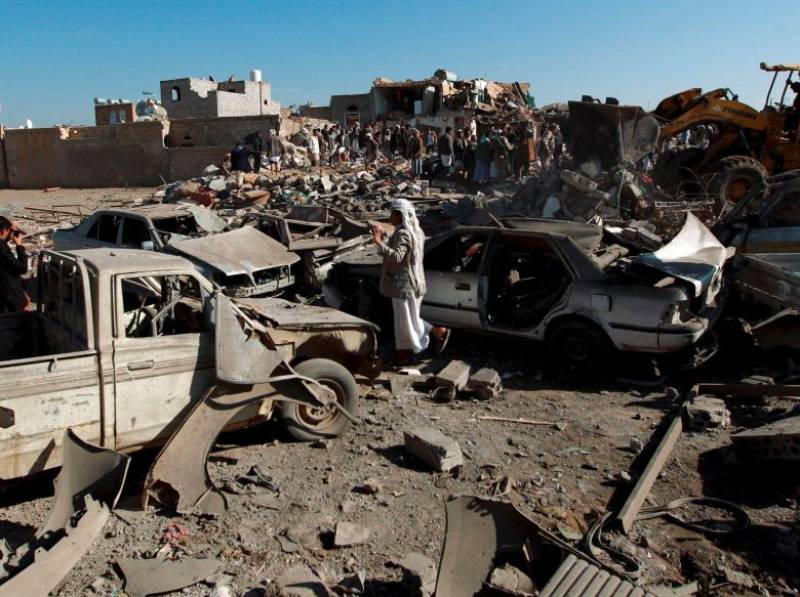 BEIRUT (Agencies) - Iran demanded an immediate halt to Saudi-led military operations in Yemen on Thursday, after warplanes from Saudi Arabia and a coalition of Arab allies including Egypt, Jordan and Sudan began conducting strikes against the Iran-allied Houthi forces fighting to oust the country's Western-backed president.

At least 25 people were said killed in the overnight and morning attacks.

Early on Thursday, Saudi-owned al-Arabiya TV reported a ground offensive with troops from other Muslim states was being prepared. Earlier this week, Yemen's foreign minister publicly called on Gulf Arab states to help prevent the Houthis from gaining control of Yemeni airspace.

Iran's foreign ministry called Saudi-led airstrikes against Shiite Muslim rebels in Yemen a "dangerous step", and said they would only worsen the crisis in the country.

The statement from Tehran came after Saudi Arabia launched airstrikes, along with Jordan and possibly other predominantly-Sunni states, targeting military installations in Yemen held by the Houthi rebels who are storming south in a bid to secure their hold on the country.

Iran's Foreign Minister Mohammad Jawad Zarif called for an immediate stop to the airstrikes, according to the Al Jazeera television network.

Iran, the world's Shiite Muslim powerhouse, is seen as backing the Houthis, who are also allied with former Yemeni strongman Ali Abdullah Saleh.

Tension between Tehran and Sunni Muslim states, including Saudi Arabia, has flared amid the ongoing wars in Iraq and Syria.

In addition to the Houthis, Iran provides support -- and in some cases, direct military aid -- to Shiite militias fighting against ISIS and other Sunni extremist groups in both of those countries and others in the region.

Some of the airstrikes hit positions in Yemen's capital, Sanaa.

The initial statement from Iran Foreign Ministry spokeswoman Marzieh Afkham did not name Saudi Arabia but called the airstrikes an "invasion."

Pakistan, Jordan, Morocco and Sudan were also taking part in the operation in Yemen, the Saudi Press Agency reported Thursday. According to the Saudi official who announced the action Wednesday, there was a coalition of "over 10 countries" taking part.

The White House said in a statement late Wednesday that the US was coordinating military and intelligence support with the Saudis but not taking part directly in the strikes.

Yemen is on the brink of violent collapse. On Wednesday, President Abed Rabbo Mansour Hadi, a close U.S. ally, fled the country by sea after the rebels started taking over the southern port city of Aden where he had sought refuge.

They also briefly seized the airport in Aden, but were later fought off at that site by forces loyal to Hadi.

Meanwhile, the Syrian state news agency said a Saudi-led military operation launched in Yemen on Thursday was an act of "blatant aggression".

"Gulf war planes led by the regime of the Saudi family launch a blatant aggression on Yemen," read a headline carried on the website of the state news agency SANA.

The Syrian government led by President Bashar al-Assad is an ally of Iran, which is in turn allied with the Yemeni Houthi rebels who are fighting to oust the country's U.S.-backed president. Saudi Arabia and other Gulf states have been important sponsors of the insurgency against Assad.

The Syrian crisis now in its fifth year has been another major theater where Saudi-Iranian rivalry has played out in a regional conflict that has taken on a sectarian dimension pitching Sunni and Shi'ite Muslim against each other.

Shi'ite Islamist-led Iran has given military and financial backing to the Syrian government led by Assad, a member of the Shi'ite-linked Alawite sect.

The Iranian-backed Shi'ite Lebanese group Hezbollah has battled alongside the Syrian army against the Sunni-dominated insurgency, which has been sponsored by states including Sunni-led Saudi Arabia and is now dominated by jihadist groups.