10 deadliest earthquakes recorded in the world till date 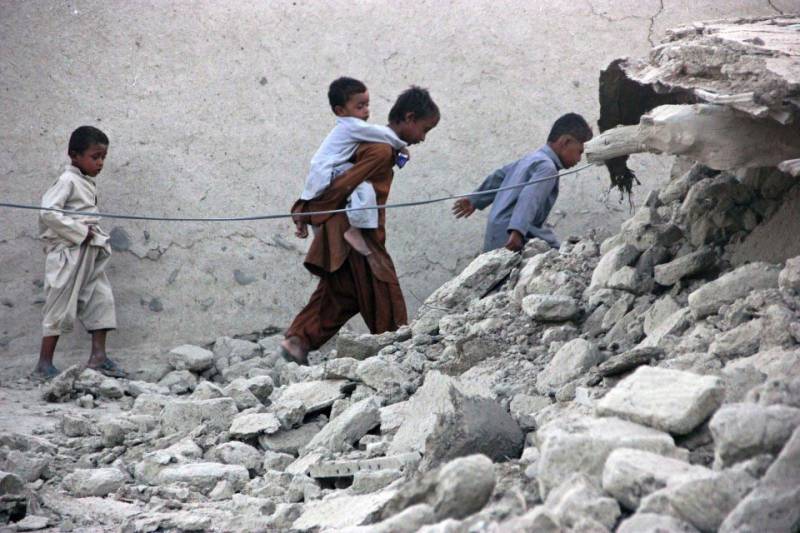 LAHORE (Web Desk/Agencies)  - At least 111 people were killed and scores injured after a powerful 8.1 magnitude earthquake jolted the country on Monday (October,26). The epicentre of the earthquake was the mountain region between Pakistan and Afghanistan. The tremors were felt in many regions in India.

Here are the 10 deadliest earthquakes recorded till date:

1.Azad Jammu and Kashmir: Kashmir witnessed a devastating earthquake of magnitude 7.6 on October 8, 2005. A total of 85,000 casualties were reported, and over 69,000 people were injured. It rendered more than four million people homeless. The earthquake was also felt in Tajikistan and Western China. The world donated approximately USD 5.4 billion as aids for the Kashmir earthquake.

2. Sicily, Italy: On January 11, 1693, the Italian city of Sicily was struck by an earthquake of 7.4 magnitude. The natural disaster caused about 60,000 deaths and spread across 70 towns and cities in Italy. It was followed by another disaster, a tsunami near the city of Catania, making it one of the most destructive earthquakes in Italy till date.

3. Tabriz, Iran:Iran was hit by a devastating earthquake on April 26, 1721. It razed the city and caused deaths estimated between 8,000 to 2,50,000. The damage rendered the city of Tabriz powerless and aided the Ottomans in gaining control over it by 1722.

4. Shemakha, Azerbaijan: The country bordering on Western Asia and Eastern Europe experienced an earthquake of 6.9 magnitude in November 1667. It caused a damage of about USD 25 million in the 17th century. The natural disaster had a focal depth of 12 km and caused over 80,000 deaths.

5. Lisbon, Portugal: Known as the 'Great Lisbon Earthquake', this disaster played an important role in the modern day seismology and earthquake engineering. Measuring a devastating 8.5 to 9 on the Richter scale, it completely demolished the city of Lisbon in Portugal on November 1, 1755. The casualties are estimated between 10,000 and 1,00,000. The massive damage led to extensive scientific research on the earthquake phenomenon.

6. Izmit, Turkey: The city of Izmit in Turkey was hit by an earthquake on August 17, 1990. It measured 7.9 on the Richter scale. Although the earthquake lasted only 3.7 seconds, it was long enough to cause lasting damage. The death toll was 17,127, with 43,959 people injured and over three lakh becoming homeless. Over one lakh houses were razed and 6,000 buildings were severely damaged.

7. Calabria, Italy: The city of Calabria was hit by a series of earthquakes in 1783. Five earthquakes originated in the city from February 5 to 7 and on March 1, also leading to two tsunamis. The maximum recorded magnitude during this series of disasters was 7.9, causing almost 76,000 deaths.

8. Yungay, Peru: The earthquake in the South American nation of Peru was an undersea earthquake, which occurred on May 31, 1970. Recording a magnitude of 8, the earthquake affected over three million people. The cities of Yungay and Ranrahirca were covered in snow, ice and rock due to an avalanche on a nearby mountain. The entire city was ruined, with more than a million people becoming homeless, 25,600 going missing, 1,43,331 injured and 74,194 dead. The country suffered a loss of over half a billion USD.

9. Rudbar, Iran: Another earthquake that shook Iran occurred on June 21, 1990. It resulted in 40,000 fatalities, left 60,000 people injured and more than 5 lakh were rendered homeless. The earthquake originated about 200 km from Tehran and razed approximately 700 villages across the cities of Rudbar, Lushan and Manjil in Iran.

10. Nankaido, Japan: Japan is known to suffer from earthquakes most frequently, and the country has seen some of the deadliest earthquakes in the world. The earthquake off the coast of Nankia occurred on September 20, 1498 and claimed as many as 31,000 lives. Its tremors reached up to the Boso Peninsula in the eastern edge of Tokyo Bay and the Suruga Bay on the Pacific coast, destroying the statue of Buddha at Kotuku-in.