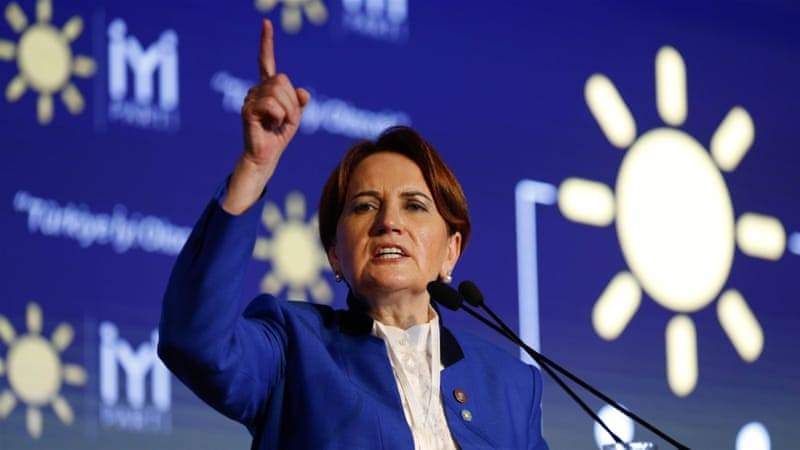 ANKARA – With a slogan "Turkey will be good,” former Turkish minister Meral Aksener has launched a political party, which is being considered as a potential rival to President Recep Tayyip Erdogan and his party.

A ceremony regarding the launch of the party named the Iyi (“Good”) Party was held in the capital Ankara. The party promises to change the political climate of the country.

Speaking on the occasion with an aggressive tone, Aksener, 61, apparently slammed Erdogan’s government over the trial of nationals saying, "Turkey and its people are tired, the state is worn down and public order is unraveling”.

Once dubbed Turkey’s Iron lady, Aksener said, "There is no other way [for Turkey] than a change in the political climate," adding "Democracy is under threat and the government's justice is above all else”.

"The primary quality of the state should be fairness for its own people".

Aksener, known as a right-wing politician, gave the defiant speech amid party’s blue and yellow sun logo and posters of Mustafa Kemal Ataturk, the pioneer of modern Turkey.

Underling the party’s purpose, she said: “We have hope. We have dreams. We want a rich Turkey. We have strength. We want a fair Turkey... we want a free society. We want a happy Turkey”.

Aksener was a member of the opposition right-wing Nationalist Movement Party (MHP) and was expelled in September 2016.

Now it is expected that Aksener will take part in presidential elections against Erdogan in November 2019 when Turkey’s parliamentary system will formally turn into an executive presidency.

It is notable that Erdogan’s AK Party had bagged on 41 percent votes during the previous parliamentary election in 2015 against 49 percent in 2011, showing a steep decline. After winning the election, he hoped to achieve more than half of registered voters in 2019.

Erodgan's government survived a military coup in 2016 in which more than 240 people were killed. Since the coup, Turkish authorities have arrested over 50,000 people and suspended 150,000 officials including teachers, soldiers, journalists and lawyers for allegedly supporting Islamic preacher Fethullah Gulen.

Islamic-leaning AKP had failed to secure an outright majority for the first time since coming to power in 2002 losing some seats to new party, the HDP or Peoples’ Democratic party.

The party, which represents Kurds and liberals managed to get 12 percent of the vote and 80 seats in the 550-member parliament.