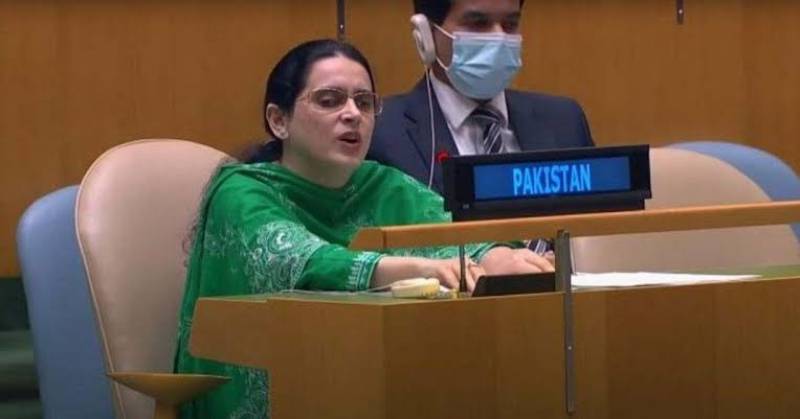 NEW YORK – Pakistan’s first visually impaired diplomat, Saima Saleem, hits back at India over its claim at the United Nations that occupied Kashmir is its integral part.

In her speech at the world forum, Saima used Braille as her means to chide the neighboring country over its false claims at the United Nations. India’s gross violation of human rights in occupied Kashmir is well documented, she said in the speech.

Following the speech of PM Imran Khan, in which he criticized the world for its silence on inhumane actions in occupied Kashmir. India’s first secretary responded that Pakistan played the ‘victim of terrorism’ and alleged the South Asian country of keeping terrorist havens.

In a fitting response to the Indian allegations, Pakistani representative said “Occupied Kashmir was not a so-called integral part of India nor is it India's internal matter and India remains in occupation of an internationally recognised disputed territory whose final disposition needs to be decided in accordance with the democratic principle of a free and impartial plebiscite under UN auspices, as provided for under numerous resolutions of the Security Council”.

Saima also mentioned that Human Rights Watch and Amnesty International have expressed serious concerns about India’s human rights violation including in the occupied territory and not surprisingly, Indian authorities have failed to respond to any of these communications.

Meanwhile, the befitting reply to India at the world forum from the country’s first visually impaired diplomat has won the hearts of Pakistanis.

Pakistan's permanent representative at the United Nations also felicitated her. “I congratulate Saima Saleem, my team member, for successfully putting forward Pakistan's position by exercising the right of reply”, he said.

Furthermore, Info Minister Fawad Chaudhry also hailed her as he took to Twitter for sharing the proud moment for Pakistan. Chaudhry wrote, “Saima is visually impaired but the way she spoke seems her heart can see everything, you have made us proud”.

Saima Saleem exercising right of reply in UNGA, Saima is visually impaired but way she spoke seems her heart can see everything, you have made us proud @SSaima11 Thank you @PakistanUN_NY @ForeignOfficePk https://t.co/y15xOzvBPr

She has also received a number of awards including the Fatima Jinnah Gold Medal and the Quaid-E-Azam Gold Medal.