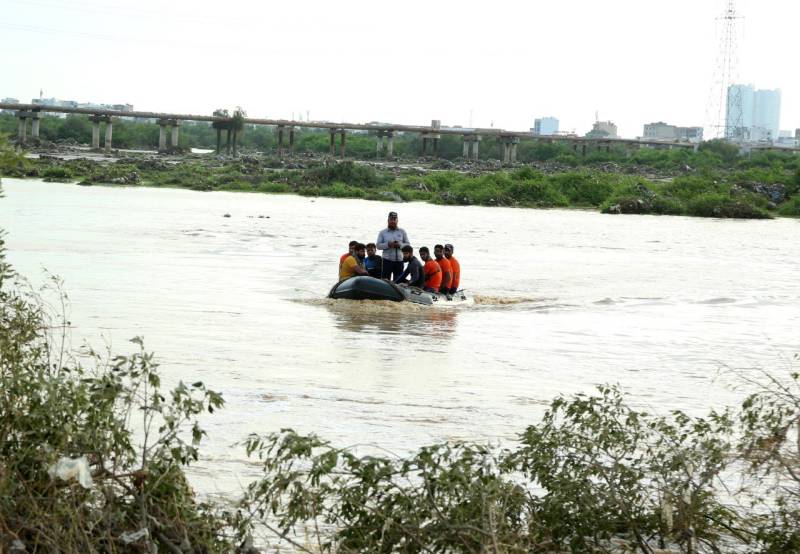 KARACHI - Pakistan's military said on Wednesday it was deploying helicopters in the country's southern port city of Karachi to pluck 200 families to safety after torrential monsoon rains and an overflowing canal flooded the city.

Floodwaters forced scores of people to evacuate their homes and head for safer areas, disrupting normal life, officials have said.

Policemen being saved by people during heavy rain in Karachi @titojourno

Rescuers could not use boats to reach these stranded families because of the fast-flowing floodwaters in the city's low-lying neighbourhoods - instead the military said it would fly in helicopters when the weather was clear.

Although rains have lashed many parts of Pakistan, Karachi, located near the Arabian sea, was the hardest-hit city.

Streets were flooded with sewage water in Karachi, where drainage and sewage systems are outdated.

There was no immediate word on any fresh rain-related casualties, but 90 people have died from flooding across Pakistan since Sunday, the country's national disaster management agency said on Wednesday.

Rains are expected to continue this week in Karachi, where Prime Minister Imran Khan earlier this month sent troops to help local authorities in pumping out rainwater from inundated residential areas.

Every year, many cities in Pakistan struggle to cope with the annual monsoon deluge, drawing criticism about poor planning.

The monsoon season runs from July through September.