'I was the devil's advocate': Chaudhry Nisar speaks his heart out in much-anticipated presser 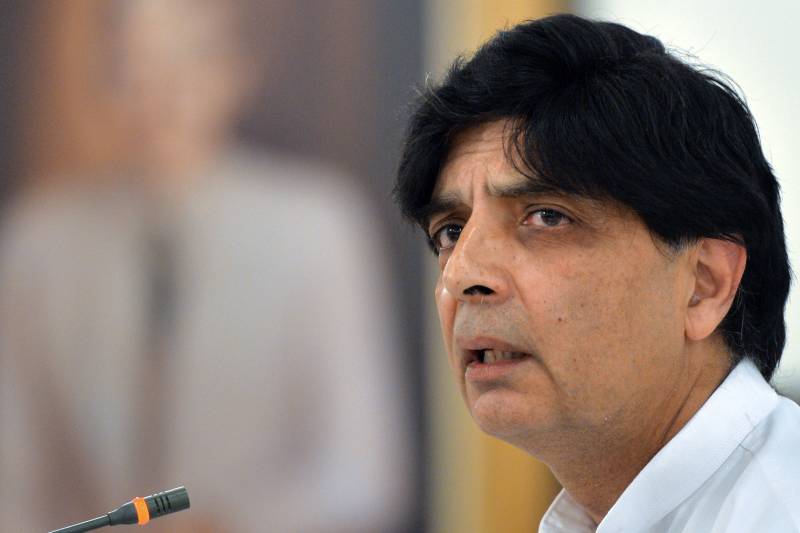 ISLAMABAD - Interior Minister Chaudhry Nisar Thursday announced he will resign from the ministry and quit politics on the day the Supreme Court announces its verdict on Panamagate case "be it for the party or against it."

The highly anticipated news conference Thursday came hours after Punjab Chief Minister Shahbaz Sharif met him in Islamabad, a second meeting between the two party leaders in less than 24 hours.

"Given the amount of speculation it generated, this press conference had become a big problem for me," he started.

"This is the most difficult press conference I've ever hosted," he said. "I'm sorry but I will not be able to take questions after this."

"I want to clarify a lot of things because of rumours. I want to talk about the situation vis-a-vis the Panamagate case," he said.

"People said I'd missed the train. I don't just get on any train," Nisar said during Thursday's press conference. "I've been a victim of internal intrigues."

Nisar went on to confirm that he had decided to step down from the party position a couple of days earlier. “I had decided exactly as was being speculated,” Nisar said. “It was supposed to be a very short press briefing wherein I would have made public a major decision.”

"All my life, I've spoken the truth to Nawaz Sharif. There's never been duplicity in my intentions. My role was the same as the whisperers who would tell Caesar: 'Caesar you're human'."

"It pains me to say this, but when the PML-N faced its most difficult challenge, there was a conspiracy to remove me from the consultative process."

The speculation of the minister’s resignation arose in the wake of the top court reserving its decision in the Panamagate case relating to Sharif family’s offshore wealth.

"I want to tell Nawaz Sharif — if I was with you, I would tell you that if you are absolved in the Supreme Court, 'keep your feet on the ground'. There will be those who will ask for heads to roll: I beseech you, you are a humble man. Do not fall for this."

"You are a well-loved man. This country and its people have given more to you than to anybody else. You have to behave with restraint, and you have to take the party forward. You need to ensure unity in the PML-N and you need to take it forward. Do not be angry; people will want you to be angry."

"There are dark clouds above us. The country is under severe threat. We are being surrounded. I know this and a few people in power know this. You do not need to protect only yourself — you need to protect the entire country. You need to pick up the pieces — whether you win or you lose," Nisar pleaded.

Speaking on civil-military relations, Nisar said he had "never compromised on civilian supremacy" even though he had strong ties to the military.

"Ask any general if I've ever sought to sacrifice civilian rule for my personal political gains," he said, in apparent reference to speculations and rumours that Nisar has always been 'the army's man'.

"I do whatever it takes to maintain civil-military relations for the sake of supremacy of civilian rule," he said. "Ask any military or intelligence leader if I've ever attempted to undermine the government for political gain."

On Wednesday, a high-level delegation of the Pakistan Muslim League-Nawaz (PML-N) met the estranged minister to get his proposed press conference cancelled.

“The truth is that he [Nisar] had a stance over some issues which he expressed in an internal meeting of the party [PML-N] after which he was excluded from the consultative process,” the spokesperson said in a statement on Wednesday.
The spokesperson further said the interior minister is seeking an explanation for his exclusion from the PML-N's meetings, and wants to know if the decision was made due to his opposing stance, or due to some other reason.