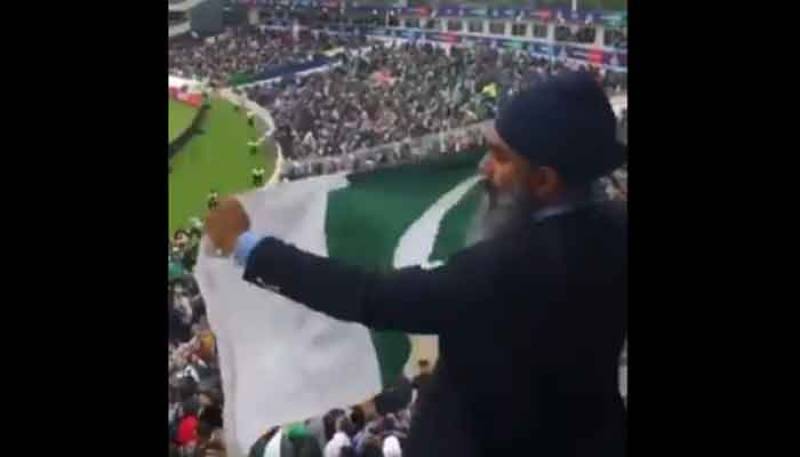 BIRMINGHAM - The Edgbaston Cricket Ground was painted green on Wednesday (June 26) and the 24,000-odd raucous Pakistan supporters got every bit of their penny's worth.

A sea of green supporters roared them on and local seismologists probably stared quizzically at their instruments, it came down to a masterful unbeaten 101 from Babar Azam who, along with a 76-ball 68 from Haris Sohail, chased down the target of 238 with five balls to spare.

During the Pakistan vs New Zealand match, a video of a Sikh supporter cheering for the green shirts circulated on the social media within no time.

LONDON - On Pakistan vs South Africa clash on Sunday (yesterday), an Indian fan caught the attention of Pakistan ...

The unnamed Sikh fan has won hearts of Pakistani supporters with his enthusiastic gesture during green-shirts' must-win match against New Zealand at the packed cricket stadium.

Let's go through some of the comments on the viral video of a Sikh enjoying the World CUP 2019's crucial match:

Good that people are moving on from the pains of partition

This implies That the Sikh is an Indian;he might be a Pakistani.

Pakistan's tremendous performance against the Kiwis at the ICC World Cup 2019 last night made the latter crumble unfathomably, fans all around have begun backing their favourite team to join the semifinals.