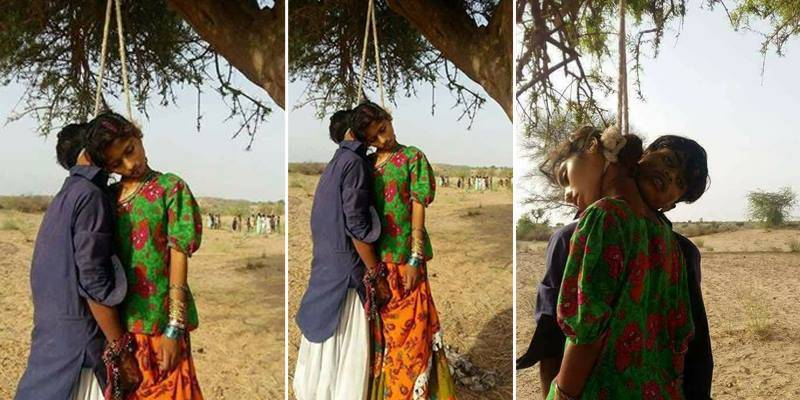 THAR - A young couple has allegedly committed suicide by hanging themselves on a tree in the Cholistan desert after they were not allowed by their families to marry, read a Facebook post.

The incident took place in a village Mataro Sand near Islam Kot, Cholistan.

The deceased, who have been identified as 18-year old Mina Kolhi and her boyfriend 20-year old Jivoy Kolhi, were said to be in a relationship and wanted to marry.

DIG Allah Rakhio Mirani has reportedly made a team to investigate the matter. When contacted local police, they denied to comment in this regard.

The Cholistan Desert, also locally known as Rohi, sprawls 30 km from Bahawalpur, Punjab, Pakistan and covers an area of 26,300 km. It adjoins the Thar Desert, extending over to Sindh and into India.

Earlier in February, a young woman and her alleged lover had committed suicide by jumping before a moving train within Sabzi Mandi Police limits in Gujranwala district of Punjab.

He was in love with his teacher, and killed himself using his father’s firearm over unrequited feelings, police said.

Last year, in August, a girl and boy in Sargodha killed themselves using poison, an investigation officer mentioned. Bodies of the couple, who wanted to get married, were found in a car.

Suicide in Pakistan has been a long-term social issue and is a common cause of unnatural death. Incidents of suicide are often reported in the press and newspapers throughout the country.

A research also indicated that the majority of subjects were under the age of 30 and that "domestic problems" are the main reason stated for suicide. These include unemployment, health issues, poverty, homelessness, family disputes, depression and a range of social pressures. Hanging, use of insecticides and firearms are the most common methods for carrying out suicide in the country.