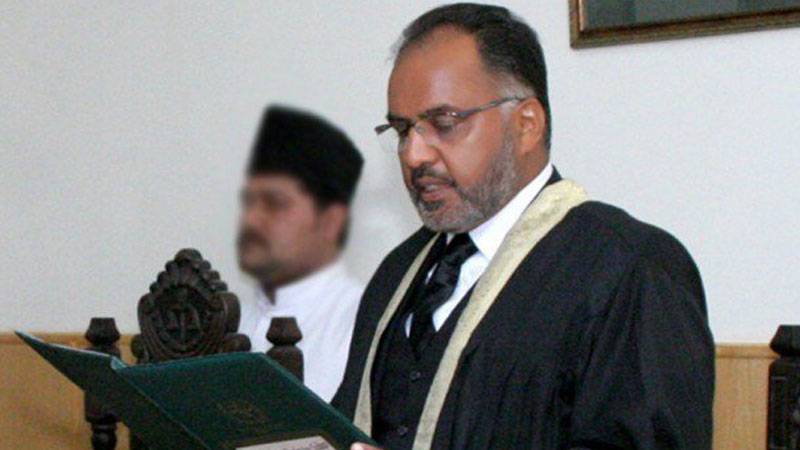 ISLAMABAD - Justice Shaukat Aziz Siddiqui of the Islamabad High Court expressed his displeasure over the deal brokered between the protesters staging a sit-in at the Faizabad interchange and federal government by a senior Pak Army officer.

Resuming the hearing of a case regarding the amendment in a clause of Election Act 2017, the judge grilled Interior Minister Ahsan Iqbal regarding the agreement signed with religious groups after summoning him on a 15-minutes notice.

'In what capacity, the Army Chief assumed the role of guarantor in the agreement' inquired Justice Siddiqui and pointed out that the Army chief instead of following the orders of the chief executive became a mediator.

'Where is their Radd-ul-Fasaad now? Did they not see any Fasaad (anarchy) in this protest?' Justice Siddiqui asked.

The judge remarked that this was proof of the 'military's involvement'.

'Who is the Army to adopt a mediator's role?' inquired the judge.

The Islamabad High Court judge went a mile more and observed that the Army officers who were fond of indulging in politics should relinquish their position and practically join politics.

Justice Shaukat Aziz Siddiqui questioned why the establishment was trying to play a heroic role in the current circumstances while referring to Major General Faiz Hameed who also signed the agreement as an arbitrator.

'The Pakistan Army should remain confined to its constitutional jurisdictions' remarked the court and stated that Major Hameed could not moderate the agreement as he rendered his services to the federation.

The IHC judge, while affirming his love for the Holy Prophet (PBUH), said that these remarks could cost him his life or add him to the list of missing persons.

During the hearing, Justice Siddiqui told Interior Minister Ahsan Iqbal that the administration has the right to call in the Army to control an emergency situation and that the military is bound to comply.

He also sought a detailed report from the interior ministry regarding the reasons for the failure of the operation.

Meanwhile, Interior Minister Ahsan Iqbal stated that there was a danger of civil war across the country and so the agreement was inked with the consent of national leadership.

To this, Justice Siddiqui remarked that the court had issued directions to vacate the place instead of signing a deal with the protesters.

'God willing, the sit-in would be called off shortly' he assured the bench and highlighted that security officials were being attacked every day and motorways, railways and cities were being closed.

'There was a conspiracy to show that a nuclear-state was failing. The agreement was reached with the protesters to bring the country out of those circumstances,' said Iqbal.

Earlier, the Deputy Attorney General Sohail Mahmood informed the court that the protesters and government had reached an agreement to end the sit in.

The court has ordered to form new inquiry committee under Barrister Zafarullah’s supervision to probe Khatm-e-Nabuwat matter and also directed to determine the name of responsible individuals regarding the controversial amendment in 10 days.