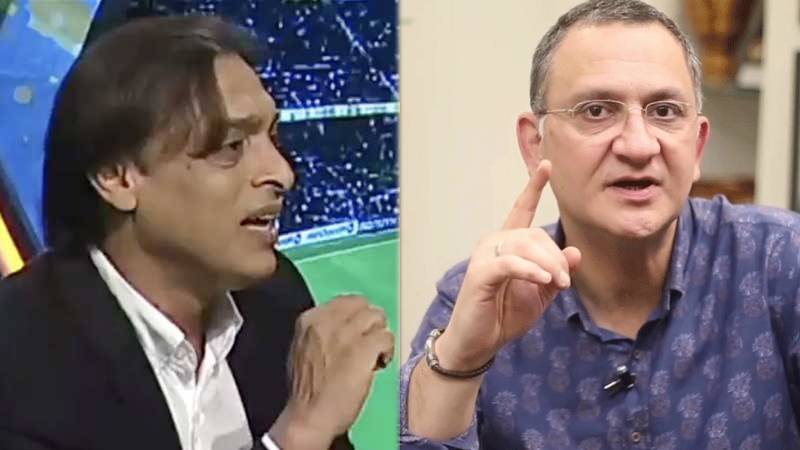 ISLAMABAD – Former Pakistani pacer Shoaib Akhtar walked out of a live cricket show on the state-run sports channel after host Dr Nauman Niaz, told him to ‘leave the show’ in wake of a ‘heated spat’.

'Rawalpindi Express', who was a part of analysts, announced to step down as a cricket analyst and walked off after famed cricket broadcaster, called him ‘rude’ and told him that ‘he is free to go if he wants to’.

In the viral clip of the state broadcaster special show, the former fast bowler said he had been insulted on live TV by the host in the special show following the Pakistan-New Zealand match in the T20 World Cup.

Full Clip of the Phadda between Dr Nauman Niaz and Shoaib Akhtar pic.twitter.com/jrpDaN6ms0

It all started when Akhtar decided to comment about Haris Rauf ignoring the line of questioning by the Nauman.

Irate Nauman then told Akhtar that he had been misbehaving with him and he would not tolerate that and in such circumstances, it was better if he left the show and then went for a commercial break.

Following the verbal spat between the two, Akhtar took off his microphone and left while Ijaz, who heads the PTV sports department, didn’t attempt to call him back and showed no reaction and carried on with the broadcast.

As the video of the unwanted situation on national TV went viral, social media users sympathize with him demanding an apology from Dr Numan Niaz.

Later, the pacer-turned analyst took to Twitter on Wednesday to clear the air.“Multiple clips are circulating on social media so I thought I shud clarify. dr noman was abnoxious and rude when he asked me to leave the show," he wrote in one of the tweets.

Multiple clips are circulating on social media so I thought I shud clarify. pic.twitter.com/ob8cnbvf90

Disgruntled Akhtar went on to say “It was embarrassing especially when u have legends like sir Vivian Richards and David Gower sitting on the set with some of my contemporaries and seniors and millions watching.

“I tried to save everyone from embarrassment by saying I was pulling dr nomans leg with this mutual understanding that dr noman will also politely apologise and we will move on with the show, which he refused to do. Then I had no other choice", he added.