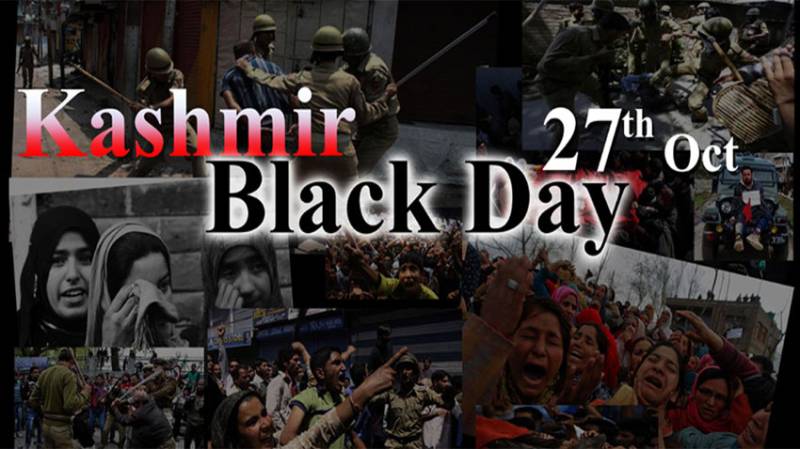 ISLAMABAD – Pakistanis and Kashmiris across the world are observing ‘Black Day’ today to register the protest against the illegal occupation of the territory by India on this day in 1947.

Each year, October 27 is observed as Kashmir Black Day as the day marks a grave human tragedy in the Indian Illegally occupied Jammu and Kashmir (IIOJK) when Indian forces rushed Srinagar to occupy, subjugate, oppress, and terrorise the Kashmiris.

A number of activities including rallies and seminars were held to express unwavering support and complete solidarity with the people of Indian occupied Jammu and Kashmir who are facing the worst-ever human rights violations.

In his message on Black day, Prime Minister Imran Khan reaffirmed Pakistan’s continued support to Kashmiris in their just struggle for the right to self-determination.

The premier said, “I reassure my Kashmiri brothers and sisters that Pakistan will continue to provide all possible support and stand shoulder to shoulder with them till the realization of their legitimate and inalienable right to self-determination.”

Pakistan and millions of Kashmiris observe the Kashmir Black Day every 27 October to condemn the beginning of the illegal occupation of parts of the State of Jammu and Kashmir by India.@ImranKhanPTI
1/5 pic.twitter.com/SVvwxZgkDU

Khan also urged the world leaders to play its role in pressing India to stop forthwith its human rights violations in IOK, and let the Kashmiris decide their own future in accordance with the UNSC resolutions.

Referring to the Kashmir Black Day, PM said it was also a day to commemorate the countless sacrifices Kashmiris had made and continue to make as they resist inhuman occupation and subjugation by India against their will.

PM said, "Today’s India is ruled by the RSS ideology whose extremist worldview has no place for Muslims or other minorities. India, on August 5, 2019, took unilateral and illegal action and for the last 815 days, has put Kashmiris under military siege while resorting to a media blackout and other restrictions”.

Meanwhile, President Dr Arif Alvi led a rally taken out on the constitution avenue in the federal capital today to express solidarity with the oppressed Kashmiri people.

Alvi while addressing the rally urged the Indian government to stop its persecution campaign in illegally occupied Jammu and Kashmir and give the right of self-determination to the Kashmiri people.

He categorically stated that BJP led government would not be allowed to change the demographic structure of the disputed territory. He said Kashmir will get independence and become part of Pakistan.