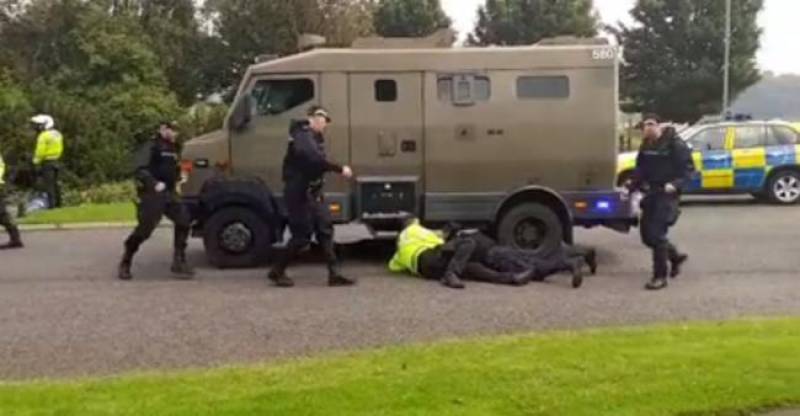 According to the details, large military convoys transport Trident nuclear warheads about six times a year between the Royal Naval Armaments Depot at Coulport on Loch Long and the bomb factory at Burghfield in Berkshire. They often pass through or near Glasgow.

The most recent convoy was stopped by protestors near Stirling on 15 September. It was delayed by 20 minutes after a 78-year-old anti-nuclear activist, Brian Quail, wriggled under the wheels of a convoy vehicle. The incident happened on the A84, at the junction of Back O’ Hill Road and Millennium Way, Raploch, around 5pm and lasted around 20 minutes, causing some disruption to commuters.

The protestor wanted to register protest against the skyrocketing duel for nukes.

Moreover, according to a new analysis, a road accident or a plane hitting the convoy could contaminate a large swathe of the city and put hundreds of thousands of people at risk.

In case of any unfortunate accident, Radioactive plutonium and uranium could leak from nuclear warheads and be blown up to 17 kilometers across East Dunbartonshire, according to the analysis.

“A serious convoy accident in Glasgow is a horrific prospect and an unacceptable and reckless approach to risk,” she told the Sunday Herald.

“A cloud of radioactive contamination could spread across the city and out into East Dunbartonshire without the permission or knowledge of those affected” she added.

On the other hand, an expert in nuclear security, Dr Robert Downes, told BuzzFeed News the risk of the kind of accident Thompson is fearful of is so small that it’s “hardly worth considering” and that only the “extremely unlikely” event of an aircraft crashing into a convoy could potentially set off a warhead.