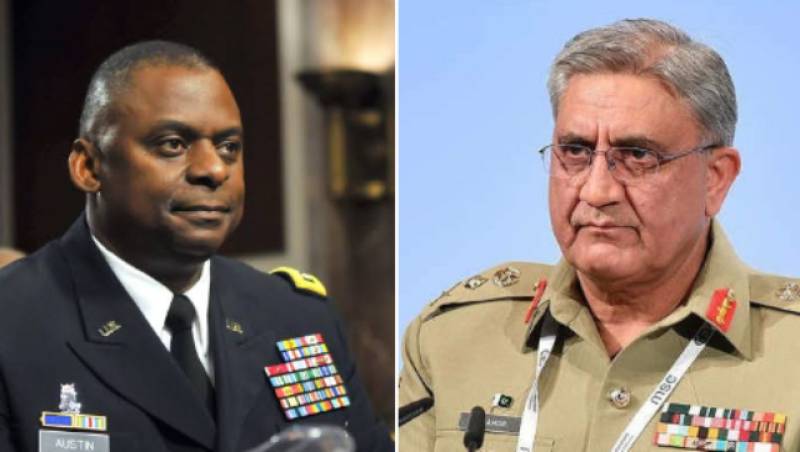 WASHINGTON/RAWALPINDI – US Secretary of Defense Lloyd Austin made a telephonic contact with Pakistan's Chief of Army Staff General Qamar Javed Bajwa  on Wednesday to discuss the drawdown of US activity in neighboring Afghanistan, a Pentagon press release said.

"During the call, Secretary Austin reaffirmed the importance of the US-Pakistan bilateral relationship and expressed appreciation for Pakistan's support for Afghanistan Peace Negotiations. Secretary Austin and General Bajwa also discussed the drawdown in Afghanistan," the release read.

The Pentagon on Friday announced that Defense Secretary Lloyd Austin had ordered the USS Dwight D. Eisenhower aircraft carrier to remain in the region for "a period of time." Long-range bombers are also headed to the region, and two US Air Force B-52s are already in place.

US President Joe Biden announced earlier this month the decision to withdraw troops from the country starting on that May 1 deadline, with the aim of completely withdrawing from Afghanistan by September 11, which would mark the 20th anniversary of the 9/11 terrorist attacks that sparked the war in Afghanistan the longest conflict in American history.

US allies, who have another 7,000 or so troops in Afghanistan under the auspices of NATO, are also leaving, along with thousands of contractors, under the same timeline.