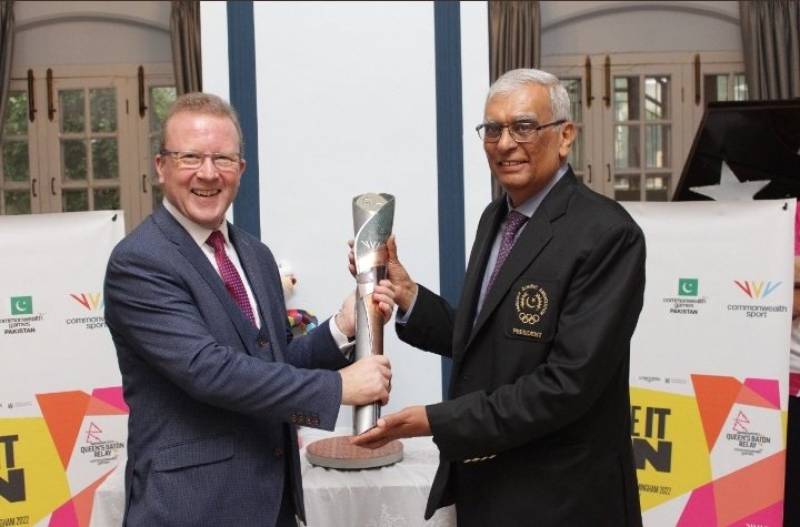 ISLAMABAD – The 16th Queen’s Baton arrived in Pakistan’s largest city as part of its journey for the Birmingham 2022 Commonwealth Games.

Deputy British High Commission in Karachi hosted a welcome ceremony to hand over the Queen’s Baton to the President of the Commonwealth Games Association Pakistan Lt Gen (retd) Arif Hasan.

The Baton Relay has been an essential part of the Commonwealth Games for over 6 decades and celebrates communities from across the Commonwealth during the run-up to the Games while this year’s Games will start on July 28.

The Queen’s Baton arrived in the South Asian country as the symbolic relay continues its global journey ahead of the Commonwealth Games opening ceremony next year.

The Baton will be taken to Madressatul Islam University, Mazaar-e-Quaid, Karachi Grammar School and Moulana Muhammad Ali Johar Park as Baton bearers, athletes, and others share untold stories of striving for change in their communities.”

Its most successful event has been wrestling, where it managed to get 42 medals – 21 of which have been Gold. It ranks third overall in Wrestling at the Commonwealth Games.

The Queen’s Baton Relay is an epic journey covering the entirety of the Commonwealth as it will travel to all 72 nations and territories, covering a distance of around 140,000 kilometers.

For 269 days, the Baton will travel to Europe, Africa, Asia, Oceania, the Caribbean, and the Americas, before it embarks on the final stretch of its journey across England for 25 days. It is set to leave for the Maldives after Pakistan.