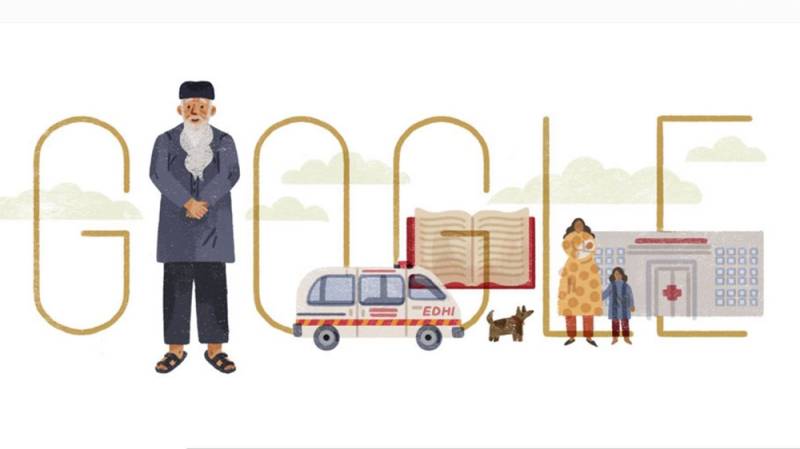 Google paid a tribute to Abdul Sattar Edhi on Monday with its Doodle honours portraying him with an ambulance, a mother with two kids, a hospital, a dog and a book.

The Google Doodle will appear in the UK and some other European countries, as well as Pakistan, the US, Singapore, Japan, South Korea, Australia and New Zealand.

According to The Telegraph, some confusion persists over his actual birth date (Edhi himself was unsure and believed he was born between 1926 and 1928). However, Google has chosen honour him with a doodle on February 28th.

Abdul Sattar Edhi, who founded the world's largest volunteer ambulance network, would have been 89 years old on Tuesday.

Who was Abdul Sattar Edhi?

To those in Pakistan, Abdul Sattar Edhi needs no introduction.

Known in Pakistan as "Angel of Mercy" and "Pakistan's Father Teresa" for his social work that also won international acclaim, Edhi established a welfare foundation almost six decades ago that he oversaw together with his wife, Bilquis Edhi.

Edhi was born in a small village of Bantva in the Gujarat district of then British-ruled India but moved to Karachi shortly after Pakistan was formed.

Edhi noticed that many Pakistanis lacked medicine, education, and other essentials, and he made it his life's mission to help others. In 1951, he established the Edhi Foundation, which is funded solely by private donations.

By the time of his death, Edhi was registered as a parent or guardian of nearly 20,000 orphaned children.

Abdul Sattar Edhi passed away after protracted renal failure on July 8th, 2016 in Karachi. He was laid to rest at the Edhi Village Karachi.

Even death did not prevent him from serving humanity: His last wishes included the request that his organs were to be donated but due to his ill health, only his corneas were suitable.

What is the Edhi Foundation?

The Edhi Foundation is currently the largest welfare organisation in Pakistan. Since its inception, it has rescued more than 20,000 abandoned babies, rehabilitated some 50,000 orphans and has trained more than 40,000 nurses.

In addition to humanitarian services, the Edhi Foundation also operates an animal shelter, with 24/7 veterinarians on board.

Despite the vast sums of money that passed through his foundation, Edhi lived modestly with his family in a two-room apartment adjacent to the headquarters of his foundation.

Known in public as Maulana Edhi, he supported and promoted working opportunities for women. Out of the 2,000 paid workers of his Edhi Foundation, around 500 are women.

A Muslim by birth, Edhi said in 2009 that he had “never been a very religious person”. When asked why he helped people of all creeds, casts and religions he replied: “Because my ambulance is more Muslim than you.”

About the Google Doodle

The Google Doodle has become a regular event, in which the search engine changes the logo on its homepage to celebrate holidays and the anniversaries of famous people and events.