Ignoring Pakistan is dangerous for US: John McCain 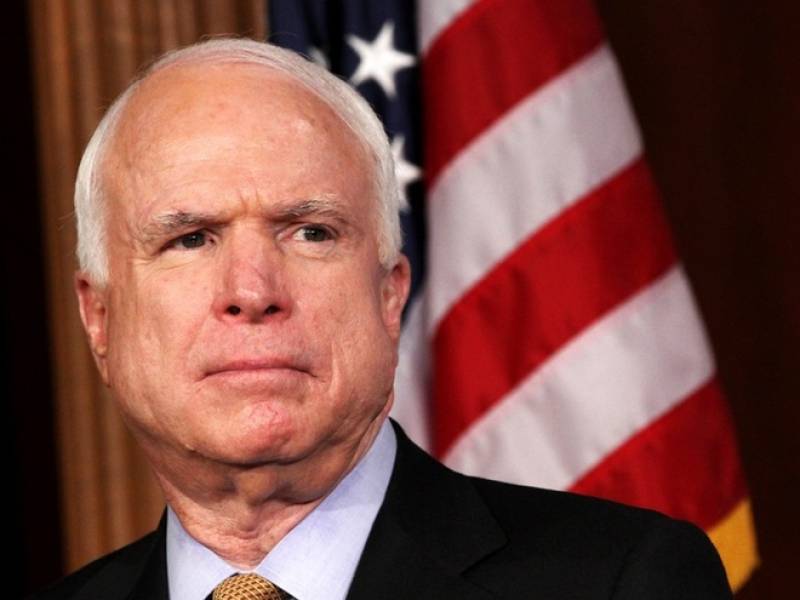 WASHINGTON - The Chairman of the United States Senate Committee on Armed Services, John McCain, has urged the leaders of United States, Pakistan and Afghanistan to overcome their differences and give more attention to the war against terrorists.

In an opinion piece published in The Financial Times on Tuesday, Senator McCain argued that without Pakistan’s cooperation, the US mission in Afghanistan would become “immeasurably more difficult”.

“The sooner the US, Pakistan and Afghanistan get down to the business of fighting their common terrorist enemies together, no matter where they hide, the better off the nations, the region and the world will be,” he wrote.

McCain visited the Pak-Afghan region in the first week of July. In Pakistan, he met civilian and military leaders and discussed counter-terrorism efforts with them.

He wrote that the visit had convinced him that the US mission in Afghanistan was faced with the same objective as it was in 2001: to disrupt and defeat terrorist networks. He also realized that enhanced cooperation between Afghanistan and Pakistan was essential for defeating these terrorists.

He maintained that the strategic imperative for improved relations between the US and Pakistan was clear: the safety of American troops and the success of their mission in Afghanistan. It was also important for the stability of the region and for the national security of both Pakistan and the US.

The senator noted that limitations on US assistance to Pakistan and congressional reluctance to approve subsidies for the sale of defense articles had added to existing tensions between the two governments.

“Despite this and other recent difficulties, the US and Pakistani leaders cannot allow ambivalence and suspicion to fester. Common interests in counterterrorism, nuclear security and regional stability are too important and too urgent,” he wrote.

Senator McCain acknowledged that for too long, the US has viewed its bilateral relationship with Afghanistan only through the prism of Afghanistan. “To achieve real progress, the US must make clear its enduring commitment to Pakistan’s stability and economic growth,” he said.

He also urged Pakistan to “take on and eliminate havens for terrorist groups such as the Afghan Taliban, the Haqqani network, Lashkar-e-Taiba and Jaish-i-Mohammad that operate within its borders, attack its neighbours and kill US forces.”

“This will be difficult for Pakistan. It will require political will and entail costly sacrifice in blood and treasure. That is why there will be sceptics in the country opposed to decisive efforts to defeat extremism,” he noted.

Senator McCain emphasized that now Pakistan had the opportunity to “prove the sceptics wrong again” by taking on terrorist groups that targeted Afghan, Indian and US forces in the region with the same energy with which it had pursued the fight against the Pakistani Taliban.

“By taking on all terrorist groups operating in its territory, Pakistan will find that the US remains willing and able to assist in this fight and develop an enduring strategic partnership,” he concluded.