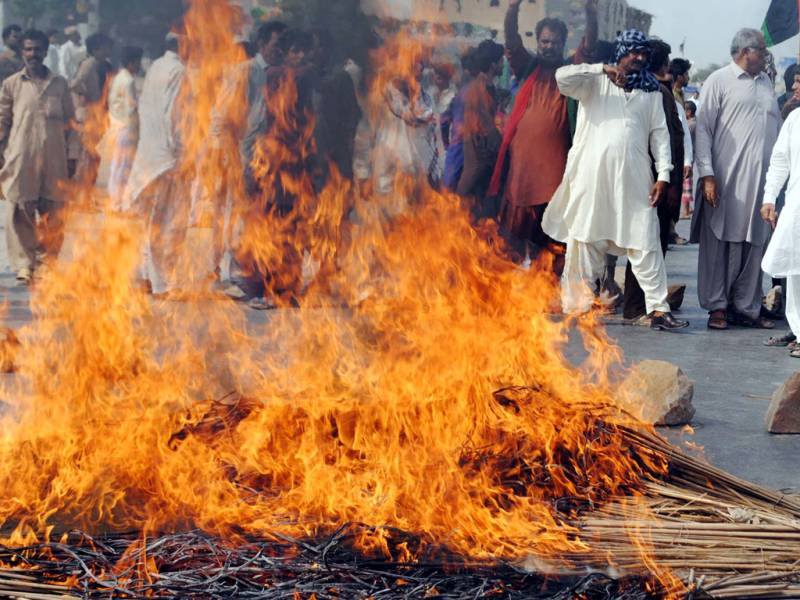 LAHORE – A small number of PML-N workers, disappointed by the final verdict of Supreme Court of Pakistan, have been staging protest against PM Nawaz's disqualification.

According to local media reports, angry workers of Pakistan Muslim League-Nawaz (PML-N) set tires on fire and blocked the road in front of Data Darbar in Lahore. They raised slogans in support of Nawaz Sharif. Their slogans said, ‘The disqualification ruling is unacceptable’.

Moreover, Pakistan Muslim League-Nawaz workers protested and confronted their counterparts from rival political parties in different cities of the country, specifically in Punjab on Friday.

Clashes and protests began before and after the Supreme Court’s verdict disqualifying Nawaz Sharif.

In Lahore, PML-N and Pakistan Peoples Party workers came face-to-face in front of the press club.

The PPP workers were chanting slogans against Nawaz, while those from PML-N were shouting statements in favour of their party chief.

Later, after the Supreme Court disqualified Nawaz Sharif, workers of both the parties hurled harsh statements at each other.

While expressing their excitement over Nawaz’s disqualification, PPP workers were seen dancing outside the press club.

In Gujranwala, PML-N workers took to the streets against the apex court’s decision. When police tried to stop them, harsh words were exchanged between law-enforcers and PML-N workers. Some party workers also burnt tyres on Jinnah Road, blocking the route for traffic.

In Islamabad, PML-N workers confronted those from Pakistan Tehreek-e-Insaf outside the Supreme Court. There too workers chanted slogans against each other’s parties.

As more workers of PML-N reached the site to counter the celebrations, measures were taken to avoid any untoward incident – heavy contingents of police were called and barbed wires were set up. At the gathering, a woman from PML-N fell unconscious while shouting slogans.

After the verdict, Information Minister for State Maryam Aurangzeb said, “We are examining the judgment and will announce our future course of action later in the day. The SC judgment has saddened me. Prime Minister has repeatedly been asking what are the charges against him,” she told media persons outside the court.

SC has disqualified Prime Minister Nawaz Sharif for life. The bench also recommended cases to be opened against Captain Muhammad Safdar, Maryam, Hassan and Hussain Nawaz ordering the National Accountability Bureau to wrap up the cases within six months.