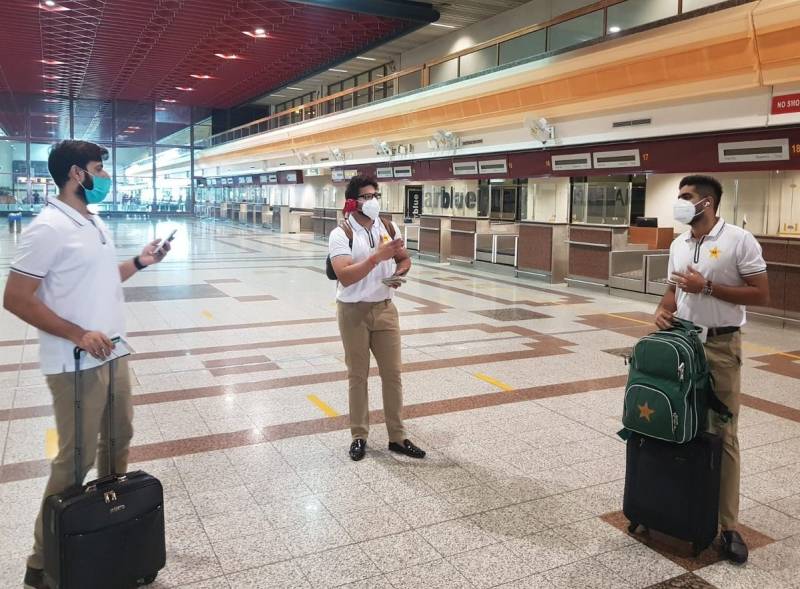 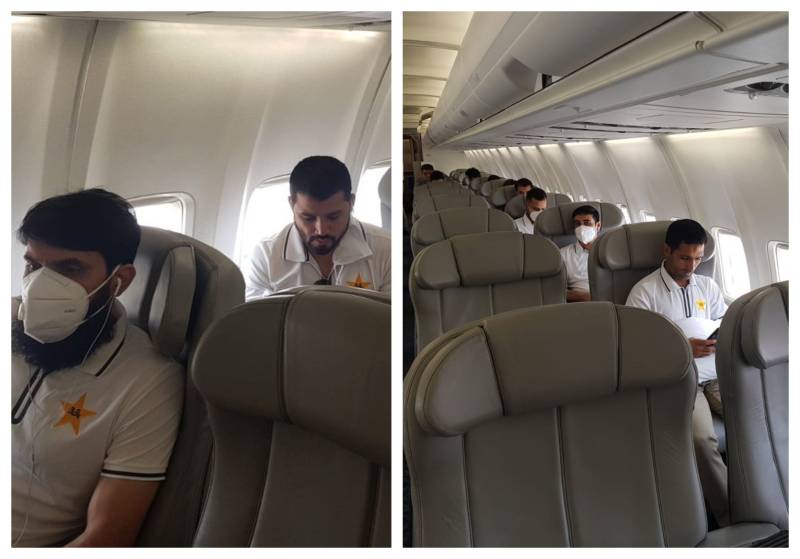 LAHORE – Twenty players and 11 player support personnel departed on a chartered flight to Manchester on Sunday morning for a three-Test and three T20I series to be played in August and September, according to the Pakistan Cricket Board (PCB).

Upon arrival in Manchester, the squad will be transported to Worcestershire where they will undergo the England and Wales Cricket Board testing before completing their 14-day isolation period, during which they will be allowed to train and practice. The side will move to Derbyshire on 13 July.

In a positive news, all 18 players and 11 player support personnel, who had tested negative for Covid-19 in the first round of tests on Monday, have again returned negative in Thursday’s retests.

Besides the 29 members, tests of fast bowler Musa Khan and Pakistan U19 captain and wicketkeeper Rohail Nazir, along with three other reserve players, were also conducted on Thursday and they have also returned negative.

As such, Musa and Rohail have been included in the first group of travellers, which is:

Cliffe Deacon and Waqar Younis will join the side directly from South Africa and Australia, respectively, while Shoaib Malik is expected to travel around 24 July.

Following advice from leading sports science experts and as per the UK government regulations, players who have tested positive during the PCB testing process will be unable to travel on Sunday.

However, they will be sent to England as soon as their two tests return negative.

Amongst the four reserves players, who were tested on Wednesday, only Imran Butt has tested positive, while the tests of Bilal Asif, Mohammad Nawaz and Musa Khan were negative.

Out of the 10 players and one official, who had earlier tested positive during the PCB testing programme, six players have tested negative in the retests. They are: Fakhar Zaman, Mohammad Hasnain, Mohammad Hafeez, Mohammad Rizwan, Shadab Khan and Wahab Riaz.

The six players who have now tested negative will undergo third round of testing at some stage next week and if their tests remain negative, then the PCB will make arrangements to send them to England.

The five players and the masseur, who have are positive, have been advised by the PCB medical panel to observe strict quarantine to protect their families and friends from the contagion. As in the past, the PCB medical panel will provide them complete support and continue to monitor their progress. These players will undergo tests following the completion of the quarantine period and will be sent to England following two negative tests.

PCB Chief Executive Wasim Khan: “This was a challenging and unprecedented process that we have conducted and I am pleased that following a second round of testing, we are able to confirm 20 players and 11 player support personnel will travel to Manchester on Sunday.

“Due to the increasing number of national cases and availability of testing labs in some players’ hometowns, I think the PCB medical panel have done a good job to get us through this process. Based on the national spread of players, there were always going to be some logistical challenges; we have taken a number of learnings from the process that we will take forward with us.

“With the Test series being played first in August, Misbah is satisfied with the group of players that are traveling on Sunday as the focus will be on red-ball preparation. Misbah understands that flexibility and adaptability will be needed with his training and practice schedule while operating under various guidelines.’

“I want to reassure the players and the official left behind that the PCB will provide them best support and look after them during the quarantine period. It needs to be remembered that these players were asymptomatic, which means their chances of regaining complete fitness are higher and brighter than most. As soon as these players test negative twice through the PCB testing process they will be flown to England to join the squad.

“Lastly, on behalf of the PCB, I want to once again urge the Pakistan cricket fans and followers to support the government in their fight against coronavirus by strictly following its instructions. Only through taking personal responsibility can we begin to eradicate this virus.”