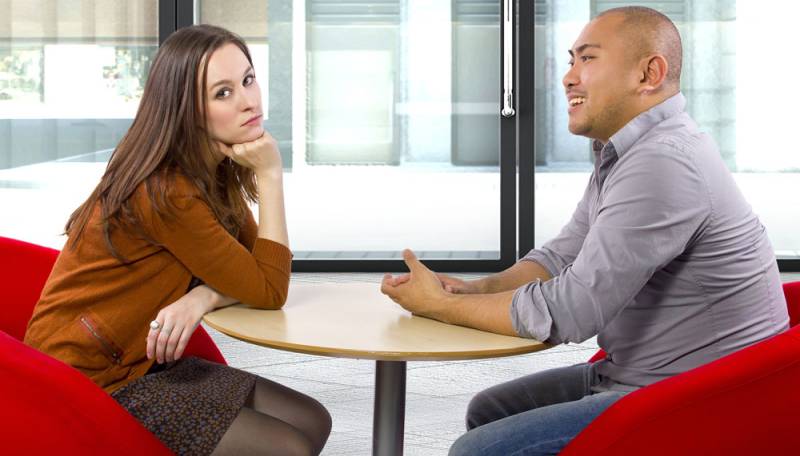 One of the toughest challenges of being in a relationship is being nice to other women, women who are NOT your girlfriend [:)], all the while maintaining a tone that is not suggestive or could be mistaken for something that it's not. Nope, we don't want that to happen. Nope, nope, nope.

The following are some of the very common things a man in a relationship might say to another woman, who is NOT his girlfriend (Yeah, this'll keep happening), that might land him in hot water along with substitutions that he could say instead to make his intentions kind, clear, platonic, non-sexual, non-physical, chaste...

What you should say instead: "You look great today, a bit like when the line at the cafeteria is short, or when the line is long but the food is kinda okayish. Hope you have an absolutely average day! :)

“You smell wonderful. Is that a new perfume?”

What you should say instead: "If I had to take the average of all the people's scents that I will smell today, and believe me I will, I would imagine you to be part of the upper quartile of the smelt scents."

“You look great in those jeans. Have you lost weight?”

What you should say instead: "WOW! The person who selected those jeans for you clearly knew what they were doing. Also, a huge shout-out to the designer of the product, the child labour that was involved in making them and Salman Khan for no reason whatsoever. Brilliant. And what's this? Have you been making decisions in relation to the food that enters your mouth, or have surrounded yourself with trick mirrors that make you look lesser in terms of weight than the last time I saw you?"

What you should say instead: "Ha ha ha, the words that just came out of your mouth brought towards me the mildest of amusements in the most nondescript manner possible!"

“Do you want to grab a coffee after uni?”

What you should have said: "Would you like to order a coffee from the same coffee shop that I too will be ordering a caffeinated drink while exchanging the most non-personal of small talks that couldn't possibly be taken for something else?"

“Are you seeing anyone?”

What you should say instead: The information regarding you being or not being in a relationship with someone is of no value to me and I shall leave you now to smite myself for even thinking about such an occurrence. I am sorry, and hope to never visit the section of my mind that brought me to such unforgivable thoughts.