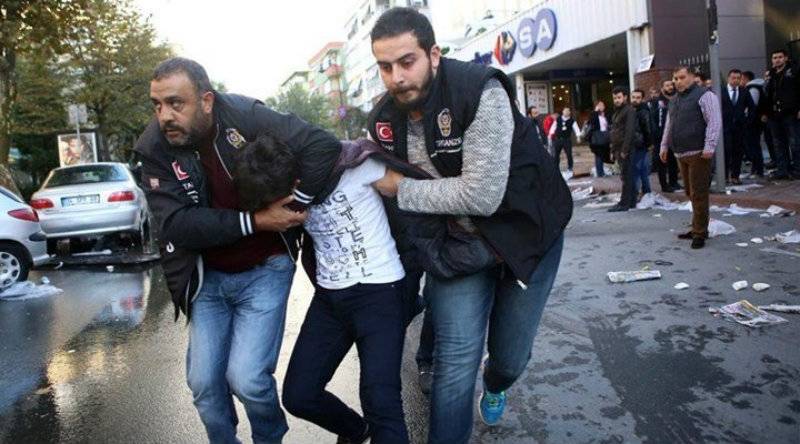 "Dear viewers, do not be surprised if you see police in our studio in upcoming minutes," anchor of Bugün TV, which is one of the seized media outlets, said as he narrated the drama unfolding outside the media company.

Hundreds of people, most of them journalists from media outlets affiliated with Koza-İpek Holding, thronged outside the headquarters of the company to protest the seizure of the media outlets.

Mahmut Tanal, a lawmaker with the Republican People's Party (CHP), tried to negotiate with police chiefs, but the riot police proceeded to enter into the building, where at least five media outlets are operating. 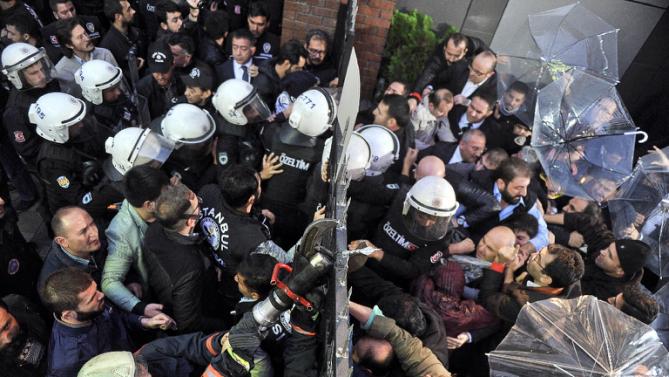 A reporter from the newspaper tweeted his bloody hands to show how he was injured while resisting to police occupying his office.

Another editor, Fatih Akalan, cried at police outside the building in futile attempts to protest the takeover. A number of reporters just stood outside, with teary eyes, watching a newspaper or a TV channel they worked for years, being taken over by the riot police.

"Look," another anchor outside the building said, pointing to destroyed gates of the company. "This is the entrance of my office. But now occupied by police."

The takeover of Koza Ipek comes just days before Turkey is set to vote in general elections after the ruling AK party of president Recep Tayyip Erdogan failed to form a coalition government.

Turkish authorities appointed several trustees to replace the management of İpek-Koza Holding business, which houses media outlets including Bugün TV, the flagship station that has emerged as a main platform for opposition politicians over recent months.

The takeover of the management of Koza İpek Holding's 22 companies, including critical TV stations Bugün TV, Kanaltürk and two newspapers, comes just days before Turkey is set to have a repeat parliamentary election on Nov. 1. The move has intensified concerns about the deteriorating state of freedom of speech and of the media in Turkey.

The police tried to clear the way for several trustees to enter into the building, who were appointed by Turkish authorities to take over the company. 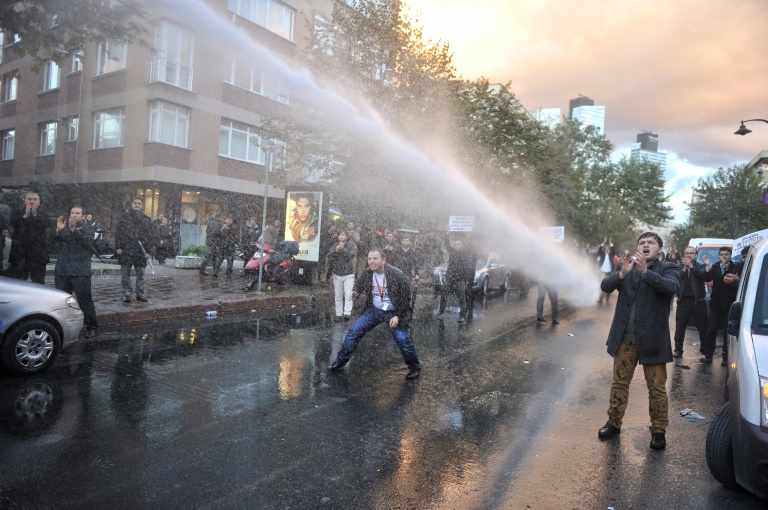 Only four days left to key parliamentary elections and Bugün TV was supposed to be a major tribune reporting about the elections and candidates.

The brawls and hostile takeover were broadcast live on TV, sending chills across the country and raising concerns if the unusual scenes for democratic countries are set to become a new normal in this country seeking a membership with the European Union.

Erdogan, whose party lost its 13-year majority in June, called snap elections and intensified violence with the Kurds in an attempt to regain unilateral majority by appealing to nationalist sentiment.

On 26 October, an Ankara court ordered Koza Ipek Holding to be placed under the management of a trustee pending an investigation into its financial links to the Hizmet (Service) movement of Fethullah Gulen, an influential cleric who is in self-imposed exile in Pennsylvania, US.

Last year, Gulen and his movement were accused of orchestrating a wave of high-profile arrests that shook the moderate-Islamist government of the then-prime minister and current president Recep Tayyip Erdogan.

Forty-seven businessmen and politicians, including the sons of three Cabinet ministers, were put in custody on corruption and bribery charges. The 70-year-old preacher, who is accused of "leading a terrorist organisation", denied any involvement. 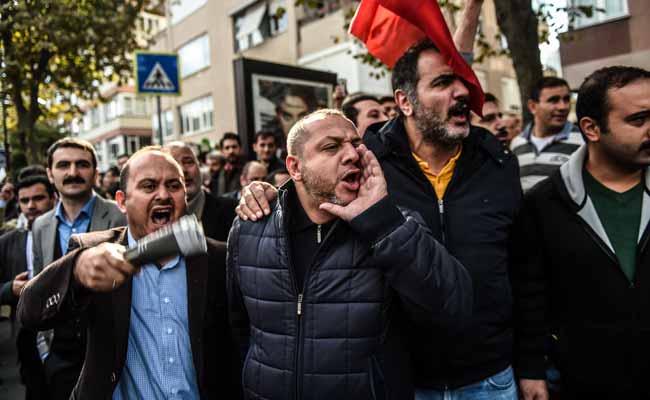 Erdogan accused Gulen of orchestrating the scandal against his inner circle in an attempted "judicial coup" and of building a "parallel state" with extensive influence in the Turkish police and judiciary. Reports that Hizmet members infiltrated the secret services, law enforcement offices, and the AK party itself have circled in Turkish media for some time.

The remaining media outlets that are critical and independent of the government line are also under the risk of unlawful seizure. Just like Koza İpek, the Doğan and Feza media groups are facing anti-terror probes through government-backed judicial investigations.

Many in Turkey are concerned that the government crackdown on critical and independent media has reached such a point that takeovers will soon engulf other media groups.

Turkish Bar Association (TBB) Chairman Metin Feyzioğlu defined the takeover of Koza İpek Holding management as “the seizure of media outlets that are critical of government by the palace,” referring to President Recep Tayyip Erdoğan, on Twitter. 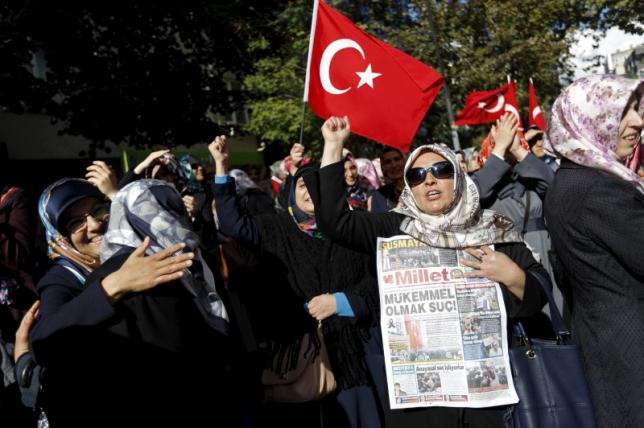 Main opposition Republican Peoples' Party (CHP) leader Kemal Kılıçdaroğlu has called on Koza İpek Holding CEO Akın İpek to show solidarity with him in the face of what he called the unlawful decision to seize his companies. He earlier called for the abolition of the criminal courts of peace, which he said were a tool in the hands of the AK party government to punish critics and opponents.

The US Embassy in Ankara has also joined the growing chorus of those expressing concern over the takeover of Koza İpek Holding's companies. “The US believes strongly that freedom of press/expression are universal rights. … When there is a reduction in the range of viewpoints available to citizens, especially before an election, it is a matter of concern,” the embassy wrote on its Twitter account.

Prominent journalists, columnists, editors-in-chief and press freedom advocacy groups have also raised their concerns over the government-backed court decision to seize Koza İpek Holding and visited its media offices in İstanbul and Ankara on Tuesday in solidarity with the journalists in the group.