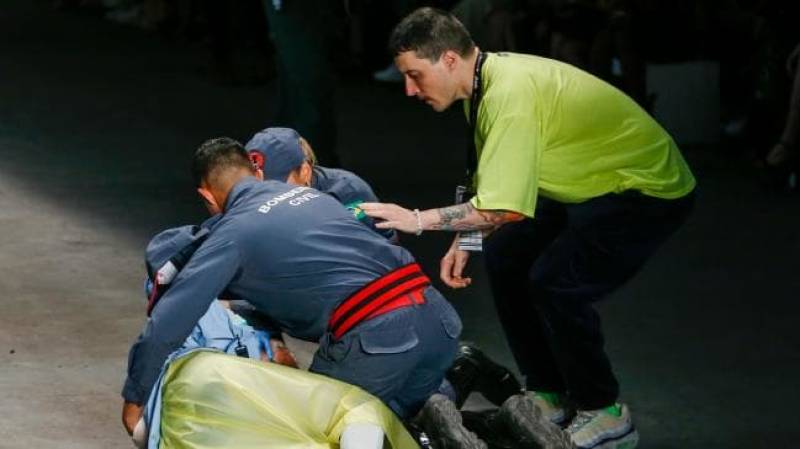 SAO PAULO - A 26-year-old Brazilian model has collapsed on the catwalk in front of horrified onlookers and died after he reportedly tripped on the straps of his sandals.

Tales Soares stumbled while turning at the end of the stage during his performance at Sao Paulo Fashion Week in Brazil on Saturday night.

The audience had thought Soares' collapse was part of the show until emergency workers rushed onto the stage as he began foaming at the mouth.

They were unable to revive him and he was later pronounced dead at a hospital in Sao Paulo; the exact cause of his death remains unclear.

The show went on despite Mr Soares' death, with models brandishing hand-written placards on the catwalk with messages of tribute to the popular model, such as "Luto" (mourning) and "Amor" (love).

Soares, also known as Tales Cotta, was employed by prestigious Brazilian modelling agency Base MGT which over the weekend issued a statement denying that drugs played any role in the 26-year-old's demise.

"We emphasize that the model always had exemplary behaviour. He was not a newcomer, he has already paraded in other editions of both SPFW and other important fashion events," a Base MGT spokesman said.

"Tales never presented or complained about health problems. He had a healthy diet (he was a vegetarian), did not use illegal substances and was in full condition to participate in the parade. And we ask for respect at this moment of deep sadness."

Brazilian news websites have been rife with speculation as to what might have caused the young model to collapse.

One outlet alleges that vegetarian food was unavailable at Saturday night's event and that Soares had therefore not eaten for a long time.

However, Sao Paulo Fashion Week organisers deny this and say that catering was available throughout the evening. It was also speculated that Soares tripped over one of the straps on his sandals, causing him to fall over, but the cause of death will not be confirmed until investigators carry out a post-mortem examination.

Faelo Ribeiro, a friend of the model, said he died doing what he loved.  "He has always been very engaged in social causes. He fought for the minorities and taught in a needy community," he added.

Sao Paulo Fashion Week has paid tribute to Soares in a post on its Instagram page, which reads:  "May God welcome you with open arms! Life is definitely a catwalk, we're just passing through! Very sad!"