TLP marches on Islamabad with demand to cut Dutch ties 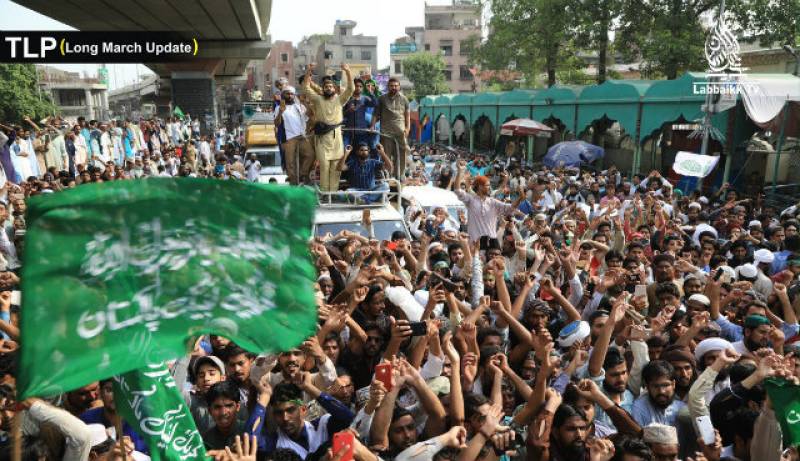 LAHORE - Thousands of Tehreek-i-Labbaik Pakistan (TLP) supporters have started marching towards the Pakistan’s capital city to stage a massive demonstration against a competition of blasphemous caricatures, depicting Holy Prophet Muhammad (PBUH), in the Netherlands.

Khadim Hussain Rizvi of Tehreek-i-Labbaik Pakistan (TLP), a religio-political party that backs strict blasphemy laws, is leading the march which made its way out of Lahore via Grand Truck Road. Hundreds of activists gathered at Data Darbar on Wednesday for the demonstration organised by the ultra-conservative party that amassed the fifth largest number of votes in a general election last month.

The 51-year-old cleric has announced that TLP workers would "stay on the streets until either the publication of blasphemous cartoons in the Netherlands is stopped or the government immediately ends diplomatic ties with the Dutch".

The demand for the envoy's expulsion was made during the first round of talks between TLP's top leadership and the government in Lahore.

Most Muslims believe in a total prohibition of visual representation of the prophet, regardless of whether they are positive or negative in nature.

Earlier, the Pakistan Tehreek-i-Insaf (PTI) government was urged to not only "discontinue diplomatic and commercial relations with the Netherlands" but also "demand from other Islamic countries to do the same".

The TLP had also demanded that since the said competition's judge is an American national, "therefore, strict measures should also be taken against the US".

The blasphemous cartoon contest, scheduled for November, is being organised in the Netherlands by Dutch Freedom Party leader Geert Wilders — a right-wing anti-Islam lawmaker who has been widely criticised for his far-right activities. The contest is to be judged by American cartoonist and former Muslim Bosch Fawstin, who won a similar contest in the US in 2015.

Dutch Prime Minister Mark Rutte has distanced his government from the controversial contest, clarifying that: "Wilders is not a member of the [Dutch] government. The competition is not a government initiative."

In a tweet on Wednesday, Foreign Office Spokesperson Dr Mohammad Faisal said that Foreign Minister Shah Mahmood Qureshi spoke with his Dutch counterpart to discuss the issue of "blasphemous caricatures".

FM spoke with the Dutch FM on phone to discuss the issue of blasphemous https://t.co/NpOFK4smmL expressed concern on the announcement of abominable and sacrilegious competition by Greet Wilders.The Dutch FM said that hisgovernment was neither associated nor supporting the event

"The FM expressed concern on the announcement of [the] abominable and sacrilegious competition by Geert Wilders," read the tweet, adding that the Dutch FM made it clear that his government was neither associated nor supporting the event.

Earlier, Foreign Minister Shah Mehmood Qureshi said he planned to take up the issue with the United Nations and several world leaders.

The Organisation of Islamic Cooperation (OIC) in July condemned the planned competition.

On Tuesday, Prime Minister Imran Khan said, "They don't understand how much they hurt us when they do such acts," a day after the upper house of parliament condemned the proposed cartoon competition.

TLP, a political faction of Tehreek-e-Labbaik Ya Rasool Allah (TLYRA), had attained notoriety after it effectively paralysed life in Islamabad for 20 days in November 2017 over a change in wording to an electoral law, changing a religious oath to a simple declaration. TLP said the change amounted to blasphemy.

Protesters had occupied the Faizabad Interchange which connects Rawalpindi and Islamabad through the Islamabad Expressway and Murree Road, both of which are the busiest roads in the twin cities.

The then governing Pakistan Muslim League-Nawaz party (PMLN) was forced to accept the resignation of law minister Zahid Hamid, whom TLP held responsible for the change, after seven people were killed and nearly 200 wounded in a failed attempt by police to disperse protesters.

TLP founder, Khadim Rizvi who has been confined to a wheelchair after an accident in 2006, earlier continued to raise his voice for the release of Mumtaz Qadri – the elite police commando who gunned down former Punjab Governor Salmaan Taseer in Islamabad’s uptown market in January 2011.

Qadri was hanged after being found guilty of Taseer’s murder. Since then, his grave has turned into a shrine for those who agree with his position on Pakistan’s blasphemy laws.

A staunch follower of Imam Ahmed Raza Khan Barelvi, the 19th century founder of the Barelvi sect of Islam, Khadim Rizvi made his first entry into mainstream politics in the by-polls of NA120, the elected constituency of former prime minister Nawaz Sharif which fell vacant after his disqualification amid Panama Papers investigations.

Pakistan has the second largest number of Muslims in the world after Indonesia.