Annual Haj rituals kick off in Makkah amid coronavirus 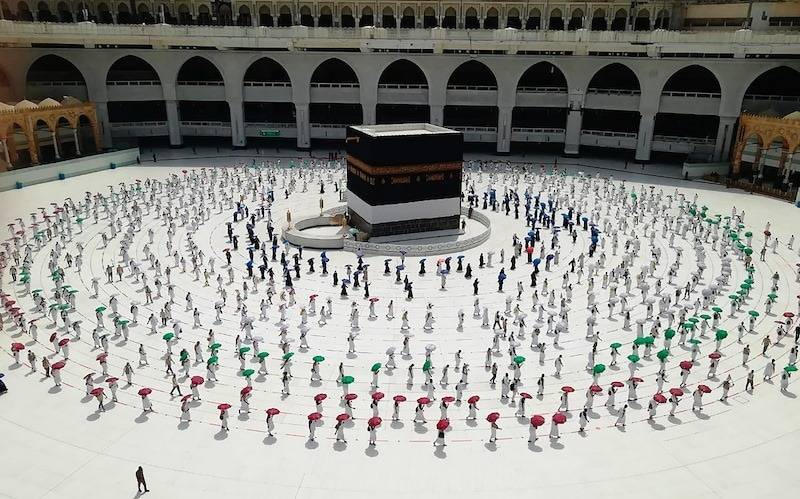 MAKKAH – Annual Haj rituals have begun in Makkah with the arrival of pilgrims in Mina amid coronavirus outbreak.

Only around one thousand pilgrims will perform symbolic Haj this year as the Saudi Arabia has announced crowd control restrictions put in the wake of Covid-19 pandemic. Normally, over two million people perform Hajj.

For the first time in decades, international travelers have been barred from the Haj due to Coronavirus pandemic. Some seventy percent of the worshippers this year are foreign residents of Saudi Arabia, with the rest being Saudi nationals. All of those selected to take part are aged between 20 and 50.

As part of precautionary measures, the pilgrims will wear face mask and observe social distancing. The Saudi authorities have also banned touching Khana Kaaba and Hajr-e-Aswad.

After offering Fajar prayer on 10th of Dhul Hijjah in Muzdalifah, pilgrims will move to Jamaraat and pelt stones on the largest Jamra, representing the devil.

The pilgrims will pelt seven pebbles on three each Jamra or Shaitan on 11th and 12th of Dhul Hijjah and leave Mina before sunset. Then a sacrifice would be made in which a lamb or sheep is slaughtered.

After this, men's heads are shaved, while women cut a lock of their hair and the pilgrims remove their Ihrams and wear normal clothes.

Then the Hujjaj will do Tawaf-e-Ziarat and Sai and return to their tents in Mina.

Finally, pilgrims will do a farewell Tawaf in Masjid-al Haram before leaving the holy land to complete their Haj.