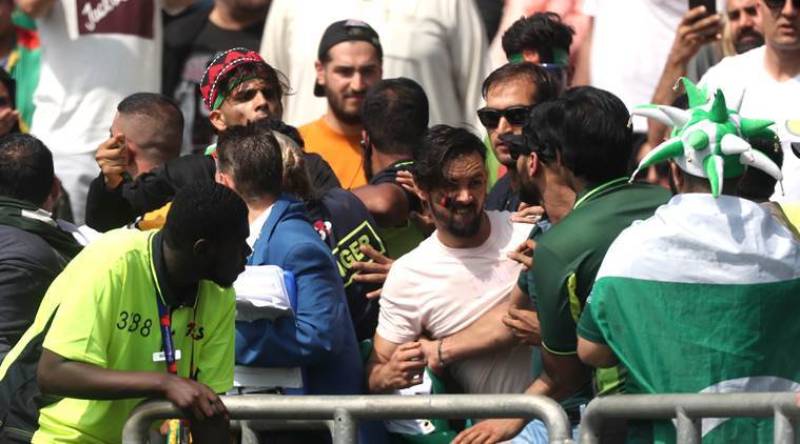 LEEDS - Supporters of Afghanistan's team lost temper during a crucial match against Pakistan and manhandled the fans of Green Shirts on Saturday.

The Afghan team lost early wickets in the match that could have provoked the Afghan fans, however, a few of them started verbal spat with Pakistani fans inside the stadium in what appears to be an unprecedented event in modern day cricket.

Clashes outside the stadium have been a part and parcel of Cricket as tension runs high in high-octane encounters, however, the behavior displayed by the Afghan fans was amateurish to say the least.

You can teach a nation how to play but you can’t teach them class or make them civilized. pic.twitter.com/8QXGX5n0U1

A couple of videos making rounds on the internet show the fans of Afghanistan losing temper and engaging in clash with Pakistani fans; a few of the raged fans also hurled bottled on the Pakistani supporters inside the stadium.

Why are Afghans mobs attacking Pakistani fans & journalists for celebrating & now #Headingley stadium security? If #AfghanAtalan are not playing the way you wanted, it doesn't mean you act like animals & ruin the day for the rest of us too. Learn to live with the outcome #PAKvAFG pic.twitter.com/0fCNzoIttA

As per the accounts narrated by Cricinfo, the Carnegie Pavilion Stand became a battleground during the match to the extent that few of the viewers had to be evicted from the stadium.

The spirit of sportsmanship was tarnished by the fans of Afghanistan as few of them jumped the boundary wall and allegedly tried to occupy seats without a ticket.

Although the fighting spirit of Afghanistan's Cricket team is being lauded on a global scale, same is not the case with the behaviour displayed by its supporters who were caught on camera resorting to rowdiness.

The bahaviour of Afghan fans was well noted by ICC as well, a spokesperson of which also issued a statement.

"We do not condone this type of behaviour, and will take appropriate action against any anti-social behaviour that spoils the enjoyment for the majority of fans," the spokesperson said.

Nonetheless, Pakistan brushed aside Afghanistan in the World Cup clash by three wickets, reigniting hopes about reaching the semis.