LAHORE- Sexual harassment is becoming a major issue in the entertainment industry. Earlier this year singer Meesha Shafi accused Ali Zafar of harassing her multiple times, the matter is in now being dealt legally. Later many other actors also started sharing their personal experiences through their social media accounts.

Recently, supermodel Zara Peerzada also shared her bitter conversation with the top celebrity services of Pakistan. Peerzada shared the screenshots of the chat with her and the agency representative as a proof of how the women are being tortured in the society for the sake of respect and blackmailed easily.

Sharing her annoying experience on Instagram the model stated that  “Soliciting every woman in entertainment is a major problem in this country's narrative of the female entertainment.”

Below are the screenshots of the conversation : 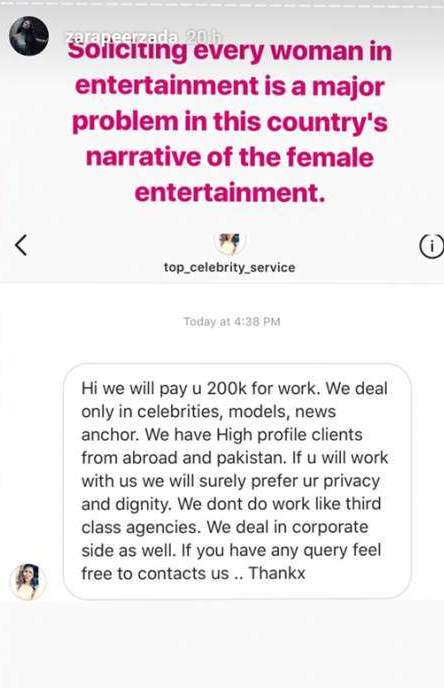 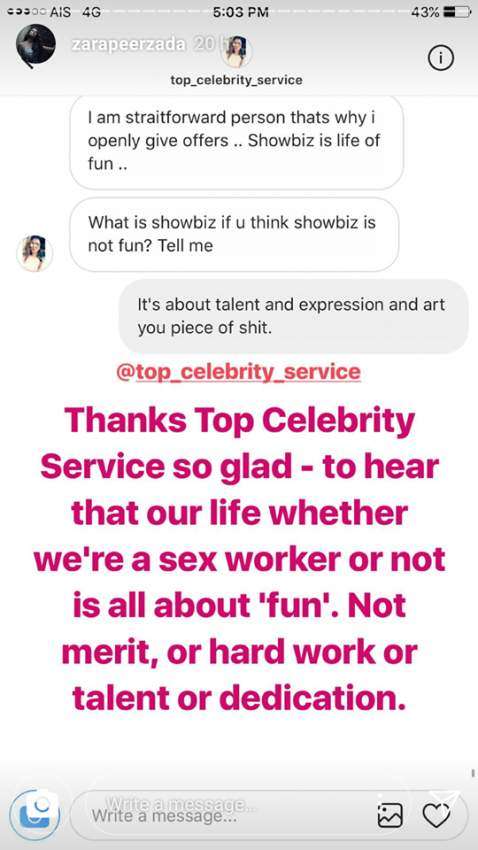 Zara's reply resulted in her receiving a very abusive reply. "You are a slut, I will catch you red-handed in a party and tell everyone that you act all piously in direct messages. Where is your talent now? I will trace you to the party soon. Do you think everyone is a fool?”

Isn't it's highly disrespectful? you will also agree to it after reading the message added below: 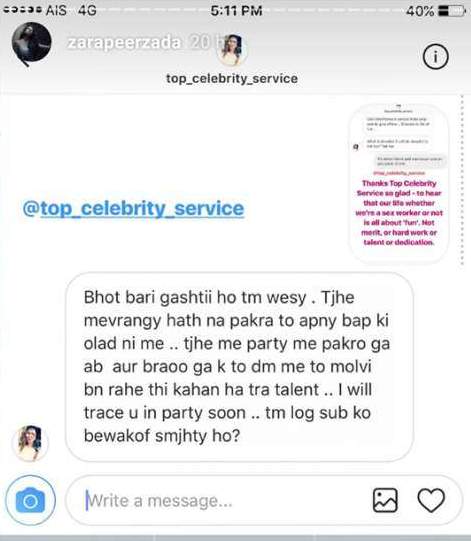 Commenting on the threat message, Peerzada said, “All of you shocked by the content of these messages must understand that this is only a fraction of what women in entertainment suffer on a daily basis, whether we are Meesha Shafi or Mahira Khan or just a small time model. There are daily threats and abuse because of the cultural and national perspective of women in entertainment.” 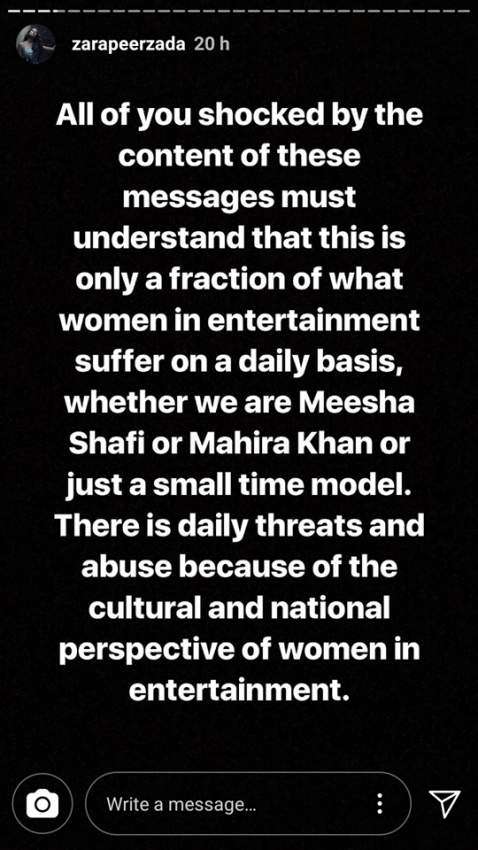 She further expressed, “Friends the answer to this is not 'just ignore it'. Telling women to ignore their reality is never the answer. That is an opinion that comes from an incredibly privileged place of power. It is not the job of women to ignore and remedy the evil the in the world. It is not the job of women to turn a blind eye to cultural and global offensives to us. It is our job to collectively call them out and rectify them.” 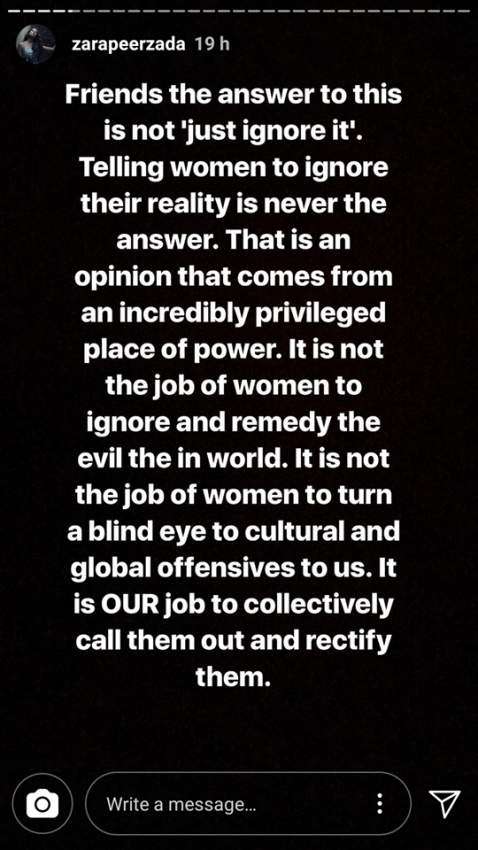 Regarding prostitution, she said, “I will reiterate that I have nothing against sex workers. As a good friend Eman Suleman once said 'don't insult them, it takes courage to be one. Courage I have not.' My anger is the perspective and assumption of women in entertainment as a whole. No matter what we do, what accolades we earn this is all we will be reduced to by a community, by a country.” 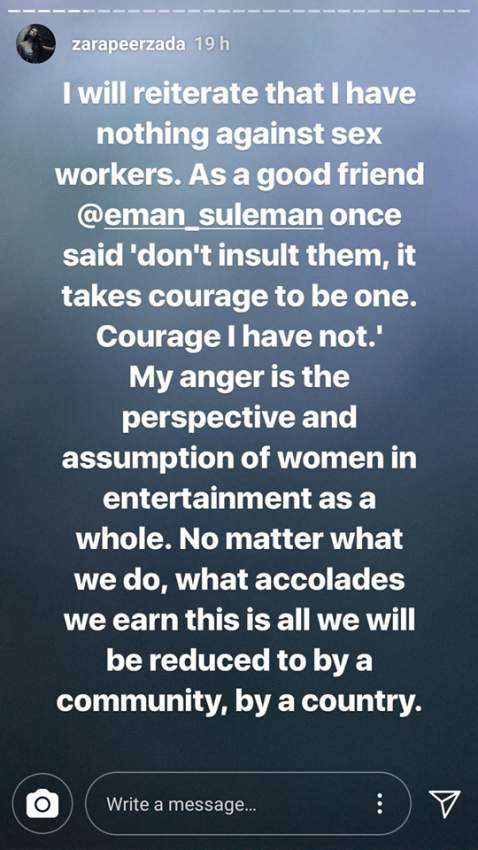 In the last message, she gave a strong message on behalf of all women that they are not afraid of such threats rather these are sick acts. 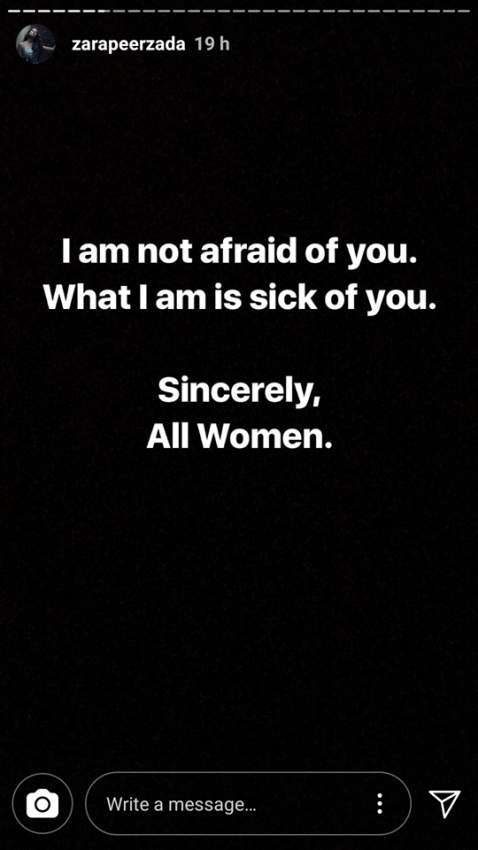 The story posted by Zara received feedback from her fans and followers and she felt supported. She said, “Thank you all for your positive messages and kind words. I woke up feeling less alone today, and I think for any human that's a wonderful gift.”

'Sexual harassment' is becoming so common in our industry as many celebrities are sharing their stories and experiences, we hope that things get better and such acts should be avoided as they create a bad image of the industry leaving scars and negative impact.