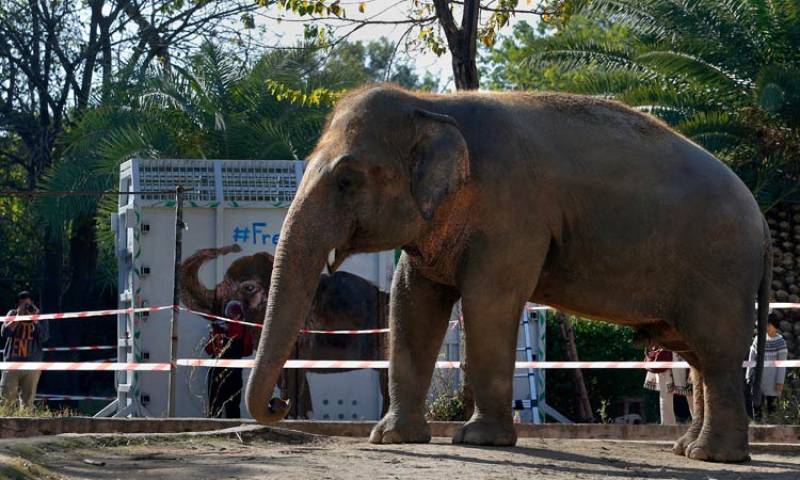 ISLAMABAD – After spending 35 years in a Pakistani zoo, the 'world’s loneliest elephant' is flying off to Cambodia in a special Russian jet that has been arranged to transport the mammoth.

Kaavan was brought to Pakistan as a young calf from Sri Lanka after the country gifted the elephant to Pakistan 35 years ago. Another elephant Saheli had come with him but she died in 2012.

The climate change ministry issued a permit for Kaavan to fly out of the country.

Speaking to journalists, Malik Amin Aslam said that the animal is being taken to the Islamabad airport from the Marghazar Zoo.

A transport crate had also been built and the elephant had to be habituated to it for departure to the Cambodian wildlife sanctuary.

ISLAMABAD – American singer and actress Cher, who is dubbed as ‘Goddess of Pop’, arrived in Pakistan ...

Commenting on the animal's departure, PTI Senator Faisal Javed Khan said that Pakistanis are embarrassed for not taking care of Kaavan.

In 2002, zookeepers chained him over 'violent behaviour' but unchained him later that year. Activists dubbed him the “world’s loneliest elephant” after his plight gained international attention and the unhappy elephant was diagnosed as emotionally and physically unstable.

In July, the Islamabad High Court approved the plan to move Kaavan to Cambodia.

Mother nature has blessed Pakistan with countless bounties. Be it the mighty mountain ranges or the far stretched, deep ...