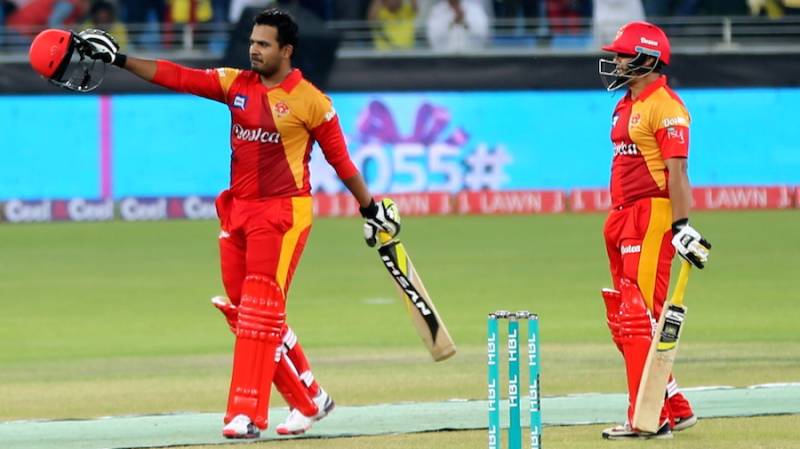 LAHORE - Pakistan's star batsman Sharjeel Khan was handed a five-year ban by the country's cricketing board for his involvement in spot-fixing scandal during Pakistan Supre League 2017.

In an interim order, it was said that for next two and a half years Khan will not be allowed to play domestic and international cricket, and for the rest of the years, the board authorities would monitor him.

"Sharjeel is banned for five years, which has two-and-a-half year suspended, after the proceedings of the case," said Asghar Haider after Sharjeel accepted all the five charges leveled against him.

On violation of five clauses, a charge sheet against the opening batsman was presented on Feb 18 while the hearing of Khan’s case started on March 24.

Earlier, Khan denied his involvement in relation to allegations of spot-fixing during the high-octane Pakistan Super League 2017.

'I have not done anything wrong. Everything will get clear soon,' he said when approached by journalists.

No fine was imposed on the cricketer who was found guilty of intentionally playing dot-balls during the second season of Pakistan Super League that was organized in February-March.

Talking to newsmen after the hearing, Sharjeel's lawyer expressed his reservations over the verdict and said that the ban would take effect from February 10, 2017

On the other hand, PCB legal advisor, Mr Taffazul Rizvi expressed that Sharjeel was a competent player and PCB imposed a minimum possible ban on him.

'Sharjeel was punished on the basis of solid evidence' affirmed Rizvi.

The cricket fans in Pakistan were taken aback when in February, this year during the first week of Pakistan Super League, PCB sent back two cricketers Sharjeel Khan and Khalid Latif home besides suspending them.

The reason for the mysterious return was found to be the duo's alleged involvement in spot-fixing and links with bookmakers.

“Sharjeel and Latif have been suspended and the rigorous and wide-ranging investigation by the PCB supported by the International Cricket Council will continue as part of collective efforts to protect the integrity of the sport,” the PCP said in a statement.

The tribunal after multiple hearings concluded its inquiry and imposed a five-year ban on tSharjeel Khan while the fate of Khalid Latif still hnags in limbo.

Besides the duo, PCB widened the scope of investigations and also imposed few restrictions on left-arm pacer Muhammad Irfan after thorough investigations regarding alleged spot-fixing.

1/3: PCB ACU has questioned M Irfan. Inquiry will continue. He does not face any immediate suspension.

Irfan along with four other cricketers including Shahzeb Hassan and Zulfiqar Babar of Quetta Gladiators were also grilled by PCB, however, they were cleared of any allegations and were allowed to continue playing remaninig matches of PSL.