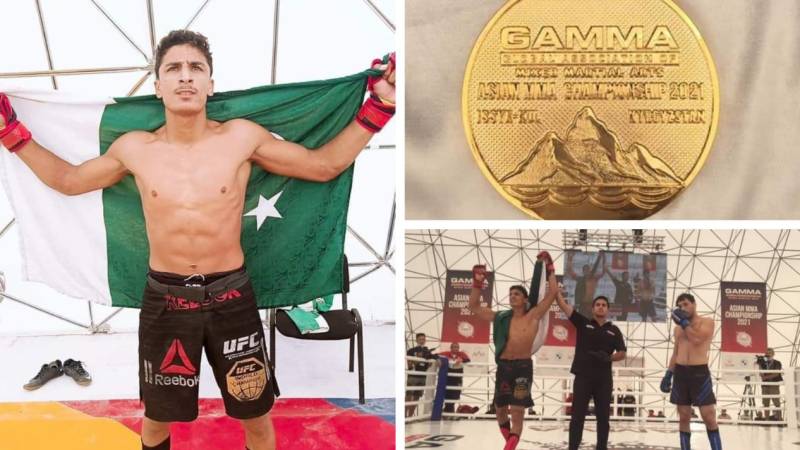 NUR SULTAN – Pakistani Mixed Martial Arts fighter Shahzaib Khan has secured a Gold Medal at the GAMMA Asian MMA Championships 2021 which was held in Kyrgyzstan from August 24 to 28.

Khan, who hailed from Sindh, qualified for the final by defeating the Indian fighter in the semi-final. The young blood defeated the Kyrgyz fighter within a minute in final match and set a new record by clinching a gold medal for the South Asian country. He was reportedly trained by Mr. Imran Qasim at Badsha WuShu Academy.

The mixed martial arts athletes were selected from different cities of Pakistan including Allah Gul Afridi from KPK, Liaquat Ali from Balochistan, Asim Khan, Shayan Amin, and Shahzaib Khan from Sindh while Shariq Ali was manager-cum-coach of the squad.

Reports quoting national federation members said the team was supposed to attend in full strength, however, the lack of funds forced the officials to send a six-member squad.

Meanwhile, Pakistan MMA President Zulfiqar Ali has felicitated the players for making the nation proud in the Asian Championship. “The PMMAF will continue its path to success and will try hard to ensure maximum participation in all events in future”, he said.

The local MMA community has also extended their greetings on this achievement of the players.