This British Envoy is in love with Pakistani food and Urdu

He shared his love for Pakistani cuisine and cities on national TV programme saying that “I am enjoying my time in Pakistan. I hope you don’t mind me trying my imperfect Urdu".

Speaking about the food, he shared in his impressive Urdu that “Pakistani food is very delicious. You can give me Daal, Saag or anything; I really like it.”

“Lahore is Lahore. It fed with me with a lot of food that I had to do dieting,” the UK envoy added who earlier shared a photo of delicious food he tried in the second largest city of Pakistan. 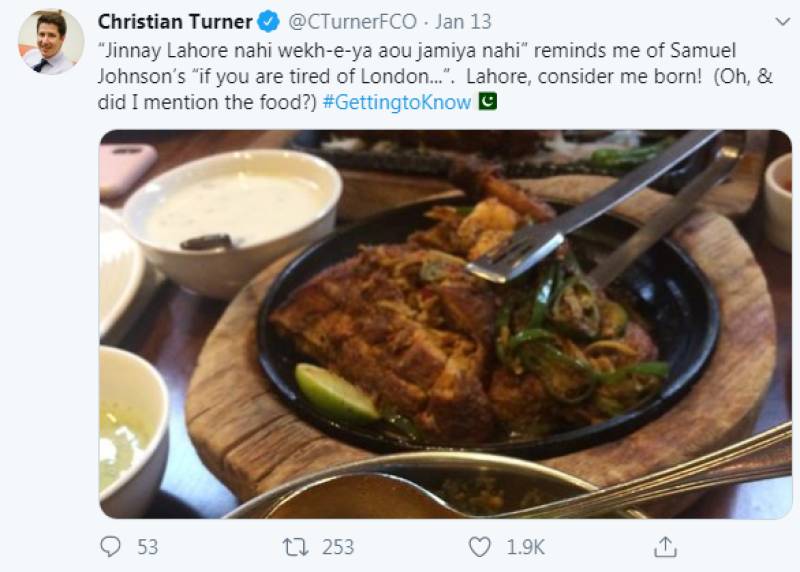 Turner had also visited Badhshai Mosque and some other historical monuments in Lahore earlier in January.

About cricket, Dr Turner said “Cricket runs in our blood. We have some top English players coming to Pakistan Super League (PSL) this year which is very exciting,” he said.

He shared that “Next month, our most prestigious cricket club Marylebone Cricket Club (MCC), is bringing a President’s XI  to playing a series of matches in Lahore.” Former Sri Lankan player Kumar Sangakkara will be captaining MCC on the tour to Pakistan.

“I hope that is the first step on a path to return of the England team,” Turner further added.

“I have made no secret of the fact that I would like England playing here. Our partnership must grow stronger,” he concluded.