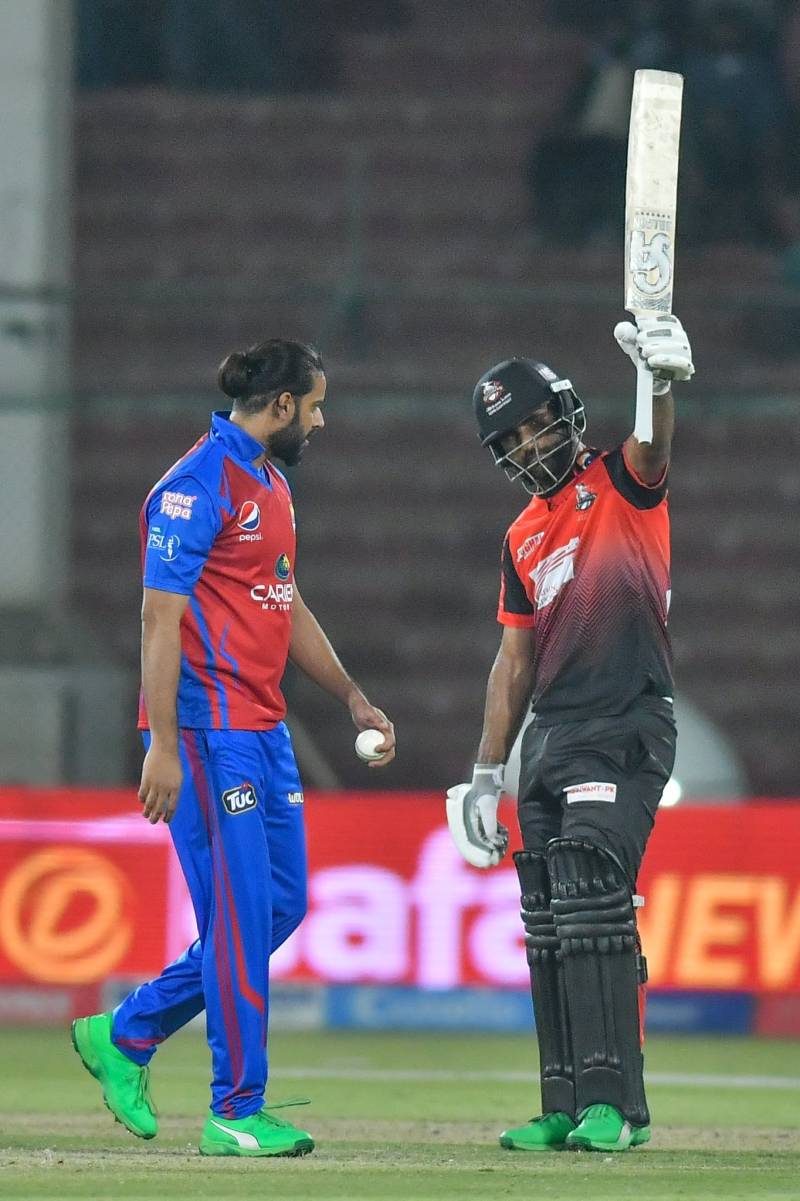 KARACHI – Talented Fakhar Zaman powered Lahore Qalandars to victory against Karachi Kings by hitting 106 runs in 60 balls in the sixth match of the Pakistan Super League 7 (PSL 7) at the National Stadium in Karachi on Sunday night.

So it’s @lahoreqalandars who take the game away tonight. Lots of exciting performances but it was @FakharZamanLive who single-handedly stole the show. #HBLPSL7 l #LevelHai l #KKvLQ pic.twitter.com/RTFjRUdKyS

Earlier, Karachi Kings managed to score 170 runs against Lahore Qalandars at a loss of seven wickets in 20 overs in the sixth fixture of the Pakistan Super League 2022 at National Stadium in Karachi on Sunday.

Sharjeel Khan remained the top scorer as he made 60 runs in 63 balls, while Babar Azam scored 41 runs in 33 balls.

From the Lahore Qalandars' side, Haris Rauf claimed three wickets for 33 runs and Muhammad Hafeez took one wicket for just four runs.

The Babar-led Karachi Kings haven’t made a great start to their campaign in the seventh edition as they lost both starting games. Following an early setback, they are looking to perform better in the crucial encounter against the Lahore Qalandars.

Multan Sultans and Quetta Gladiators have thrashed Karachi Kings in their first and second matches and the comeback in today’s game is the only way to be in a positive spirit.

It’s Karachi vs Lahore. Karachi will play in front of their home crowd. The fans are ready. The teams are ready. Waiting for an epic contest as always! #HBLPSL7 l #LevelHai l #KKvLQ pic.twitter.com/rFxZi1oedE

Mohammed Nabi also struggled to hit the straps as he only managed to score 17 runs in 10 deliveries and the whole squad played with a defensive approach. Sharjeel Khan was the only batsman to score the highest in the match.

Lahore Qalandars, which is led by a new captain Shaheen Shah Afridi, lost their opener against Rizwan-led Sultans after a tight clash on Saturday. Chasing 207, Multan needed 16 off the last over from Haris Rauf but Khushdil Shah, who came into bat after Sohaib Maqsood lost his wicket at a critical stage, played well.

Fakhar Zaman smashed 76 and was backed by Kamran Ghulam. On the bowling side, Rashid Khan and David Wiese were in form but the duo failed to impress fans.

Karachi Kings lost the opening match of the seventh edition of Pakistan Super League (PSL) to Multan Sultans at ...