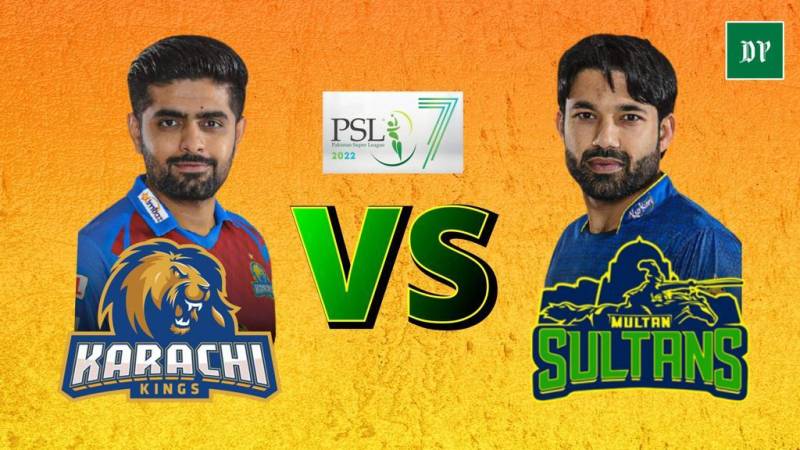 Karachi Kings lost the opening match of the seventh edition of Pakistan Super League (PSL) to Multan Sultans at National Stadium on Thursday.

Earlier, a three-wicket haul by Imran Tahir restricted the hosts to an easy total of 124 runs after Multan Sultans captain Mohammad Rizwan won the toss and decided to bowl first.

Sharjeel Khan (43) and Babar Azam (23) tried to build a strong opening stand in the match but the pair was broken by Khushdil Shah who removed Azam.

Multan won the toss and chose to bowl first. Here’s the team outlook for both teams: #HBLPSL7 l #LevelHai pic.twitter.com/GiFI3FX2Ly

Beside Tahir’s three-wicket haul, Shahnawaz Dahani and Khusdil Shah took one wicket each.

As Sultans turned to the crease, skipper Mohammad Rizwan played a fine 52-run not-out knock to help his team start this year's PSL campaign on a winning note.

Sultans chased down the 125 run target in 18.2 overs with Shan Masood (26) and Sohaib Maqsood (30) remaining notable scorers besides Rizwan.

Babar Azam: “I am very excited to be leading Karachi Kings this season. This is the first instance that I will be captaining a side in the HBL PSL and I am looking forward to it.

“The first match of the tournament always has a lot of eyeballs and Multan Sultans can prove to be a tough opposition. I am sure the fans will get to see a thrilling contest.

“Peter Moores is a seasoned coach and I have had fruitful discussions with him. Karachi Kings will display good, competitive cricket this season.”

Mohammad Rizwan: “We have all the potential to defend our HBL PSL title and we will be taking the field tomorrow with that mind set. This season will present us new challenges and we will have to plan accordingly.

“Babar Azam is a wonderful batter and captain, and his leadership will certainly have a good impact on Karachi Kings. I am hopeful that the HBL PSL 7 will kick off with a great contest between the two sides.”