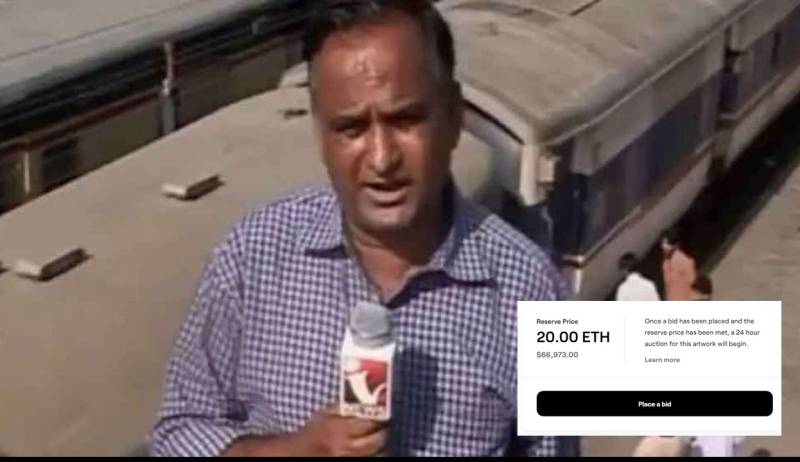 KARACHI – Famous Pakistani reporter, who had first gone viral in 2008 with his iconic clip, is now selling his Karachi Se clip as a non-fungible token (NFT) and he expects bidding to start at $64,354.

The famous clip was originally uploaded on a video streaming platform in 2008 which featured Chand who was struggling to report the Eid Festival frenzy at the busy railway station. In a bid to record the clip to broadcast on a private news channel, the journalist was being continuously interrupted by passersby; while the original clip has amassed more than millions of views so far.

A Non-fungible token is a unique digital asset encrypted with the creator's signature, which authenticates it as their original work. Many famous artists have become coveted collector's items and have enjoyed an explosion in popularity in recent days and Journalist Chand Nawab, who got fame with the ‘Piece to Camera’ clip, is the latest to jump the bandwagon.

The fans of the Pakistani reporter got shocked as the minimum bid price to purchase the iconic clip is 20 Ethereum tokens which is around Rs 10 Million PKR.

“I’m Chand Nawab, a journalist, and reporter by profession. In 2008, a video of me surfaced on YouTube in which I fumbled while reporting Eid Festival frenzy at a Railway station. While reporting, I was contently interrupted by people, my fumbling and constant irritation made this video viral getting millions of views on YouTube and Facebook”, he wrote in the bio section on the bidding platform. 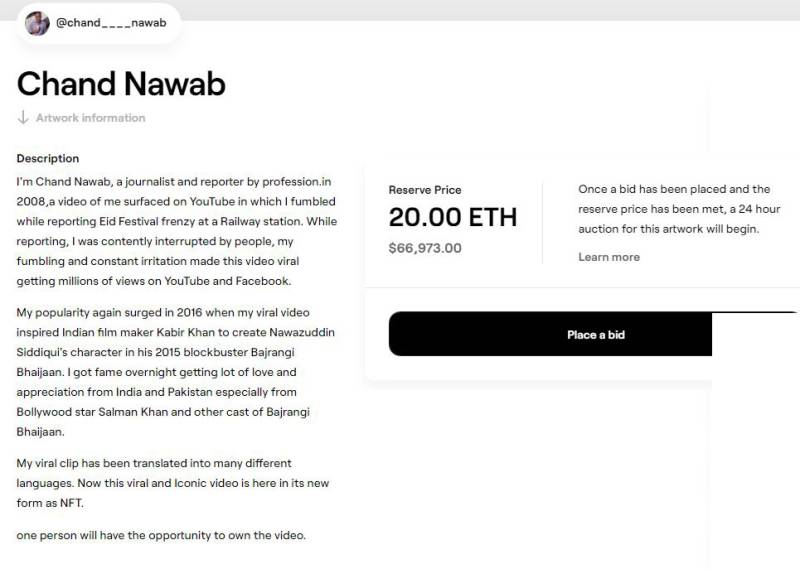 The caption also added “My popularity again surged in 2016 when my viral video inspired Indian filmmaker Kabir Khan to create Nawazuddin Siddiqui's character in his 2015 blockbuster Bajrangi Bhaijaan. I got fame overnight getting a lot of love and appreciation from India and Pakistan especially from Bollywood star Salman Khan and another cast of Bajrangi Bhaijaan”.

The development is a follow-up of a famous Friendship meme that was auctioned at $51,776.

The social media post told the story of Rana finding a new best friend in Salman Ahmad Naqash and taking away the title from Mudasir Ismail Ahmad, who had been Rana's best friend until then.