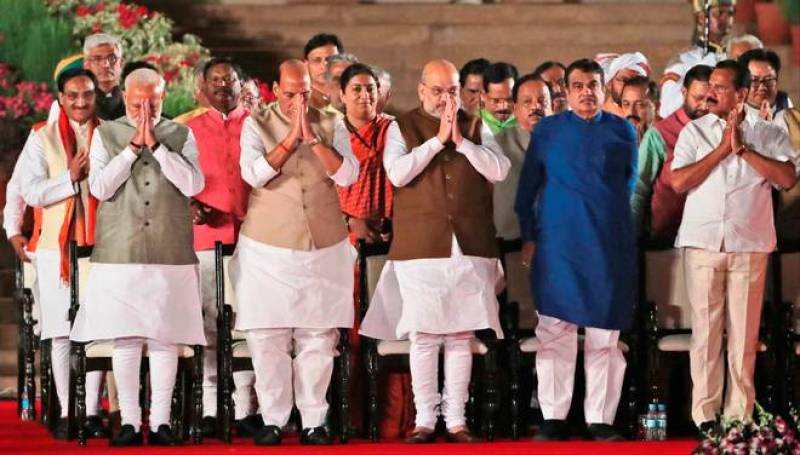 A controversial figure, Shah was accused of ordering police to carry out three extrajudicial killings in his home state of Gujarat in 2005. He was banished from the western state for two years before being cleared in 2014 for lack of evidence.

Recently he hit the headlines after comparing illegal immigrants to "termites" that must be thrown out of the country.

But he has been a close confidante of Modi for nearly two decades and some analysts say Shah is now in place to take over the party if Modi stood down.

"Congratulations to @AmitShah ji who transformed BJP into one of the largest political organisations in the world & will now play a bigger role in building #NewIndia," tweeted Shah's cabinet colleague Smriti Irani.

Irani, who defeated opposition Congress chief Rahul Gandhi in his family bastion of Amethi in the election, was handed the ministry of women and child development.

Facing major challenges with the economy, job creation and a farm debt crisis, Modi replaced around three dozen ministers and deputies from the last administration, bringing in many new lawmakers.

As finance minister Sitharaman will be expected to steer India's course through reforms and arrest an economic slowdown in Asia's third-largest economy.

The previous finance minister, Arun Jaitley, asked not to be considered for a government post because of ill health.

The induction of Jaishankar, a China expert and a former ambassador to Washington, as the new foreign minister was seen as a sign that Modi will put more emphasis on

diplomacy in the sensitive area around India in his second term.

Jaishankar, who was the top foreign ministry official until his retirement last year, was an influential advisor to Modi on diplomacy during his first five years in power.

Jaishankar took the mantle from Sushma Swaraj, a party veteran who underwent a kidney transplant in 2016 and has been beset by poor health.

Modi also set up a new ministry of water power in keeping with his promise to make safe drinking water a priority for his government.

Modi, 24 cabinet rank ministers and more than 30 deputy ministers were sworn in at the presidential palace on Thursday.

Presidents and prime ministers from neighbouring Bangladesh, Sri Lanka, Nepal and the Maldives were present, but arch-rival Pakistan was not among those invited.