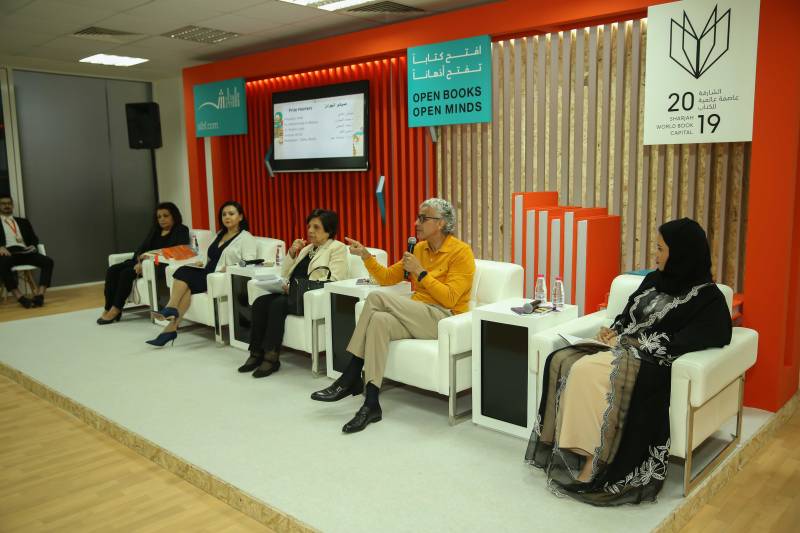 SHARJAH - How do literary awards affect the development of the cultural movement, especially with the emergence of writers labeled as ‘prize hunters’? Four leading literary personalities from the Arab world shed light on this topic yesterday (Wednesday) at a panel discussion held on the opening day of the 38th edition of the Sharjah International Book Fair.

Amongst the four-member panel team were Lebanese author and critic Dr. Yumna Al Eid, the Cultural Personality of the Year at SIBF 2019; Dr. Shahla Ujayli, a Syrian novelist and Professor of Modern Arabic Literature and Cultural Studies at the American University in Jordan; Iraqi writer Maysalun Hadi, author of 15 novels and 10 short story collections; and Dr. Mohammed Al Mazouz, a writer and research professor of political anthropology from Morocco and was moderated by Salha Obeid.

Delving into the ability of the jury committees in selecting the best of the literary works for an award, Dr. Mohammed Al Mazouz was critical of the manner in which awards were handed out in the Arabic literary scene. “A prize has value only when it is awarded for the quality of your work; not when ‘favouritism’ is the deciding factor.”

Many powerful works have fallen by the wayside to be forgotten forever solely because of this reason, he said. “This ideology has killed innovation and creativity in the Arab world.”

Dr. Yumna Al Eid who has been on several jury committees said that although some literary prizes may seem unjustified, it was essential to have transparency even in the selection of jury members who were selecting the awards. “We need to ask the right questions to derive at the answers,” she said, asking, “Is the issue with our culture, or is it the prize itself or the committee?”

However, she admitted, that the monetary benefits associated with awards often enabled writers to dedicate their lives to writing, instead of having to work multiple jobs.

“For me, there are two ways in evaluating a novel – in the way it tells a tale; and its artistic merit,” she said, adding, “I welcome all prizes as long as they serve literature and art.”

Winner of multiple prestigious awards and shortlisted twice for International Prize for Arabic Fiction, Dr. Shahla Ujayli pointed out that although many influential awards have come with a measure of controversy and disappointment, it is still a positive development as they also have the potential to be fair.

“A prize is an award for an effort, for your hard work,” she said. “Even being nominated for an award places new responsibilities on your shoulders. It makes you vulnerable to criticism from all quarters.”

She described how critics attributed her character’s focus on her disease during her country’s civil war in A Sky So Close to Our House as stemming from the author’s own political views. “I believe that your work should show the whole truth, not half-truths,” she said, adding, “Eventually, all political conflicts get leveled, but books remain.”

Maysalun Hadi took the view that mistakes and errors in judgment could happen in any domain, not merely in the world of literary prizes. “Sometimes, the ‘best of the best’ may be the best of what we have – we need to acknowledge this fact,” she said.

“Awards encourage the youth to read and even novels that get nominated drive people to read, and we should be thankful for that,” she concluded.