Meena Kumari, the woman who gave a new definition to womanhood 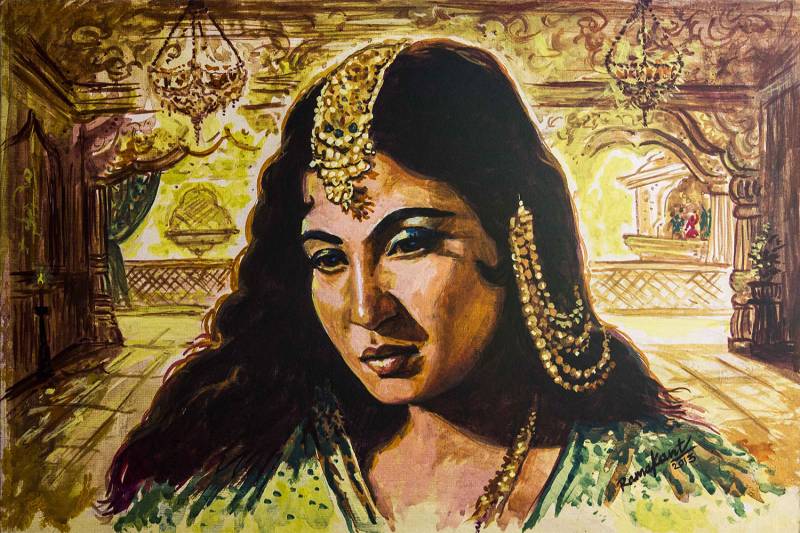 This became so famous among Urdu poetry lovers that it became part of a couplet written by legendary Bollywood actor Meena Kumari - the woman who gave a new definition not just to acting, but also to womanhood.

She was a woman much ahead of her times. Perhaps this is what led to her catharsis.

A free bird trapped inside her unregimented self, Meena Kumari's life was a sad tale of success, unfulfilled love and destruction.

Meena Kumari was born Mahjabeen Bano. Regarded as one of the greatest actors that Hindi cinema has produced, she was also a thinker and a poetess.

Few people seem to know that Meena Kumari had immense love for books. She was not formally schooled as she started her career at a very early age but she was still fluent in many languages and was an avid reader. Having Kaifi Azmi as a mentor, she had started composing poetry. Her love for letters brought her close to Gulzar while she was still married to her only husband Kamal Amrohi.

"The marriage became what all marriages turn into: a bitter contest of gender roles, failed expectations and looming suspicions."

According to Vinod Mehta's brilliant biography about the actress, Meena discovered “areas of gentleness, humanity and loyalty” in Amrohi. 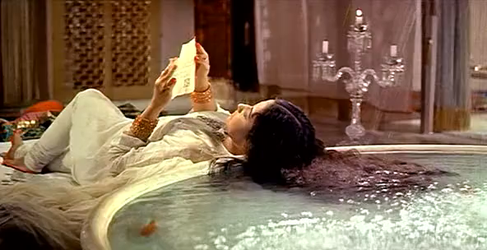 Both exchanged letters, spoke all night on the phone which caused their life-long insomnias. Meena rebelled against her family and secretly tied the knot with Amrohi. Being the prime income earner of the household, Meena was not to be married without appropriate financial calculation. This is why her father resisted the wedding. Meena did not surrender to his pressure and left her house and walked into Amrohi’s home and started living there. This relationship lasted for over a decade.

The marriage became what all marriages turn into: a bitter contest of gender roles, failed expectations and looming suspicions. Amrohi started imposing restrictions. Like typical husbands, he wanted that no man would enter Meena’s make-up room in the studios. Amrohi had set timings for her to return home, etc. However, Meena refused to comply with any of these restrictions.

"To please him she starts drinking and ultimately finds some solace in another man." 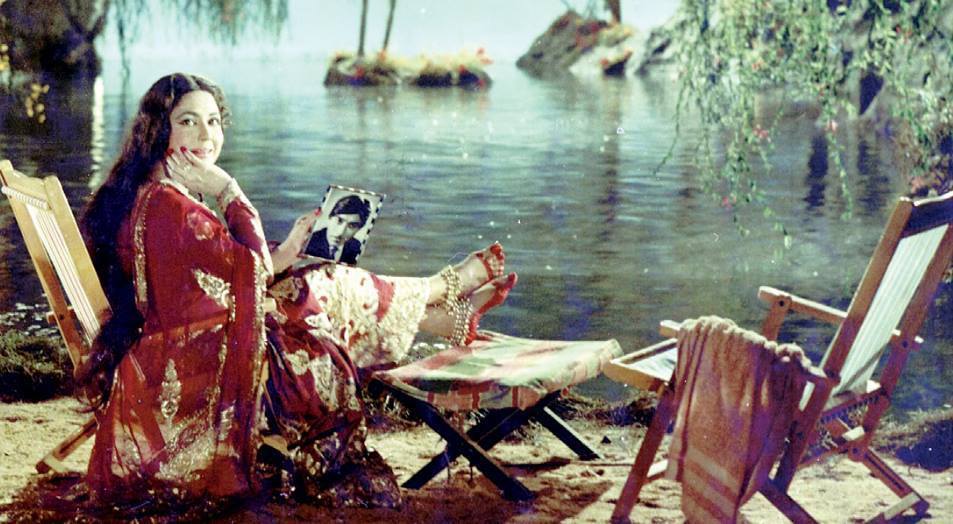 Eventually, she parted ways and moved in with her sister and brother-in-law. She never returned.

Amrohi had hired an assistant to remain close to Meena all the time. It was in the studios that Meena let him into her studio and made a public display of affection for him only to give Amrohi and his spies a clear message.

This personal drama coincided with her great success on the silver screen. Stunning performances in films such as Parineeta, Dil Apna Aur Preet Parayi, Sahib Bibi aur Ghulam and Main Chup Rahungi made her the undisputed queen of those times.

Mehta writes that in “every frame of the film she fills the screen with her presence”, along with focusing on the great sex appeal that Meena exuded in the immortal song  “Na jao saiyya chhuda ke baiya” from the unforgettable Sahib Bibi aur Ghulam.

"It was an off-beat role that challenged the primacy of a typical suffering sati saavitiri of mainstream Bollywood’s imagination."

An excerpt from Meena’s diary throws light on the great performance she gave in the film: “This woman (Chhoti Bahu) is troubling me a great deal. All day long — and a good part of the night — it is nothing else but Chhoti Bahu’s smiles, hopes, tribulations… Oh! I am sick of it!”

At the age of 32, Meena acted as Chhoti Bahu. Chhoti Bahu was a character of a submissive Hindu Bengali wife clamouring for her philandering husband’s love and attention. The husband, a decadent zamindaar, remains unmoved by her efforts. To please him she starts drinking and ultimately finds some solace in another man. But the results are tragic. Meena’s real life intersected with this film as this was the time when she started to imbibe – starting with small doses of brandy turning into full-scale addiction. 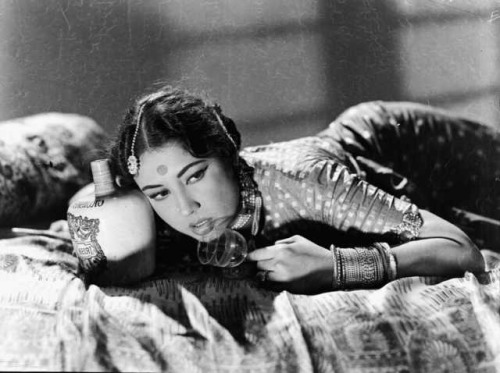 Guru Dutt’s full use of Meena’s beauty and acting skills makes this character an unforgettable one. What made it even more special was that it was an off-beat role that challenged the primacy of a typical suffering sati saavitiri of mainstream Bollywood’s imagination.

The final chapter of Mehta's book gives us a glimpse of the person that she was. She played with wealth and spurned it. She gave money not only to those who were too proud to ask but also to those who didn’t hesitate. It was her ability to listen to people that comes across as her strongest trait. Perhaps this was the inspiration behind her poems.

The dominant strain in Meena Kumari’s poetry is love, or rather the impossibility of finding love. Her poems were set to music by Khayyam and were titled “I write I recite”

Mehta’s book also tells us about the signature white dress that Meena Kumari used to where in all her public appearances. Shabana Azmi reportedly told someone how she was struck by all things white in Meena’s house when she had gone to see her ostensibly at the behest of her father Kaifi.

Meena loathed ostentation and parties and “the synthetic bonhomie of the film world. Most people considered her a snob, only intimates knew she was genuinely bored by such occasions”. Yet she appeared at Filmfare award functions in her trademark white saris and used to recite her own or Faiz’s ghazals on such occasions.

"A much younger and already married Dharmendra had nothing to offer in terms of the love and security Meena was searching for." 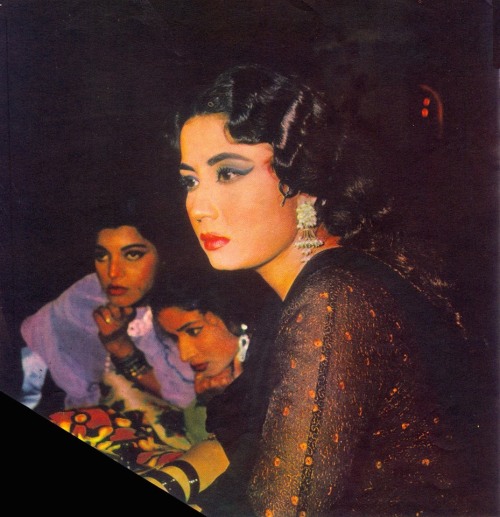 After her failed marriage with Amrohi, Meena’s drinking became excessive and so did the pursuit of pleasure. She had three key relationships afterwards. One of them was with Dharmendra who was patronized by Meena and owed his stardom to her favours. She had worked with him and coached him in the art of cinema, as Mehta notes. However, a much younger and already married Dharmendra had nothing to offer in terms of the love and security Meena was searching for.

Within days of the release of her epic Pakeezah which took 14 years to complete, Meena Kumari passed away. It is reflective of her strong devotion that she finished the film despite her illness and bitterness with Amrohi. Though initially, the film was not received with a positive response, her death changed everything. The movie served as a platform for her fans to pay homage to their enchantress-heroine.

Pakeezah was a story of a ‘pure’, love-seeking woman and cemented that lasting popular image of the heroine: deep sorrow, longing and unsaid verses in those beautiful eyes.

Meena knew how to make her own decisions and choices and also pay for them.

The girl who started out as Baby Meena, a child artiste and a breadwinner of the family, died as Mehta would have us believe, “unloved and unwanted.” In Javed Akhtar's words, “People like Meena Kumari are paradoxes. We try to understand them, we appreciate them, we criticise them, we pity them, we laugh at them, we admire them. But they remain paradoxes.”