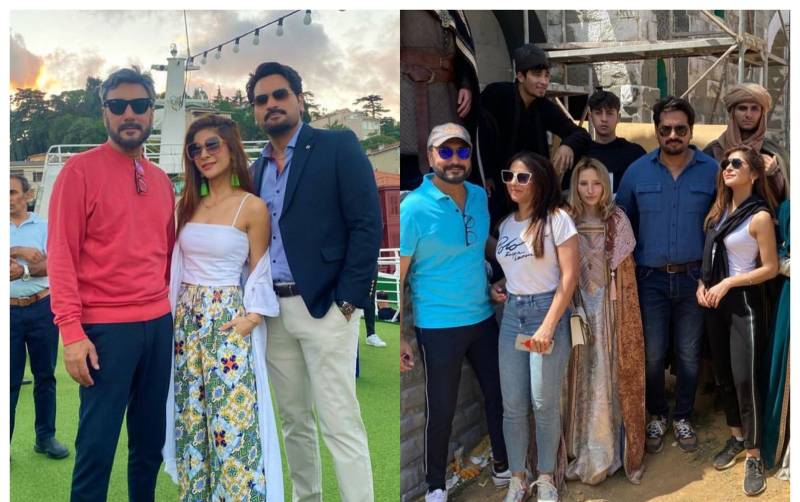 Lollywood superstars Humayun Saeed, Adnan Siddiqui and Ayesha Omar have been storming the internet ever since they were spotted at the unveiling of the sets of Salahaddin Eyyubi in Istanbul, Turkey.

From pictures of our superstars posing together to BTS clips of the Pak-Turk, the netizens have been treated with clicks and they can't wait to watch the series.

Taking to Instagram, the Meray Paas Tum Hou star left the fans delighted as he shared a photo bomb session at the much anticipated first look of the set of Salahuddin Eyyubi where Humayun and Ayesha posed with him.

On the other hand, the Bulblay actor shared a carousel of snaps which also showed Ushna Shah with the Yalghaar trio.

"Humbled, supremely grateful and floored to be a part of history in the making. Thank you Allah, for this fantastic opportunity to tell the world our story, with the coolest team, the coolest crew and in the coolest city ever. One dreams of stuff like this. And I dared to do so. But it’s all HIM. ⚡️

On the sets of the first ever Pakistan/Turkey Colab telling the story of one of the greatest Islamic warriors in the history of world, the great #selahaddineyyubi This is just the beginning. Cannot wait to be in costume, on set and in character. InshAllah!"

The show will reportedly consist of three seasons of four episodes each. The series will be dubbed in a number of languages including Turkish and Urdu. "The series focuses on the Quran, history and religious harmony. How the Quran can be used effectively to govern empires that are embraced by people of all religions," revealed the makers.

Born in Tikrit, Iraq, Salahuddin Ayyubi is also known as the ‘Conqueror of Jerusalem’, taking over the region in 1138.