Contributed By: Muntazir A. Sherazi

Hassan Amin is a hardcore punk and grindcore vocalist, concert organiser, and a filmmaker. His short film Veham, is getting its world premiere at the South Asian International Film Festival in the HBO Short Film Competition category.

Hassan has been around the Pakistani music scene for almost a decade now and his hard work is finally being recognised by the international audience. 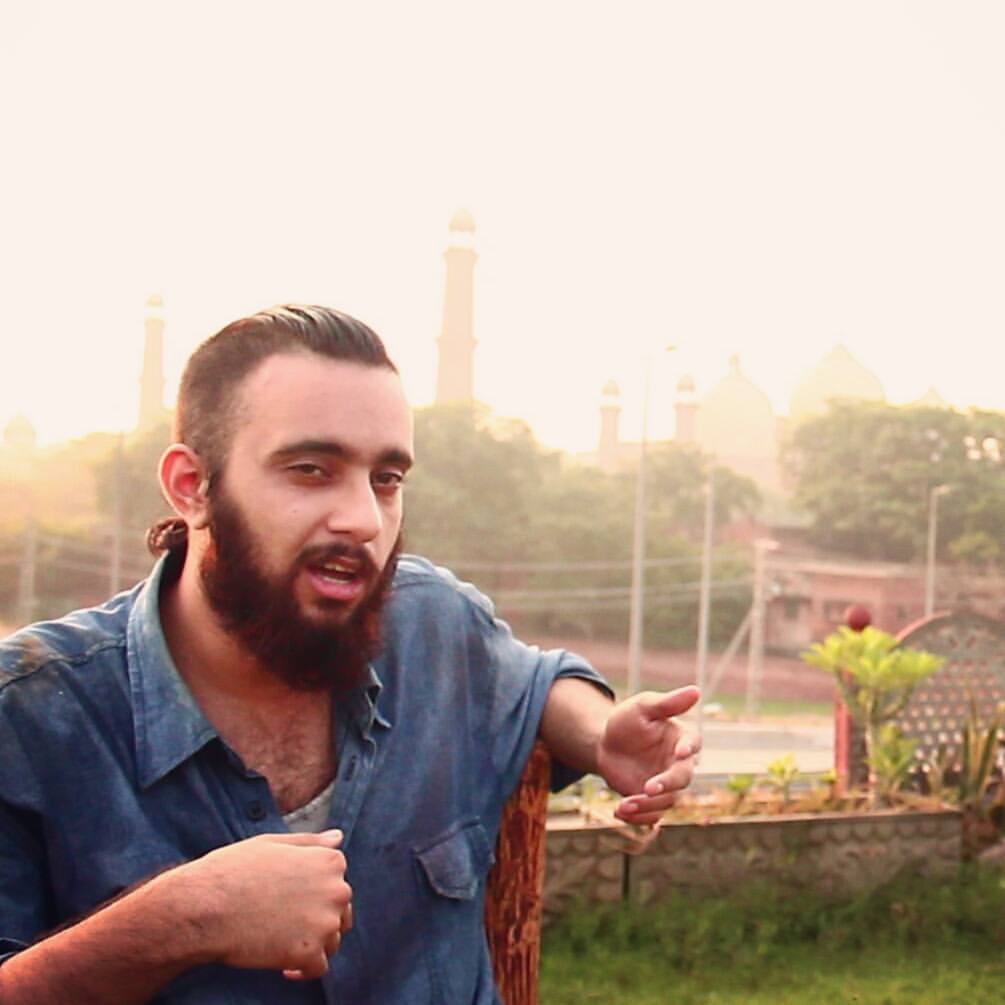 When did you develop an interest in extreme music like grindcore and hardcore punk?

Hassan Amin:  As a kid, I was always searching for the heaviest form of music, gravitating between several extreme genres, mostly rock and metal. I stumbled across hardcore punk after reading the influences of some of my favourite metal bands – Discharge, Crass, Anti Cimex, Black Flag, MDC, stuff like that. I have instantly blown away. Punk wasn’t contained and controlled like metal. It was direct, fast, loud, and aggressive with a heavy political bent to it. As a result, I was also introduced to a lot of socio-political ideas that I was previously unaware of, and it wouldn’t be an exaggeration to state that punk actually changed my entire outlook on life.

Can you tell us about the history of the genre and the associated movements?

Hassan Amin: Punk itself has existed in different incarnations since the 60s, and I would suggest people do their own research into the matter and build their own opinion on its history. The style of punk I do with my bands is rooted in the 80s strands of it, when punk spilled over into different musical territories, and acquired a more radical political stance and a DIY (Do It Yourself) ethic. Such hardcore punk, crust punk, d-beat, grindcore, etc bands existed everywhere from Japan to Sweden, America to Britain, even in oppressive states such as the USSR and its satellite states. Today we can find some of the most thriving DIY scenes in places like Indonesia and Malaysia. It’s safe to say that punk has always been a global phenomenon, not bound by borders or restricted by language. 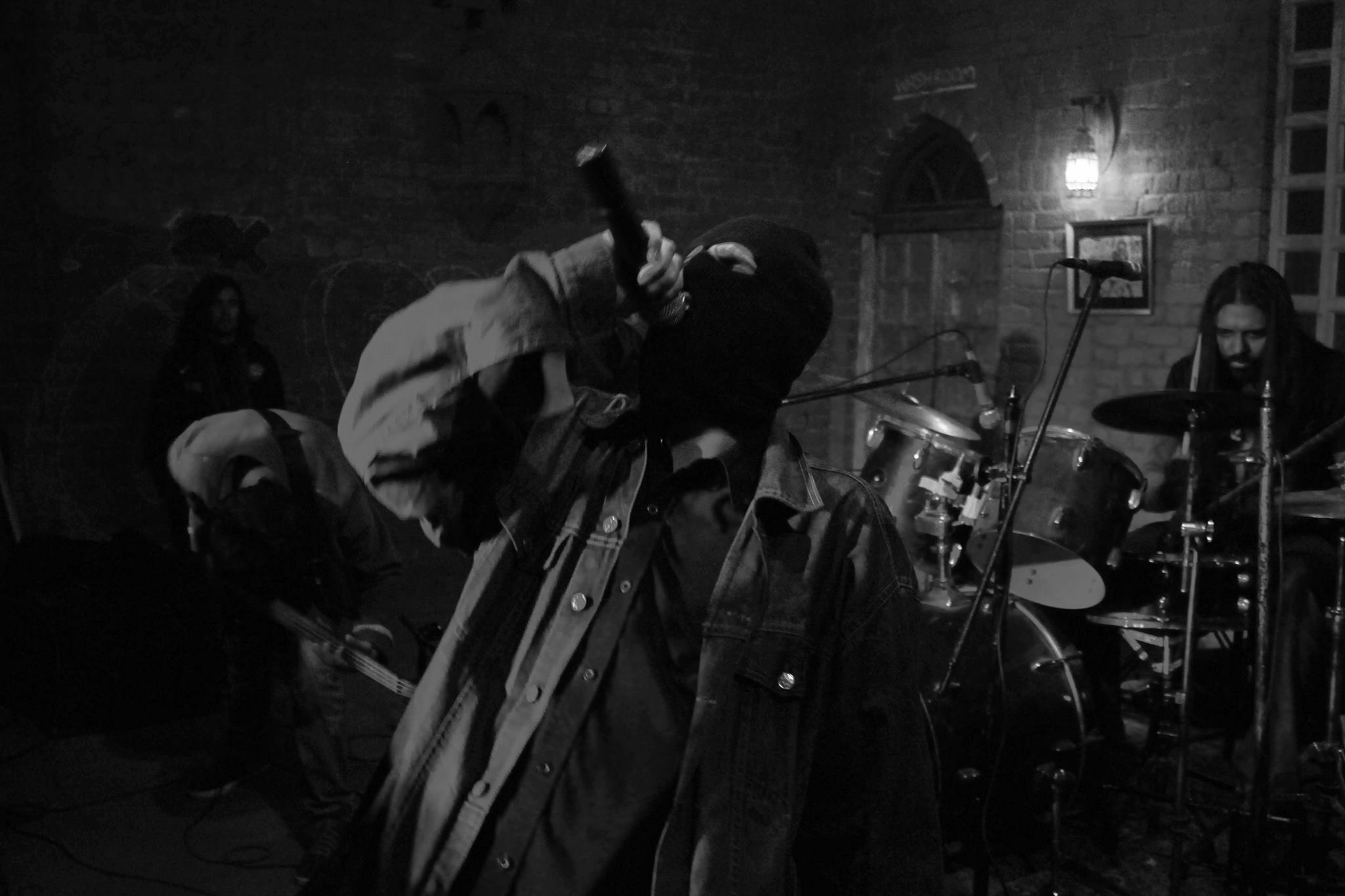 Your band Multinational Corporations has garnered international acclaim with the EP “Jamat-al-Maut” (2014) being released on multiple formats in Europe, Asia, North America, and even Latin America, while there is no attention given to the underground scene by Pakistanis themselves, how do you feel about that?

Hassan Amin: It isn’t a point of concern to me. No one starts a grindcore band expecting to be famous. Bands like ours don’t play to 30,000 people every fortnight or make it on the radio. We do it for ourselves, first and foremost. We wrote “Jamat-al-Maut” as a document of our lives, our thoughts, our ideals at that point in time, and also because there was no-one else doing this kind of music in Pakistan. The response has been great, it’s been issued and re-issued on different DIY labels across the world, we’ve had shirts out as well, but it’s just really normal for our scene. The people in the international punk community tend to be very supportive, bands are always getting released, merch is always being made and good music is always being spread out to good people. And for what it’s worth, the local response has actually surprised me and continues to surprise me.  We managed to sell tapes, cd’s, shirts locally, have killer live shows and create our own ecosystem so to speak. Local kids have gotten into extreme styles of punk and that’s always encouraging to see. Besides, these are just early days. We’ll be around for a while. 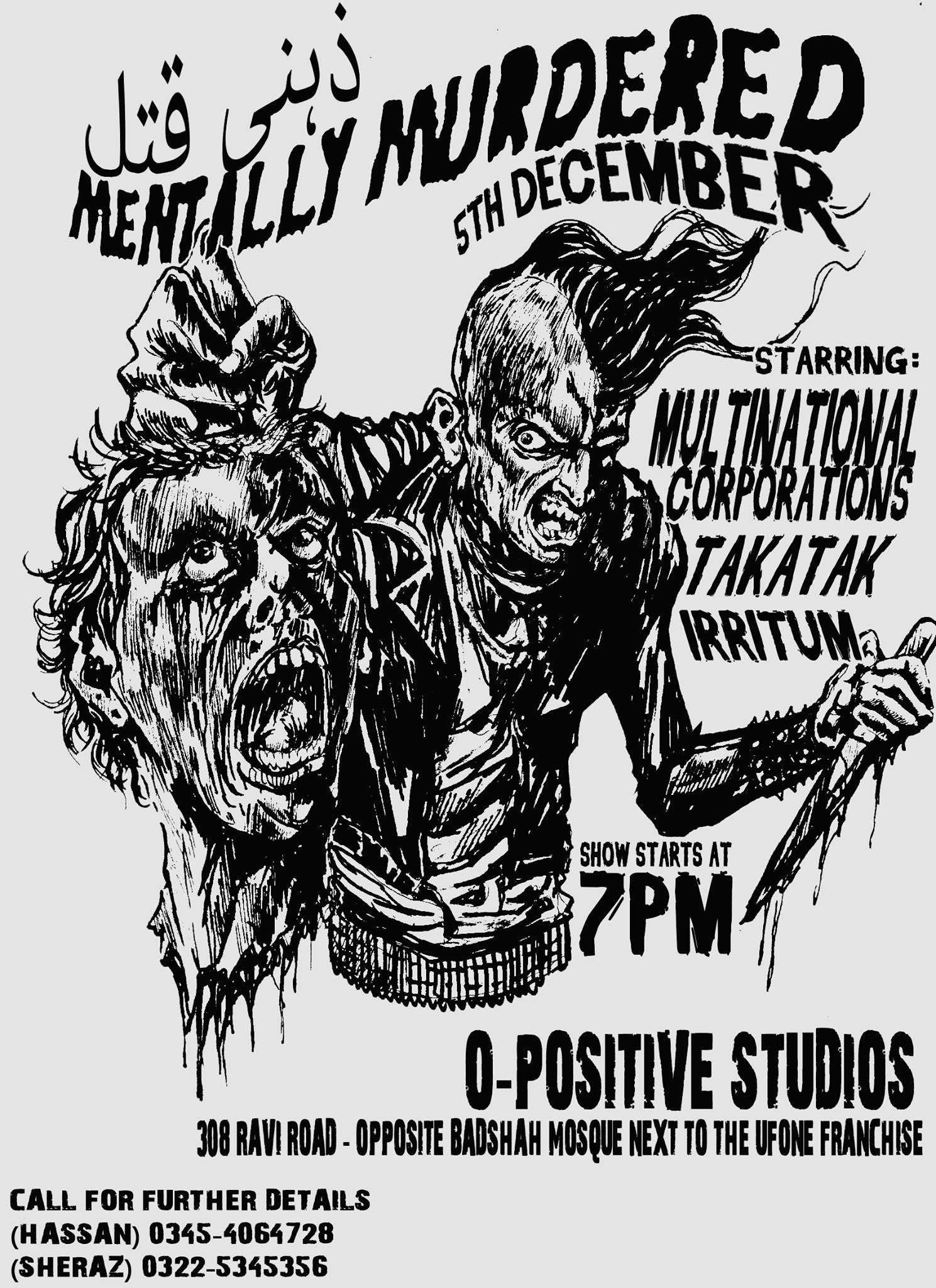 Songs like Salaab and Stratum Slave shed a critical light on the Pakistani society and show the hypocrisy of Pakistanis and the system. Can you describe the philosophy behind these songs and your philosophy towards writing lyrics in general? They sound very politically charged and critical of humanity on large to me.

Hassan: When writing lyrics, I just write down my thoughts regarding an issue that’s on my mind. Hence we have songs about wage-slavery like Stratum Slave, reactionary tendencies like Salaab, among others. Whatever topic I choose to tackle is always researched because the world is already full of ‘kachay pakkay’ opinions anyway. As far as philosophy goes, I wouldn’t want to pigeonhole us into a specific little category, but the type of punk I listen to has always been anti-oppression and pro-collective good. Not very different from the type of poems Habib Jalib wrote.

The biggest problem that is faced by musicians based in Lahore is the lack of shows, would you hold the government responsible for the role it plays in making it almost impossible to organise a show in Lahore? Would you call the tactic oppressive?

Hassan Amin: While I agree that the conditions aren’t satisfactory, I still feel that it’s a lazy argument to make, especially in our scene. The thing is, if you play “underground” music, you shouldn’t sit around and wait for your government, or your parents or even your friends to help you out. You’re always going to be against the status-quo, one way or another. So it’s better to just go the DIY route and figure your own stuff out. Over the last few years, we’ve done shows everywhere from backyards to classrooms. We’d arrange the sound, work out the finances, print posters, do everything ourselves. It’s not different at all to how punk and metal bands operate in other countries either. At the end of the day, it’s about creating the type of environment you want, to facilitate your interests. 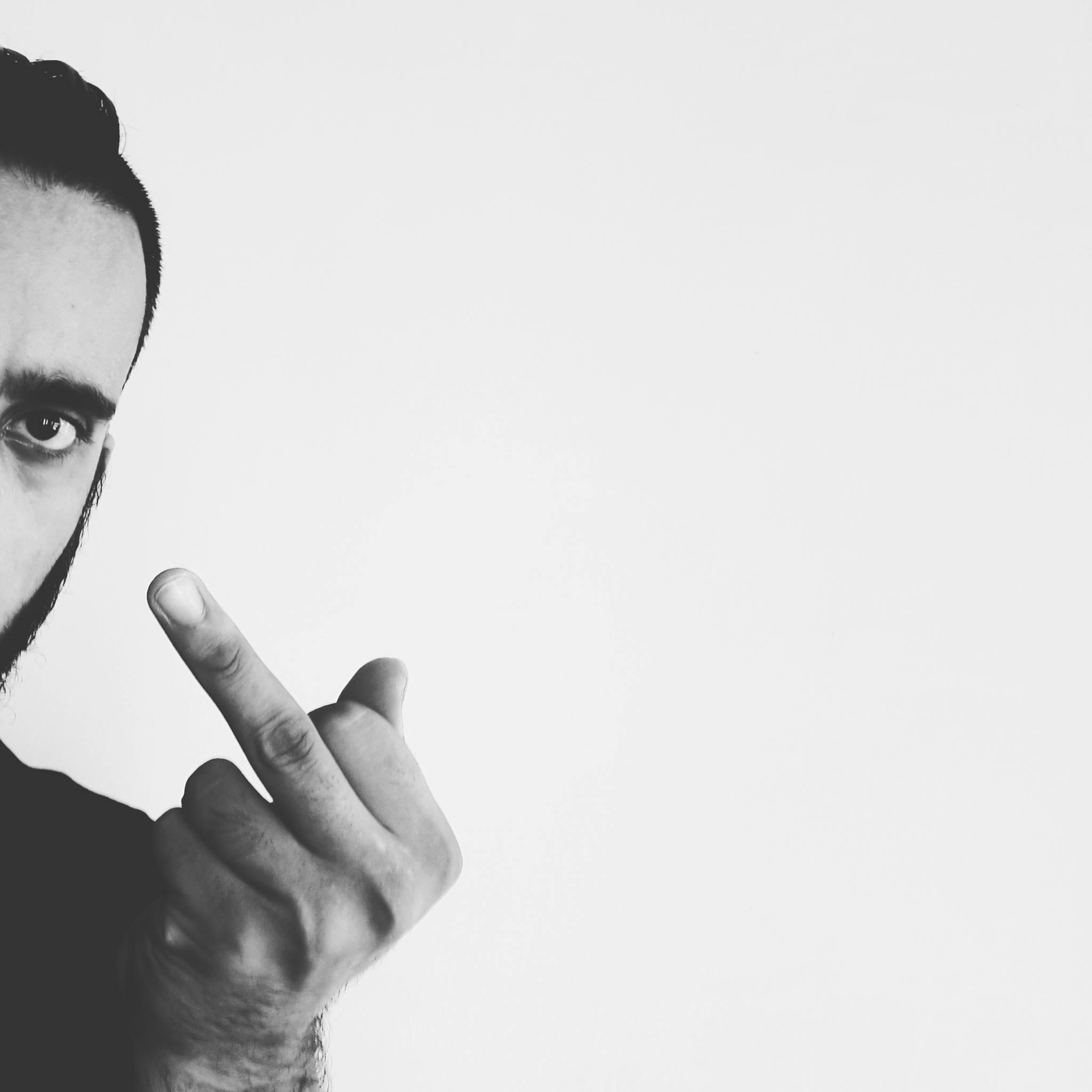 I’ve seen the struggle you face while organising gigs, do you ever feel like giving up and let things be the way they are?

Hassan Amin Depends on a lot of factors, really. As with any hobby, the motivation level can vary. If I’m busy working on a film set, I wouldn’t have the free time to put on a show. But in general, if I have the free time as well as the right people around me, it’s something I look forward to doing. I’d like to think that I’d be putting on shows even if I move to another country.

You are coming up with a new punk EP with an outfit called the Dead Bhuttos, can you explain in detail what the band is about?

Hassan Amin: Dead Bhuttos actually formed sometime in the mid-2000s, by Kominas bassist/vocalist Basim Usmani but it fizzled out when he moved back to the USA. This year he came back to Pakistan for a few weeks and he hit me up. I picked him up from the airport and we immediately started talking about making music together. We decided to use the Dead Bhuttos name because of the obvious Dead Kennedys reference (an influential punk band from the late 70s/early 80s). I got Sheraz from MxCx involved in it too, and he played the drums, as well as recording the guitars and handling the production. The result was 3 tracks of unrelenting desi punk with lyrics in Urdu. It’s the type of stuff I’ve wanted to do for a long while and I’m really glad how it all came together. The EP “Democracy is the Best Revenge” will be out soon on vinyl and tape, as well as a digital version.

What’s interesting about your musical journey is that you don’t play an instrument yourself. Does that make recording hard for you?

Hassan Amin: Not really. Part of being a good frontman is to know how to time your vocals, know breathing techniques, how to shout and scream without straining yourself. The recording has never really been hard for me, I’m always excited to record new stuff and I’ve learned a lot of things along the way as well. Some of my favourite personalities in extreme music were people who only did vocals. However, I do know many vocalists who have a hard time understanding the basics but I would put it on a lack of music knowledge, rather than not being a musician.

Hassan Amin: Yes, there’s always something in the pipeline, but nothing I would like to reveal at this point in time.

Tell me about your interest in film, when did that start? Did you always plan on being a film maker?

Hassan Amin: I never wanted to pursue filmmaking until I saw some films by Stanley Kubrick and David Lynch which exposed to a whole new world from thereon in. After dropping out from a BBA degree with a 0.8 GPA, I thought “screw it” and decided to study film.

Pakistani film industry is re-surging but we seem to see that only Bollywood-inspired song and dance numbers with no content or plot are being made. How do you feel about that? Would you do the same? And do you think such films are ruining the movie industry?

Hassan Amin: My only opinion on the matter is that there’s no harm in making ‘awami’ films that can appeal to everyone. Every kind of film has a separate target audience, and some films have a bigger target audience than others. Moreover, everyone wants to have a good time and what better way than watching a fun movie? However, there isn’t just one way to do that and I hope that Pakistani filmmakers start putting more thought into the visual aesthetics and narratives of a film rather than just copying things with a surface-level understanding.

Your short film “VEHAM” was selected for the South Asian International Film Festival, in the 'HBO Short Film Competition' category. Moreover, it’s also the world premiere of your short film. How did that happen, and tell us a bit about how you made the film?

Hassan Amin: The film was shot in 2 days for my university thesis. A lot of planning went into it, and as a result, we didn’t face too many problems when shooting it. It helped that the crew was tight-knit and disciplined, and everyone went the extra mile. As far as the festival is concerned, I wasn’t gonna just sit with the film languishing in a dusty old hard drive in my cupboard haha. SAIFF caught my eye because the festival features films from native South Asians as well as people from the desi immigrant diaspora. I sent my film and they apparently liked it, that’s pretty much how it happened. I’m looking forward to more screenings of the films in other regions as well, including Algeria, Belgium, Canada, India as well as good ol’ Pakistan.

Finally, are you working on any new scripts and what are your career plans? Would you stick with the gritty stuff you did in film school or will you move to greener pastures for bread and butter?

Hassan Amin: I don’t have any career plans apart from continuing down this path. Being on a film-set and working hard to make something come to life on a screen means the world to me. I honestly just think “ab kia?” whenever I hear the final “pack up!” shout at the end of a film shoot. So let’s see, the future is notoriously uncertain around these parts.

It was an amazing experience interviewing this thorough, amazingly talented gentleman! We hope Pakistanis show their true talent to the entire world because it's about time the world knew our positives.