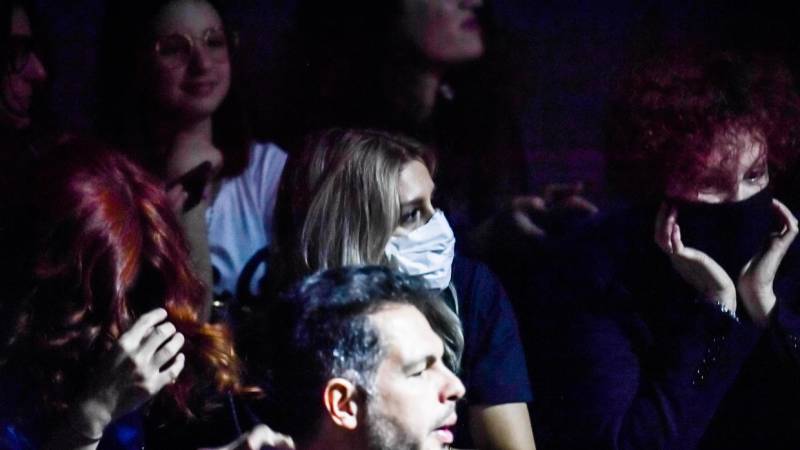 PARIS - Paris women’s fashion week began late Monday with the face mask already its must-have accessory. With two Chinese brands, Shiatzy Chen and Jarel Zhang, missing from the runway because of the coronavirus epidemic, the biggest wardrobe dilemma for fashionistas is whether to wear a mask or not.

Giorgio Armani saved their blushes Sunday by staging his Milan show behind closed doors because of the outbreak of the virus in Codogno, 70 kilometres (43 miles) southeast of the city.

But fashionistas were already wearing masks to earlier shows in the Italian fashion capital before news of the cluster of deaths led to several towns in its Lombardy region being locked down.

Paris Fashion Week, which attracts thousands of buyers from all over the world, is not taking any particular measures against the epidemic, but the fall-out from the crisis has sent shares in many fashion conglomerates plummeting.

Chanel has also put back a show they were due to stage in Beijing in May after “taking into account the recommendations of the Chinese authorities”.

But Bernard Arnault, whose LVMH empire is the world’s biggest luxury goods group, sought to play down the long-term economic impact of the virus.

“The Chinese government have taken the problem on frontally, and in a transparent manner and efficient manner I think,” he told French radio.

Chatter over coronavirus, and the rising prices of face masks, which wags claim are becoming a luxury item themselves, have somewhat overshadowed the Paris debut of young Nigerian designer Kenneth Ize.

The 29-year-old has made a name for himself reinterpreting traditional West African fabrics such as the also oke cloth woven by the Yoruba people, and counts supermodel Naomi Campbell among his fans. Having studied in Vienna under the Turkish Cypriot British designer Hussein Chalayan, Ize has had a meteoric rise.

Although he has been showing on and off in Lagos since 2013, he showed a menswear collection last year in a friend’s Paris apartment and found himself shortlisted for the prestigious LVMH prize.

His debut comes after the Cameroonian creator Imane Ayissi made history last month by becoming the first black African designer to be admitted to the elite ranks of Paris haute couture. Like Ayissi, Ize is a champion of traditional African fabrics and techniques with the LVMH jury praising his “authenticity and the fight to source and produce locally in Nigeria”.

His autumn-winter collection in Paris is inspired by his memories of going to church with his mother, with everyone in their Sunday best outfits. Ize’s is one of four labels making their Paris debut alongside French brands Coperni and Gaucher, which is led by German designer Marie-Christine Statz, and the Japanese brand Noir Kei Ninomiya.