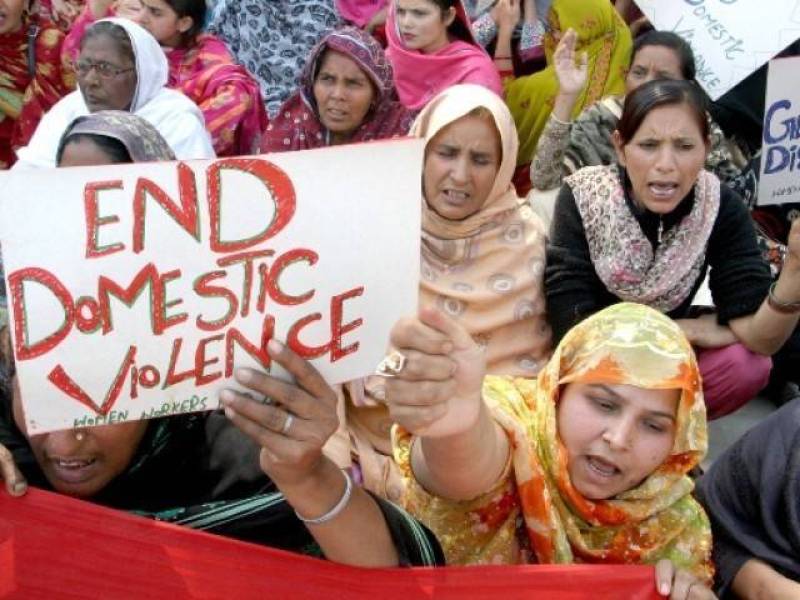 Why are the members of Council of Islamic Ideology always under fire? Probably, because of their extraordinarily 'thoughtful' suggestions on Islamic law and practice.

Their ruling that a DNA evidence is not admissible in rape cases, their announcement in support of child marriages, and now their proposed "women protection" bill -- permitting men to beat their wives "lightly" -- are just a few examples of how thoughtful this constitutional body is.

Coming to the bill: although it has a few welcome provisions, the clause permitting the light beating of disobedient wives has caught the public's attention. Many, including the Special Assistant to Prime Minister on Parliamentary Affairs, have argued that the bill is completely divorced from Islamic teachings, while conservatives have not hesitated to throw their support behind it.

On Tuesday night, a group of activists took to micro-blogging website Twitter to highlight their concerns over the bill, causing the issue to instantly trend. Using the hashtag #TryBeatingMeLightly, these twitter users posted some interesting reactions, sound enough to ring bells.

Agree with them or not, these Twitter users have put forward a strong challenge to the CII, daring them to beat them lightly. Viewers are advised not to try this at home.

Self Defense: Defending oneself against any kind of serious threat is also allowed in Islam. It is actually one's duty, after all.

With Love and care, you can conquer the world! Then why not woman?

"Instead of #TryBeatingMeLightly U should be giving enough care & love that I couldn't disobey u my dear man" #CII pic.twitter.com/fqGIKJRy5u

Obviously this is sarcastic! However, even in this situation you must have enough money in your pocket to pay for expensive Nesvita.

Nothing "beats" this though:

#TryBeatingMeLightly a couple eggs, a pinch of salt and pepper, a bit of red chilli, and fry it.

As the great scientist Newton said, "Every action has an equal and opposite reaction."

#TryBeatingMeLightly and I won't take it sitting down. If i go down, i'll take you down with me.

However, sometimes the reaction can be more forceful, something Newton never considered.

#TryBeatingMeLightly and you'll not be left with your hands to beat me ever again.

Karma: What goes always come around!

#TryBeatingMeLightly and wait for the day when your daughter or your sister will be beaten by someone.

Some even offered to send the "lightly" beating men back from whence they came.

#TryBeatingMeLightly and I will send you back in your mothers womb. So you can be born again respecting women.

A light form of beating, is it allowed mufti sb? ?

I think mullahs of CII are "fifty shade fan #TryBeatingMeLightly

Still, you can never escape a contrarian opinion. Disagreement is in the spirit of every debate.

#TryBeatingMeLightly what about this liberals? Quran clearly uses the word "yazrabuhun" in that ayat. pic.twitter.com/ulwALYibld

Viewers are advised not to try this at home.