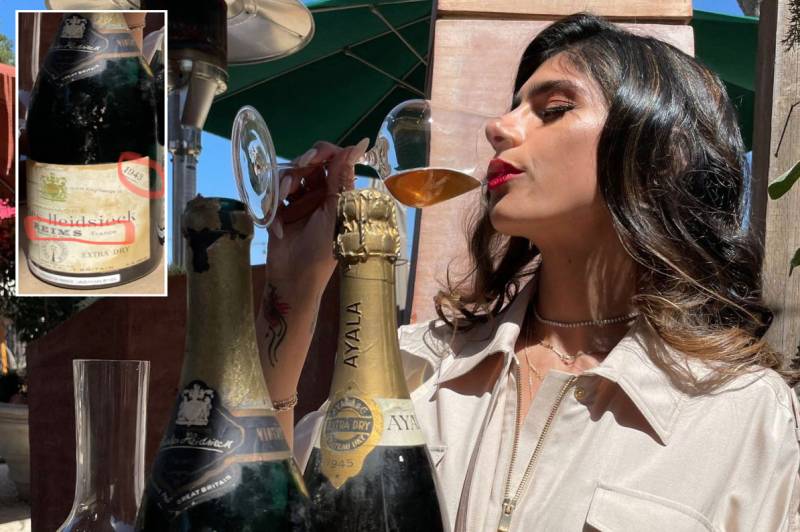 LONDON – Former adult entertainer Mia Khalifa has continued to bash Israel and in the recent post she can be seen drinking a 1943 French wine claiming to be older than the ‘apartheid state'.

‘My wine is older than your apartheid state’, the 28-year-old Palestinian supporter wrote alongside a photo of herself with a 1943 bottle of Charles Heidsieck champagne from France.

My wine is older than your apartheid “state” pic.twitter.com/CTpAitpKZP

Her recent tweet comes less than a month after she called Israeli actresses Gal Gadot as ‘genocide barbie’ over her pro-Israel stance amid the massacre in Palestine that had killed more than 250 persons including children and women.

An Israeli supporter while mentioning her on a microblogging site wrote ‘You’re drinking wine made in 1943 Nazi-occupied France while denying thousands of years of Jewish history in our ancestral homeland. Glad you found the perfect pairing for your antisemitism!’.

Many others accused her of ‘taunting’ Israel by drinking Nazi wine made during the Holocaust.

Soon after the outcry on Twitter, the OnlyFans star denied accusations of anti-Semitism, claiming that the wine had ‘Royal Warrants from His Majesty King George VI’ and that ‘Great Britain was not part of the axis power in 1943’.

The former adult entertainer is no stranger to standing up for her stance against Israeli barbarism and atrocities in Gaza.

Earlier, she speaks out against Israeli oppression in Palestine during the airstrikes from Israeli forces. Mia directly blamed the United States for supporting the Jewish country in the vicious attack that killed at least dozens while hundreds of oppressed remain injured.