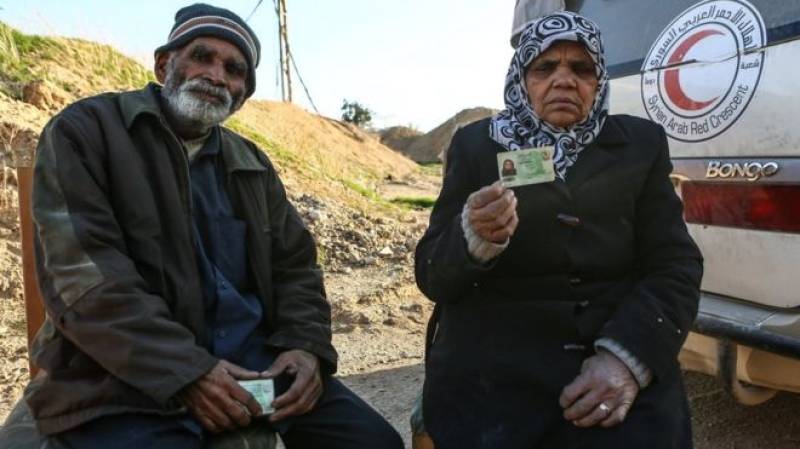 DOUMA - An elderly Pakistani man and his wife have been evacuated from the besieged rebel-held Eastern Ghouta area in Syria during one of the daily "humanitarian pauses".

The Syrian Arab Red Crescent said on Twitter on Thursday that the Pakistani couple had been evacuated and "delivered to the Pakistani embassy in Syria in co-operation with all concerned parties".

They have been named as Mohammad Fadhl Akram, 73, and Saghran Bibi. They had had to leave their two sons, three daughters and 12 grandchildren behind in the town of Douma. "I hope God protects them," Akram told an international news agency. "I don't want anything else."

#YDay 28/2, @SYRedCrescent managed to #evacuate a Pakistani family from #Eastern_Ghouta to #Damascus. The family was delivered to the Pakistani embassy in #Syria in cooperation with all concerned parties. pic.twitter.com/yrCRt4JJHp

The militant enclave outside Damascus has seen some of the worst bombardment and fighting of the Syrian civil war since Russia-backed government forces launched an assault on February 18.

The Syrian Observatory for Human Rights, a UK-based monitoring group, said Akram and his wife were the first people to leave the Eastern Ghouta since Russia ordered daily pauses in bombardment from 09:00 until 14:00 (07:00-12:00 GMT). But it added that their evacuation was the result of months of negotiations by the Pakistani embassy and not the Russian initiative.

“We came across a news story about an old Pakistani couple in Damascus trying to take refuge in the embassy of Pakistan, which belonged to Gujrat district of Punjab province and has been living in Eastern Ghouta since 1988,” Pakistan’s Foreign Office spokesman Dr Mohammad Faisal had said.

Rescuers meanwhile reported that six civilians, including a girl, were killed in fresh government air strikes.

Medics say more than 580 people have been killed in the Eastern Ghouta since the government and its allies intensified their bombardment on 18 February.

The 393,000 civilians trapped in the enclave, the last major rebel stronghold near the capital Damascus, also face severe shortages of food and medical supplies.