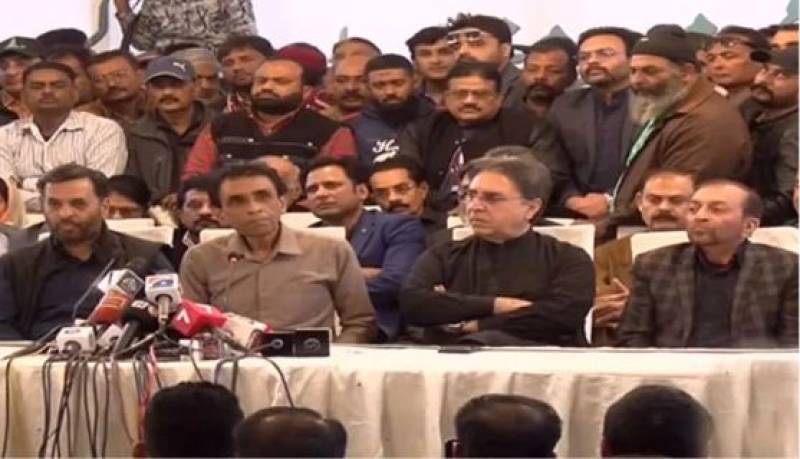 KARACHI – The Mutahida Qaumi Movement-Pakistan (MQM-P) on Thursday achieved its full strength after a long time as estranged leaders Mustafa Kamal and Dr Farooq Sattar — who had formed their separate parties — joined it in a much-hyped merged ahead of local government elections in Karachi and Hyderabad divisions.

Kamal had established the Pak Sarzameen Party while Sattar formed the MQM-P Bahali Committee after developing differences with the MQM-P leaders.

Both leaders announced the merger of their factions into the main party and work under the leadership of MQM-P Convener Khalid Maqbool Siddiqui at a press conference.

Siddiqui opened the presser by stating that worsening situation in urban areas of Sindh required all people to join hands and work together for the development.

All the three top leaders announced that they would not allow the holding of the upcoming LG polls in the urban cities until their reservations regarding delimitations and voters lists are not addressed.

Addressing the press conference, Kamal termed the unification of the MQM-P factions a historic day, adding that from now on decisions would be taken for the development of people.

He also lashed out the Pakistan Peoples’ Party (PPP), stating: “We did not remove the label of RAW [Indian spy agency] from Karachi so that [PPP Co-Chairman Asif Ali] Zardari can impose himself on it”.

He lamented that people of Karachi and Hyderabad were facing unemployment and shortage of basic facilities like the absence of clean drinking water, electricity and others but Zardari wanted to make his son Bilawal Bhutto Zardari prime minister of the country.

For his part, Farooq Sattar hoped that the MQM-P would emerge as a reformed party from today and would work for the people of Karachi jointly.

He also said how the LG elections could be held in Karachi when MQM-P would be staging sit-in on the Shahrah-e-Faisal, one of the main boulevards in the metropolitan.