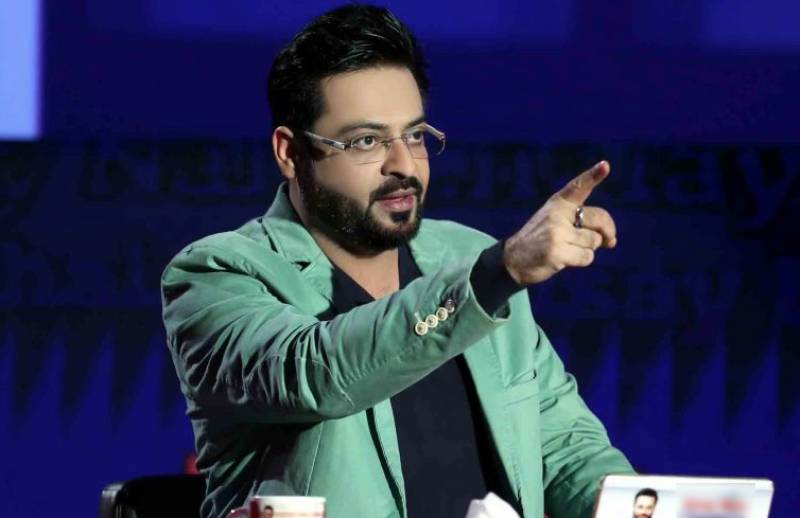 ISLAMABAD – Disgruntled PTI lawmaker Aamir Liaquat Hussain, who was rushed to a hospital after he complained of chest pain, responded with a profane insult to the allegations that he switched his loyalties for money.

The MNA from Karachi, in a social media post, said he will attend the National Assembly session tomorrow even if he has to go in a wheelchair.

He shared a clip on his official Twitter handle after he was pictured with a group of dissident PTI lawmakers who came out in the open and announced they would go against Prime Minister Imran Khan during the vote on the no-confidence motion.

As PTI members staged protests calling out ‘turncoats over horse-trading’, Aamir slammed the ruling party leaders for mentioning him with dissident lawmakers in one of the posters. PTI leaders mocked dissident members with ‘Lotas’ and said they 'sold themselves for money and became part of a foreign conspiracy’.

'How dare you post my picture with these members,' irritated Aamir asked, clarifying that the US had imposed a travel ban on him. He was of the view that people like PM’s aide Shahbaz Gill and other PTI members got foreign funds.

Aamir, the televangelist known for changing his statements, vowed to visit the NA session, but didn’t name the side he would vote for.

The 49-year-old expressed anger with Prime Minister Imran as he was not being invited to events organised by the PTI. Also, he was not given any central position.

Earlier, Aamir called Imran Khan a ‘deposed prime minister’ and taunted him by saying it was not good he was going to be sent home on a holiday. Aamir even said he keeps his licensed weapon with him in case PTI workers create a law and order situation outside the Parliament House. "You know very well where I come from," he said in a veiled threat.