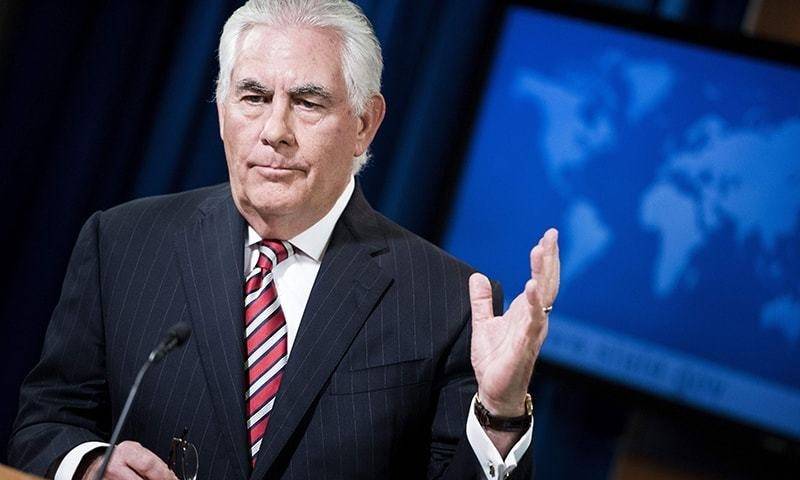 WASHINGTON - US Secretary of State Rex Tillerson has said that Pakistan was willing to knock down terrorists if US engages in intelligence sharing with it adding that Washington was mulling to provide the opportunity to Islamabad in this regard.

Revealing the details regarding his crucial Pakistan tour at the Senate Foreign Relations Committee hearing on Monday, Tillerson expressed that US needed to test Pakistan by giving them information in a bid to let them testify their efforts against terror sanctuaries.

The US diplomat observed that the conversation with the Pakistani government was for them to recognise that they will be one of the greatest beneficiaries of a successful peace process in Afghanistan.

The official continued that he told Pakistani counterparts that they have to begin to create greater stability inside their country and that means denying safe haven to any of these organisations.

Secretary Tillerson said he hoped his visit will pave the way Pakistan reviews the Afghan situation.

'Pakistan will find it in their interests to begin to disassociate these long-standing relationships that have developed over time with certain terrorist organisations,' he noted.

The secretary alleged that Pakistan had long-standing relations with the Haqqani network and the Taliban declaring that the ties might have served their purpose for stability in the past but 'they no longer served that purpose'.

'And it’s up to Pakistan I think, to think about their longer-term stability and their future by changing that relationship with these organisations,' said the chief US diplomat.

When Tillerson was pressed about revealing the minute details of how the Trump administration would change its approach towards Pakistan and what the secretary did in this regard, he responded that he could only share 'some broad contours' of Islamabad visit in a public hearing.

'If the senators wanted more, I was willing to sit with them for a closed hearing' replied Tillerson.

US Secretary of State Rex Tillerson visisted Pakistan on October 24 for a few hours after winding up his Afghan tour.

In his meeting with the Pakistani civil-military leaders, Tillerson was told that Pakistan was committed in the war against terror and was looking forward to moving ahead with the US and building a tremendous relationship.