A pair of big cats died while being moved from Marghazar zoo to a sanctuary near Lahore this week. 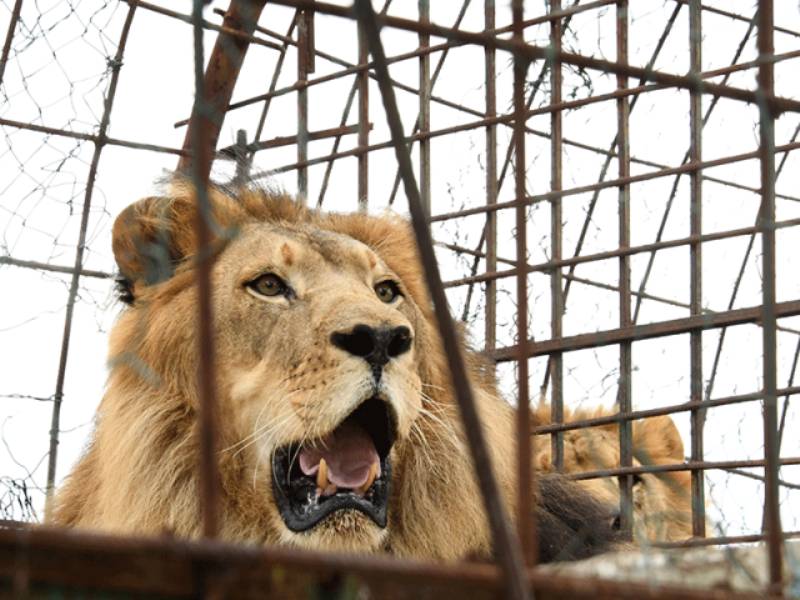 ISLAMABAD – Police in Pakistan capital have booked three people for torturing a pair of lions, which led to their deaths earlier this week.

Kohsar Police Station registered a case under section 429-PPC and section 5 of the Animal Act 1990 over a complaint by a journalist Shakeel Ahmed, the DIG (Ops) Islamabad said in a tweet on Saturday.

The case is based on a video that shows mismanagement on part of the Islamabad Zoo officials, with three persons setting fire in the cage and using sticks to scare off the male lion.

Both the eight-year-old lion and lioness died later, while they were being shifted from Marghazar Zoo to a lion breeding sanctuary in Kasur under directives from Islamabad High Court.

Before that, they were brought to the zoo in 2016 from Lahore Safari Park, as part of the Bird and Animal Exchange Programme between Capital Development Authority (CDA) and the Punjab government.

According to a medical report, the lion had been kept hungry and thirsty as well.

The complainant is yet to provide video footage of the incident to the police to identify the accused for further legal action.

Absolutely shocked at the tragic deaths of two lions due to negligent mishandling during the #Islamabad #Zoo relocation of animals - the #IWMB emergency meeting tomorrow needs to bring out exact causes and fix responsibility for this criminal act of injustice pic.twitter.com/IvWXo7czr8

Meanwhile, Adviser to the Prime Minister on Climate Change Malik Amin Aslam has formed an inquiry committee to thoroughly investigate the deaths of both lions.

PESHAWAR – WWF-Pakistan has expressed its strong concern over the alleged ill-treatment of lion kept at Islamabad ...