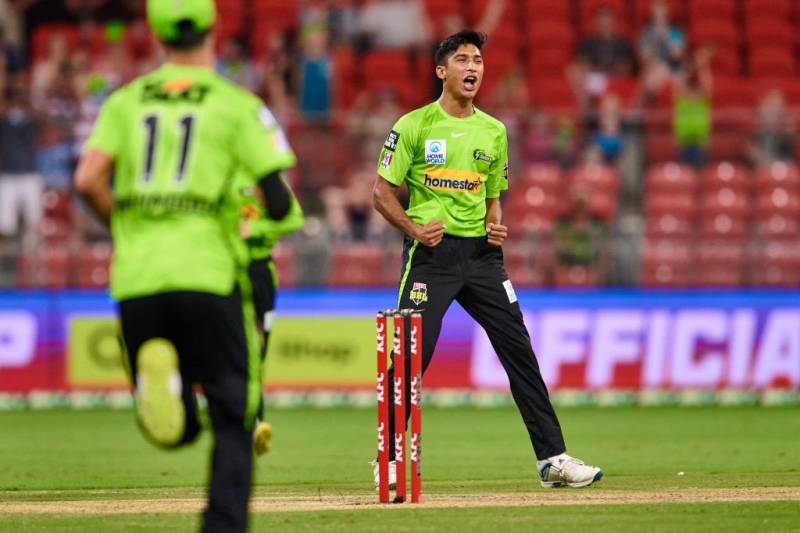 LAHORE – Pakistan’s fast bowler Mohammad Hasnain began his Big Bash League (BBL) journey with a bang as he claimed three wickets in his maiden over while playing against Adelaide Strikers in Australia.

The 21-year-old, who is part of the Sydney Thunder, dismissed Matthew Short, Jake Weatherald and Jonathan Wells in the third over of the match.

Incredible start to his Sydney Thunder career for fast bowler Mohammad Hasnain, with a three-wicket maiden, via @BBLpic.twitter.com/fCLIHRAnpc

Batting first, Sydney Thunder displayed power-hitting skills to set a big total of 172 runs in their allotted 20 overs. In reply, Strikers could only make 144.

The right-arm quick of Pakistan is being widely praised on social media for his powerful debut and #Hasnain has become a trend on Twitter.

Mohammad Hasnain’s first over in Big Bash League is a maiden and produces THREE WICKETS. What a debut for the speedster from Pakistan.

Mohammad Hasnain takes 3/20 on debut for the Sydney Thunder.#BBL11 pic.twitter.com/7ctqoscE9j

What a heart WARMER!!
Mohammad Hasnain - Pakistan pacers and the BPL ❤pic.twitter.com/RDNgPJ4MBW