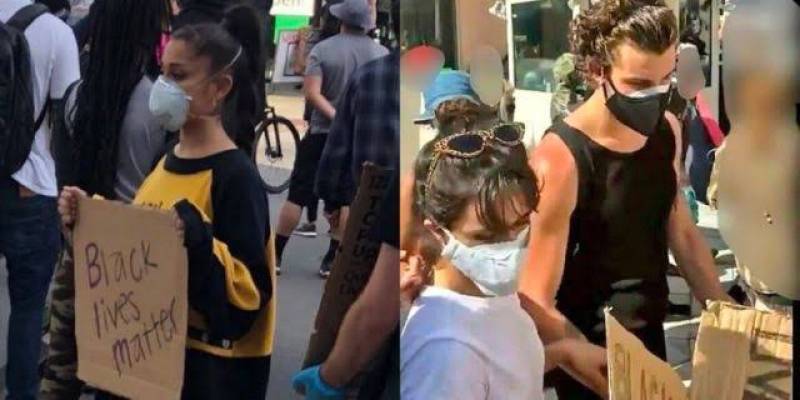 Many Hollywood celebrities aren't sitting around in silence any longer.

A number of A-list stars, like Ariana Grande and Halsey, have protested alongside civilians and activists since the death of George Floyd last week.

Floyd, an unarmed 46-year-old black man in Minneapolis, died in police custody on May 25.

The video of Derek Chauvin, a white police officer, pinning Floyd to the ground with a knee on his neck, while Floyd repeatedly saying he could not breathe, has sparked Black Lives Matter protests around the country.

While some protests turned violent with excessive looting and arrests, others remained peaceful, with several celebrities choosing to march on the streets in solidarity with others to demand further justice for Floyd’s death.

hours and miles of peaceful protesting yesterday that got little to no coverage.
all throughout beverly hills and west hollywood we chanted, people beeped and cheered along.
we were passionate, we were loud, we were loving.
cover this too please. #BLACKLIVESMATTER https://t.co/vD90CEtF94 pic.twitter.com/GZ6uKDfPM7

A post shared by Nashe if ur Nasty (@tinashenow)

Finally home from the Miami protests in Bayside. We were thousands strong and peaceful as fuck and then shit got rowdy a bit after I left and people are being tear gassed, rubber bullets are flying from snipers and police are in FULL gear. Shit is real. STAY SAFE AND PROTECT