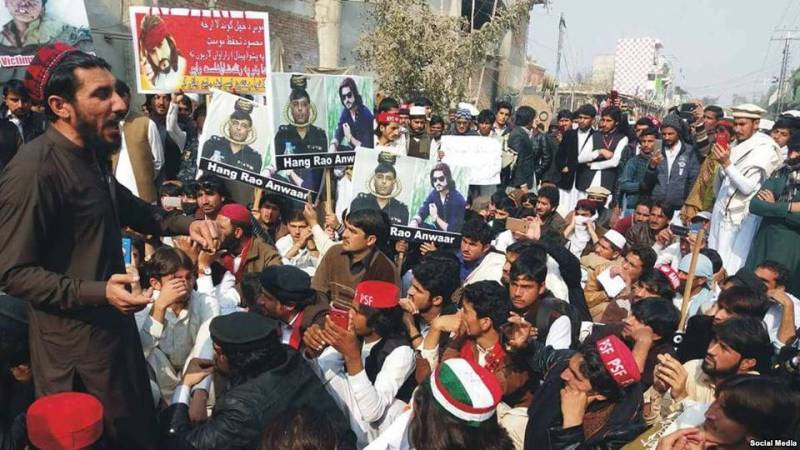 The military has traditionally relied on support from segments of the population deeply adhering to Islam and Islamic values to fulfill its geo-strategic goals over the course of decades in a country which came into being in the name of Islam in 1947. All armed conflicts with India, the US-backed guerilla warfare in Afghanistan against former USSR in the 1980s and many subsequent insurgencies in occupied Indian Kashmir were fought with the overt and covert support of people with Islamic credentials, particularly from the country’s northwestern region.

Defensive geostrategic game after a reversal in Afghan Policy

Islamabad officially reversed its policy and turned the guns against the militants when the US-led Nato forces invaded Afghanistan in late 2001 following Al-Qaeda’s attacks at key military and strategic facilities in the US. Nonetheless, 17 years down the line, no one in the western capitals is willing to trust that Pakistan has fully abandoned its ties with the militants in Afghanistan and occupied Kashmir.

Regardless how far the US charge-sheet is credible enough and how far there is an element of exaggeration, Pakistan understandably would not compromise its geostrategic interests in the region and would not like Indian footprint strong enough in Afghanistan to destabilize a nuclear Islamic state.

Washington backed out from almost all of its public and behind the scene commitments to shield Islamabad’s political and geostrategic interests in Afghanistan and resolve the longstanding Kashmir dispute notwithstanding the fact that Pakistan played a key role in helping the US to occupy the war-torn neighbouring country. Subsequently, this led Pakistan under General Pervez Musharraf to play a double game, something the former military dictator publicly admitted a few years ago on how Islamabad supported Afghan Taliban in the past to counter the overgrown influence of India in Afghanistan.

Now Islamabad has been telling the West that the country is no longer engaged in double games, and that it is no longer making distinction between good and bad Taliban, a reference usually given in the context of fighting with homegrown Taliban being bad ones and turning a blind eye to the alleged sanctuaries of Afghan Taliban being the good ones engaged in long drawn insurgency against foreign troops in the neighbouring country. Washington continues to pressure Islamabad, blaming Pakistan for the mess Americans have been through in Afghanistan where Taliban control much of the territory.

Pakistan being a nuclear state, is a hard nut to crack for the West which no longer can do much to dictate its terms and conditions to Islamabad. With Pakistan itself allying closer to China and Russia strategically, the US is fast exhausting its options to bully Islamabad into bringing Afghan Taliban on negotiating table to win a war, the West has virtually lost in the battlefield.

The military option for Americans would obviously be off the table in any possible geo-strategic calculations to compel Islamabad to surrender its interests in the region.  But it doesn’t mean that other options are not there for the US and India which together increasingly see Pakistan army jeopardizing their geostrategic games in the region.

Internally the establishment has made gains in what it perceives to be broader threats to its geostrategic interests in the region. The MQM under Altaf Hussain was a Western and Indian outpost in Karachi which now stands demolished after a successful crackdown against its terrorist wing during the last couple of years. The ousted Prime Minister Nawaz Sharif “perceived within the military to have been conspiring to derail country’s geostrategic regional policy”, is facing an inevitable political extinction after he was ousted by the Supreme Court for concealing his overseas assets last year. However, a bigger internal threat which has been wittingly and unwittingly ignored in Pakistan over the years, has now finally raised its head and the caught the military establishment by surprise. And that is festering humanitarian crises of enforced disappearances, particularly in country’s northwestern region.

For more than 17 years, I have been covering protests of victim families of enforced disappearances. They were in dozens and rarely in hundreds in number and now thousands are taking to the streets. They have been sloganeering publicly on how elements within the military-run intelligence services allegedly played tactical games in cahoots with Pakistani brand of Talibans.

The founding father of such games was General Musharraf under whose command thousands of people with grown-up beards apparently with no militant background were allegedly picked up and sold off to Americans. They were not involved in the militancy but were showcased to the US as potential threats to Western interests. This helped Musharraf to perpetuate his dictatorship at the cost of great human miseries.  Unfortunately, his legacy is far from over. There are growing allegations that people were picked up on mere suspicion during military operations in Swat, North, South Waziristan, and other tribal belts in addition to intelligence-based security operations in Karachi and elsewhere in the country.

The mainstream political parties like Muslim League Nawaz made enforced disappearances a part of their election agenda during the last two general elections. However, the government failed to fulfill its promises as Nawaz Sharif was not ready to take on the establishment to risk his ouster. After 2007, the superior courts have been demonstrating their independence in cases against political figures but have been avoiding to do so while dealing with thousands of enforced disappearances since these involved country’s military-run secret services. The orders of superior courts were ignored by secret services in most of the cases.  And the courts have done little to ensure the implementation of their orders.

The Parliament provided blanket immunity to secret services from prosecution over past illegal detentions, torture, and killing of citizens through Protection of Pakistan Ordinance in 2014, nonetheless, this did not stop them from illegally detaining suspects. The media largely blacked out to report their miseries less because of fear of retribution and more due to deep-seated bias that people with grown-up beards illegally detained from Khyber Pukhtoon Khawa (KPK) “ must be terrorists”.

Naqeebullah Mehsud who was killed in an extrajudicial manner in Karachi early this year had a short beard and hence had a modern outlook. Therefore, the media and liberal groups supported a dormant Movement for Protection of Pushtoons or Pushtoon Tehafaz Movement (PTM) which came into being in 2014 and it never came in the spotlight until the police killed Naqeebullah along with his friends. The PTM headed by an aggrieved young man Manzoor Pashteen appears to have no motivation other than pressuring the army into release missing citizens, demining the landmines and bringing an end to the humiliation of people at security check posts in the tribal region.

The KPK being the most religious province in its inward and outward manifestations have been historically a backbone of the military for its geostrategic games in the region. However, now many are disenchanted with the army after large-scale enforced disappearances, a situation which tiny liberal groups are exploiting to debase military’s traditional support.

Progressive elements supporting PTM are glad about how army’s strategic tactics are being discussed negatively and sloganeered publicly. The international media and think tanks are highlighting the movement not necessarily out of love for the cause of victims of enforced disappearances but also because they are enthusiastic on how gradually the traditional support base of the military in the religious segment of the population is fading away in the country particularly in Pushtoon belt.

The sentimental attachment of an overwhelming population with the Islam is such a dominant factor that civilian and military rulers even with secular outlooks had to use and misuse the religion for political and geostrategic considerations since country’s first war with India in 1948 to till now. Since then the tactics and strategy certainly have undergone dramatic changes in carrying out regional geostrategic games. Nonetheless, the power that be, still has no option and foreseeably unlikely to have any other option in the future to bid farewell to the religion in a situation when the US and India would prefer to destabilize a country, not willing to give-in to their demands which if accepted would risk jeopardizing Pakistan’s national security.

The social media has changed the dynamics of public awareness and no longer the establishment can suppress a genuine voice from a large segment of society which historically protected borders side by side with the military.

The military and intelligence establishment must not play any deceptive game to superficially defuse an indigenous movement. It represents a genuine public resentment from a segment of society which is disenchanted with the repeated tactics of the deep-state that continues to pursue an undeclared policy of detaining citizens without any charge-sheet in most of the cases. Sponsoring counter protests is not going to work because people are seriously listening to PTM and relate its agenda to their day to day life when they talk against the military and Pakistani brand of Taliban. The military-run secret services are left with no viable option but to release citizens against whom the security forces have no solid evidence about their involvement in terrorism.

The army may try hardcore militants in military courts against whom the evidence is strong enough. That is not all. The military must use its soft influence on civilian government to ensure that a proper legal mechanism is pursued for the repatriation of citizens who were sold off by General Musharraf. The incumbent army and ISI heads must publicly disown policies of a dictator whose past tactics has been landing Pakistan in one crisis after the other. The landmines in the bordering region need to be defused and demand of PTM on how to manage check-posts must be respected without compromising the security of citizens.  So-called ultra pro-army elements like Zaid Hamid and Amir Liaqat parroting hackneyed allegations against “PTM of being offshoot of Indian RAW, NDS (Afghan National Directorate of Security) and American CIA, would only incense already alienated Pushtoons. The PTM so far is not a foreign-funded outfit. However, if the state institutions mishandle the Pushtoon movement, the PTM can potentially end up in the hands of enemies who would enthusiastically try to turn it into a secessionist movement.

There is nothing wrong with demands of the PTM which only wants the fundamental rights of missing citizens within the constitution of Pakistan.  The Establishment should not encourage a fake counter-narrative by declaring the PTM as an agent of external forces hostile to Pakistan. Such propaganda is only adding insult to their injuries and dividing the society on the basis of the menace of ethnicity.