International day to end impunity for crimes against journalists 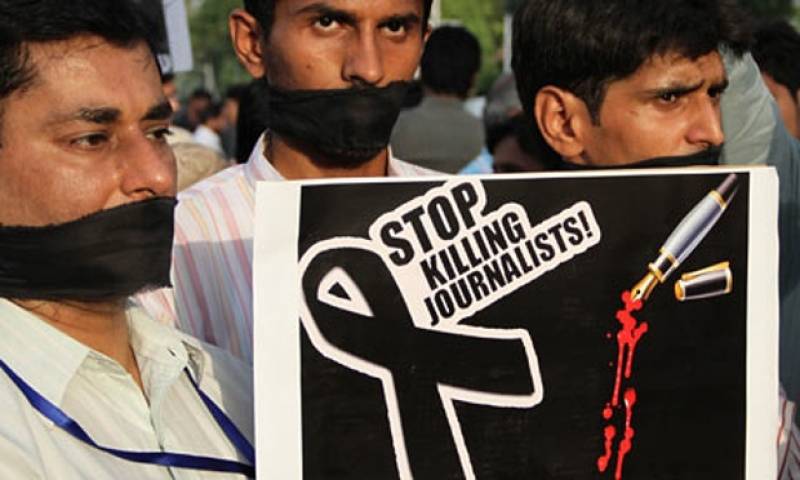 LAHORE (Staff Report) - As the world marks 'international day to end impunity for crimes against journalists' on Monday (today) under the banner of United Nations, the community continues to work in an environment of serious threats to the life in Pakistan.

Since 1994 as many as 56 journalists have been killed in the line of duty in Pakistan and the killers were convicted in only two cases of Wali Babar and Daniel Perl. Another 194 journalists were injured in gun attacks while 40 others were detained by law enforcement agencies and tried for different crimes.

According to committee to protect journalists (CPJ) Pakistan has been listed among the countries where practice of journalism is shadowed by severe censorship despite decade long expansion of electronic media.

Government of Pakistan constituted a commission to look into the murder case of Saleem Shahzad however failed to clearly state the factors behind killing. Journalist unions have been blaming a state organisation for executing the plan to kill the journalist whose dead body was later recovered from Mandi Bahuddin.

Another commission was formed to probe the gun attack on Hamid Mir in 2014, however the body yet remains to file its report. Mir had also blamed country's Inter-Services Intelligence (ISI) for planning the attack in Karachi. He is still living a life under threats.

Cases that are not high profile are covered up at the local level. One such example is that of the fatal shooting of Shan Dahar, reporter of “Abb Takk” TV channel on the night of December 31, 2013 in Badh, in Larkana district. He was shot in his back and was taken to the hospital where he remained unattended until he succumbed to his injuries many hours later on January 1, 2014.

Free media is an essential component of democracy and promotion of transparency and accountability however in Pakistan apparently state is giving a signal that we will watch attackers come and kill the journalist but take no serious steps towards protection of the community or fair trial of the murderers.