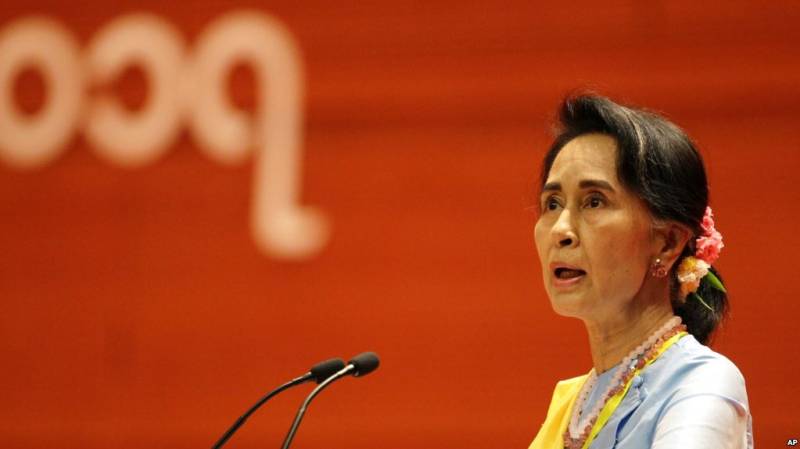 Suu Kyi who was lampooned for flouting the international norms and glossing over the human rights violations in the area is expected to visit two of the epicentres of the violence during her single day visit.

Though the visit was confirmed by the officials, however, it was not clear if Suu Kyi would visit some of the hundreds of Rohinyga villages torched by the army.

According to government spokesperson Zaw Htay, the state counsellor (Suu Kyi's official title) was now in Sittwe and will go to Maungdaw and Buthiduang too.

The nobel laureate who leads Myanmar’s pro-democracy party, drew the ire of international community for her criminal silence over the atrocities faced by Rohinyga Muslims.

Although Muslims in Buddhist majority state are reeling under constant terror ever since the 1982 General Ne Win’s government enacted the Burmese nationality law but a fresh spree of violence sparked international controversy on August 25 when a few insurgents attacked dozens of police posts and an army base.

COX‘S BAZAR, BANGLADESH - As inhumane violence at its peak in Myanmar, thousands of Rohingya are fleeing towards ...

The recent deadliest violence in Myanmar’s north-west has so far claimed nearly 400 lives, with the army claiming it is conducting operations against 'extremist terrorists'.

Myanmar, formerly known as Burma, evacuated more than 11,700 'ethnic residents' from the area affected by fighting, the army said, referring to the non-Muslim population of northern Rakhine.

According to estimates, some 600,000 of the stateless minority have fled to Bangladesh since late August carrying accounts of murder, rape and arson at the hands of the Myanmar's troops.

The UN had stated that the crackdown was tantamount to ethnic cleansing.